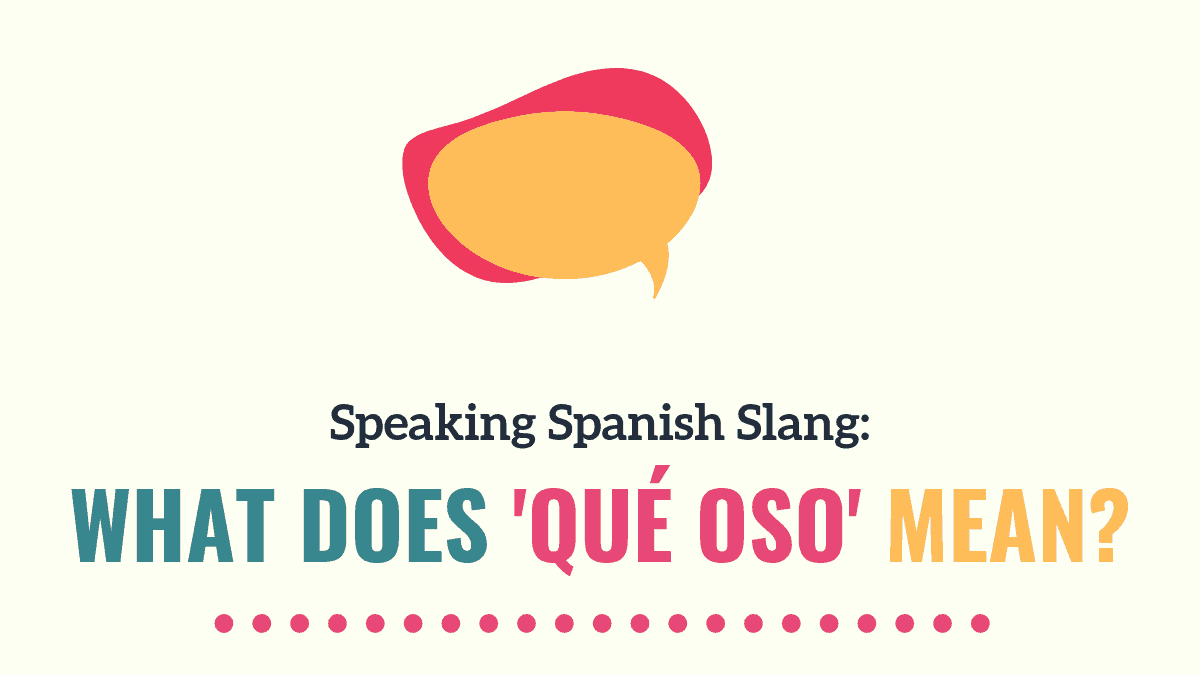 When learning Spanish, most students find that understanding a native Spanish speaker can be really challenging. The problem is that books and language apps don’t show you how to speak slang and Spanish has a lot of slang phrases. One good example of slang you’ll hear in Spanish is the phrase ‘qué oso’.

So, what does ‘qué oso’ means in Spanish? In most Latin American countries, this phrase is slang for ‘How embarrassing’. ‘Qué oso’ is also used in awkward situations where you had made a fool of yourself.

‘Qué oso’ is a common phrase among the Latin American people. So now that you know what it means, keep reading to learn how and when to use it.

What Does ‘Qué Oso’ Mean: When and How to use it

Just as in English, Spanish speaking countries have their own slang phrases to describe a situation. Qué oso is widely used and, as other slang expressions, you can use it with friends or informal situations. Let’s see how Spanish speakers use it:

To express embarrassment for something you did

¡Qué oso! ¡Me caí en la calle! How embarrassing! I fell down on the street!

¡Qué oso! Me dejó plantada He stood me up. This is so embarrassing

¡Qué oso! Me hizo ver como una tonta So embarrassing! She made me look like a fool

To express embarrassment for something that somebody else did

Su madre le gritó enfrente de todos, ¡qué oso! Her mother yelled at her in front of everybody, it was so embarrassing

¡Qué oso! Estaban muy borrachos They were so drunk, it was embarrassing

As you can see, ¡Qué oso! is an expression and because of that, it doesn’t need any grammar to work. And as we saw in the examples, you can use it at the beginning or the end of your sentence. Here is an example of a conversation about how native Spanish speakers would use this expression.

As mentioned before, you would use this expression to talk about something embarrassing that you did or you saw.

What Does ‘Hacer el oso’ Mean?

‘Qué oso’ is a very useful expression for embarrassment, but if you want to go further with your Spanish slang, you also need to get familiar with Hacer el oso.

Just as ‘Qué oso’ is an expression, Hacer el oso is an expression with action (verb). You’ll use it for saying ‘I did something very embarrassing or ridiculous’ or when you make a fool of yourself.

Before jumping into the examples. Remember that Hacer is a verb and as such, you need to conjugate it to indicate the tense and the person you are talking about.

Also, it’s important for you to keep in mind that when using Hacer el oso, native Spanish speakers don’t use it as much in the present tense. After all, you use the present to talk about regular activities and it’s very likely that embarrassing yourself is not part of your daily routine.

Spice Things Up: Intensify Your ‘Qué oso’ to the Next Level

Let’s face it: if you are telling somebody else about an embarrassing situation you went through, it’s because you found it funny and you don’t feel ashamed of sharing it. So for dramatic purposes, Spanish native speakers use phrases like the following. You can see them as a funny preamble for the story you’re about to tell.

When using these phrases, you must know that most of the time it’s going to be hilarious. So don’t use them if you feel ashamed of your story. For using them, add them to the verb Hacer.

Take Note: Don’t forget to change the possessive pronoun when talking about another person.

Don’t be surprised if these intensifying expressions don’t have a literal translation to English. Remember that this is Spanish slang and the only purpose of these phrases is to emphasize the situation you experienced. So when choosing one, don’t think too much, it will be a little bit dramatic anyway 🙂

Does ‘Hacer el oso’ Mean the Same Thing in All of Latin America?

As mentioned before, ‘Hacer el oso’ means the same in most Latin American countries. But if you visit Argentina or Uruguay, you would find that this expression has a different meaning.

In these countries, Hacer el oso means to play dumb. Keep in mind that this meaning is only for those two countries. The rest of Latin American countries we call this: “hacerse el tonto”.

Since the meaning of Hacer el oso is completely different in Argentina and Uruguay, it’s very likely that you can’t use the phrases to intensify your expression. After all, they are meant to exaggerate an embarrassing situation.

Where Does the Expression ‘Qué oso” Come From?

Although ‘Qué oso’ and ‘Hacer el oso’ are used with a funny connotation, their origin is not as fun. These expressions come from the Middle Ages and the trained bears that Gypsies and Carnies used to entertain people.

They made bears dance on their hindquarters and perform ridiculous acts. It was people amused with these types of shows that began to imitate the bears’ movements. Haciendo el oso.

After that, it didn’t take long for the expression to be applied to daily life and they started using it to describe ridiculous and amusing acts.

At this point, you’re ready to start using ‘Qué oso’ and ‘Hacer el oso‘ in your Spanish conversations. Don’t forget that we use these expressions for describing an embarrassing, but amusing situation. If you want to add a little bit of drama to your story, you know what phrases to use. And if you are in a more formal situation, use a more appropriate alternative, as they’re listed above.

What does abrazo de oso mean in Spanish? It literally means bear hug. As in English, un abrazo de oso, is a tight hug that you use to show your affection to someone.

What is an osito de peluche? It’s a teddy bear. Although the correct form is oso de peluche, many Spanish speakers just use peluche to talk about this toy.