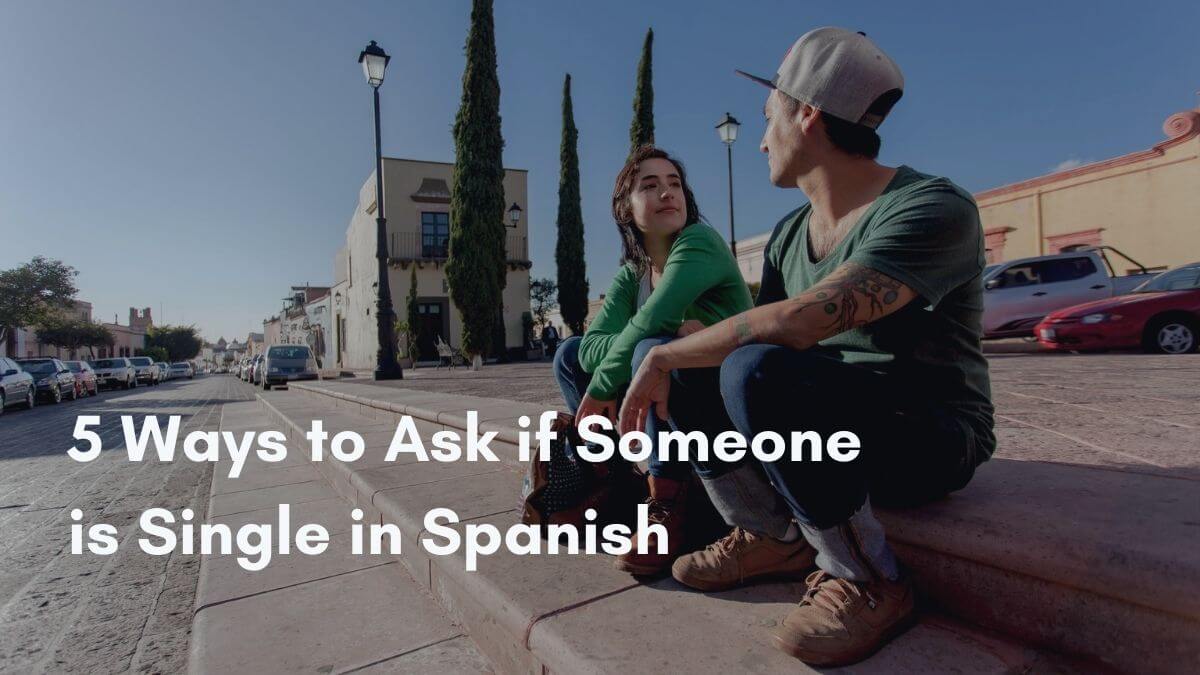 If you’re interested in dating a Spanish speaker (or you’re wondering for a friend), you may need to know if they’re available or if they’re seeing someone else. Even though it may be one of the most common questions to ask, a lot of people wonder how to ask if someone is single in Spanish.

These are different ways to ask if someone is single in Spanish:

All of these expressions are very common to find out a person’s relationship status. However, using one phrase or another will depend on the formality of the situation you’re in. In the following sections, we’ll explain the meaning of these expressions as well as when and how to use them.

In addition to providing you with examples and structures, we’ll also show you how to customize them so you can use them with different people. By the end of this article, you’ll have different ways to ask a person if they are single in Spanish.

¿Tienes novio? is the direct translation of ‘do you have a boyfriend?’. As you may imagine, this is one of the most common ways to ask a girl if she’s single in Spanish. Although it’s very popular, this question may be perceived as too straightforward. For that reason, it’s mostly used among young people.

‘¿Tienes novio?’ is only used when asking directly to the person if she or he has a boyfriend. So if you want to modify this question, you can use this structure and nouns:

¿Alguien sabe si Sandra tiene pareja?
Does anyone know if Sandra has a partner?

Me da gusto conocer, dime, ¿tienes novia?
I’m happy to meet you, tell me, do you have a girlfriend?

Notice that in Spanish the word pareja is a neutral noun that we use if we’re not sure about a person’s romantic preferences. Additionally, pareja also expresses a more formal relationship.

As mentioned above, ¿tienes novio? or ¿tienes novia? may be perceived as too straightforward, but in order to soften it, you can add a comment or another question:

Y, ¿tienes novia? O, ¿estás soltero?
And do you have a girlfriend? Or are you single?

Take note: ‘Novia’, ‘novio’ and ‘pareja’ are formal nouns that you can use in this context. However, depending on the slang vocabulary used in each Spanish speaking country, people may replace them with a different noun. Here, you can check out different words to say girlfriend in Spanish.

Another common way to ask a person if she or he is single in Spanish is by using the question ¿eres soltero? When using this phrase, you just need to be careful of changing the adjective (soltero) to match the gender of the person that you’re referring to.

This question is very standard and it can be used in casual and more formal situations. Additionally, you can change ‘soltero’ for other marital status words such as:

¿La chica que me presentaste ayer está soltera?
The girl that you introduced me to yesterday, is she single?

In these structures, you may hear people using either the verb ser or estar. Although these verbs are used in different contexts, when talking about relationships a lot of people use them almost interchangeably.

Soltero and casado can both work with either verb in a single expression. However, in the case of ‘casado’, if you want to say the name of the spouse, you will need to use ‘estar’.

Take Note: Many people argue that relationships are temporary status and, as a result, you should always use the verb ‘estar’ to describe them. Although there’s some logic behind this, the truth is that you are likely to hear people using both verbs.

¿Cuál es tu estado civil? is the most formal way to ask if someone is single in Spanish. Due to its formality, this expression is mainly used when filling out paperwork, like a form or when you’re in a very formal situation.

Another popular variation of this phrase is the shortened version ¿Estado civil? which you will also use or hear in super formal situations. Here are some examples, notice that if you want this expression to be more formal, you can say ¿cuál es su estado civil?

4. ¿Estás saliendo con alguien? – Are you seeing someone?

If you want to be more casual when asking if someone is single in Spanish, you can use the expression ¿estás saliendo con alguien? This phrase can be either translated as:

¿Estás saliendo con alguien? is mainly used in informal context and, although it’s not a rule of thumb, we also use it as a way to catch up with someone about their romantic life. Despite this, you can also use it to ask a person directly if they are dating someone.

Unlike other expressions from this list, you don’t need to change any adjectives to match the gender of the person that you’re referring to. So if you want to customize this expression, you only need to follow this phrase structure:

¿Sabes si Jenny está saliendo con alguien? Quiero invitarla a salir
Do you know if Jenny is seeing someone else? I want to ask her out

In Spanish, we also use the expression ¿soltera o casada? to ask a person directly if they’re single. This phrase is a funny, popular and cheeky way that we use in Spanish to find out more about the romantic status of someone.

When using this expression, you just need to make sure that the adjectives correspond to the gender of the person that you’re talking to. Aside from this, there are no other changes that you need to make.

Yo soy de México, ¿soltera o casada?
I’m from Mexico, are you single?

¿Soltero o casado? Me gustaría invitarte a salir
Are you single? I’d like to ask you out

Take Note: ¿Soltera o casada? is very straightforward and it’s mainly used when you have romantic interests in the other person.

When learning Spanish and meeting new people it is common to ask them a bunch of personal questions in order to get to know them better. For that reason, in this article, we’ve shown you 5 different expressions that you can use to ask if a person is single in Spanish.

Choosing one of these expressions will depend on the context that you’re in. Additionally, keep in mind that you can also use some of these phrases as a way to catch up with your friends and know more about their romantic life.
Hopefully, now you know how to ask if someone is single in Spanish. ¡Buena suerte!