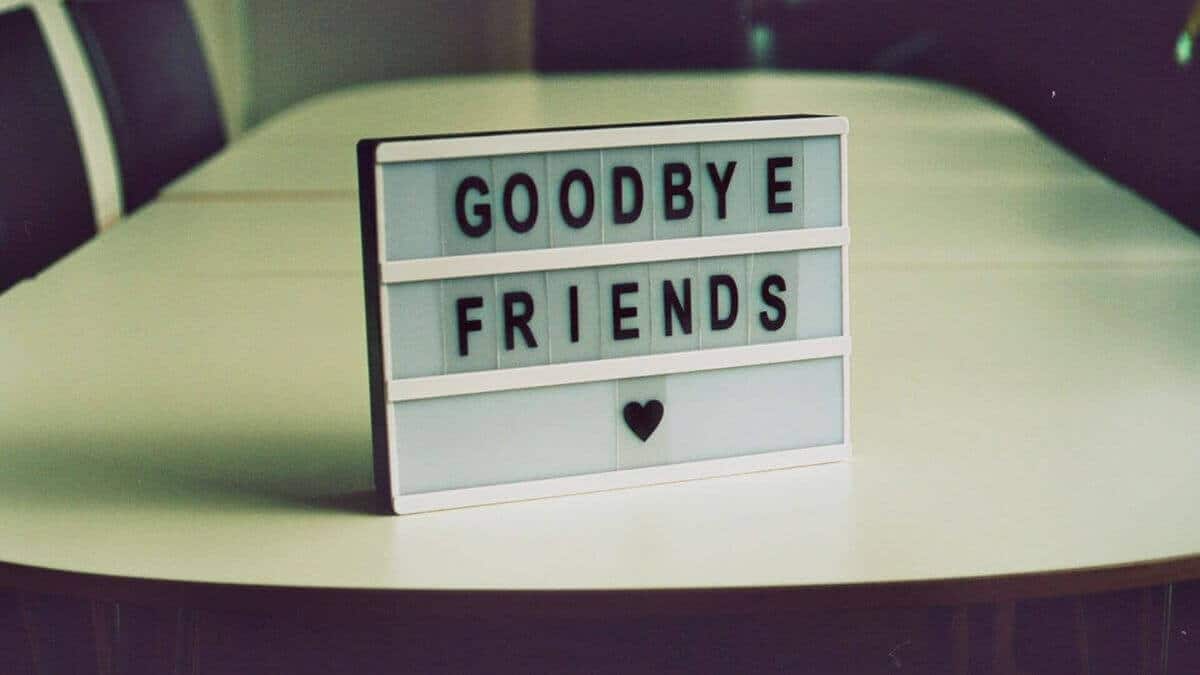 If you’re learning Spanish, it’s very likely that you already know a few basic expressions to say ‘goodbye’. However, when interacting with Spanish speakers, most learners realize that these basic expressions are not always applied by native speakers.

For that reason, on this list, we compiled 13 common ways to say ‘goodbye’ in Spanish. All of these expressions are well known by Spanish speakers and the main difference between them is the contexts and the countries where you can apply them.

If you want to learn other words other than adiós, this list will be perfect for you! By the end of it, you’ll have other options that you can use when saying goodbye in Spanish.

Adiós is one of the most standard and common ways to say ‘goodbye’ in Spanish. One of the advantages of this word is that you can use it both in formal and informal situations. Additionally, it’s very popular in all Spanish speaking countries. Depending on the context, adiós can be translated either as ‘goodbye’ or bye’

¿Ya te vas? Bueno, pues, adiós, fue un gusto verte, amigo
Are you leaving? Well, goodbye, then, it was very nice to see you, my friend

Take Note: As an expression or farewell, adiós can be placed at the beginning, middle, or end of the sentence.

Ahí te ves is a popular, but informal farewell in Mexico. This way to say goodbye is quite popular among all the population, but it’s only suitable for casual conversations. If you want to sound like a Mexican native speaker when talking to your friends or relatives, ahí te ves is the perfect option for you. In order to use this expression correctly, keep in mind that:

Ya me voy porque tengo clase de español, ahí se ven
I’m leaving because I have Spanish, see ya!

Take Note: ‘Ahí te ves’ is a very informal farewell. As a result, make sure you use it in proper situations. Additionally, keep in mind that this expression is only popular in Mexico.

Hasta luego is another standard and common way to say goodbye in Spanish. This farewell is slightly more formal than ‘adiós’. Although it’s not a written rule, ‘hasta luego’ is used to say ‘goodbye’ to people that you’re not very familiar with.

This farewell has some popular variations that you can also use to say goodbye in Spanish:

Take Note: Hasta entonces is quite popular in Spain, but it’s not as common in Latin American Spanish speaking countries.

Although nos vemos is an informal way to say goodbye in Spanish, this expression is another standard and common farewell. Just keep in mind that this expression is meant to be used in casual conversations rather than formal situations. ‘Nos vemos’ is one of the direct translations of ‘see you later’ and it’s more informal than ‘hasta luego’.

Additionally, depending on your intention, there are other variations that you could also use:

¡Qué gusto verte! ¡Nos vemos luego!
It was very nice to see you! See you later

Nos vemos al rato, voy a ir a una reunión
See you in a few, I’m going to a meeting

Take Note: As you may notice, these variations have a small, but important nuance in meaning. Nos vemos al rato is used when you’re saying goodbye for a small period of time. You could use it, for instance, if you’d be seeing this person later that day. Nos vemos luego and nos vemos pronto are a little more ambiguous about the period of time that you and this person are going to be apart.

Even though it’s not a direct translation of ‘goodbye’, in Spanish, cuídate can also work as a caring farewell. This word means ‘take care’ and just like its English counterpart, cuídate is one of the last things people say when saying goodbye.

Generally speaking, this word is used as a farewell when you have a close relationship with the other person. On top of this, since cuídate is the verb form of cuidarse, you may need to follow this phrase structure in order to customize it:

In Spanish, que te vaya bien is a polite and caring way to say goodbye to people. This expression can be used both in formal and casual situations. The only rule that you need to keep in mind is that, normally, this phrase is told to the person who is leaving a place. ‘Que te vaya bien’ means ‘have a good day’ or ‘have a nice day’.

Fue un placer ayudarte, que te vaya bien
It was a pleasure to help you, have a good day

¿Ya te vas? Que tengas buen día
Are you leaving? Have a nice day

This expression is slightly more casual than ‘nos vemos’ and ‘hasta luego’, as a result, it’s perfect for using among friends, family and casual conversations. ‘Ahí nos vemos’ can be translated as ‘later’ or ‘see you later’.

Me divertí mucho, chicos, ahí nos vemos
I had a lot of fun, guys, see you later

Take Note: In some contexts, ‘ahí nos vemos’ can be used to agree or confirm that you will be meeting with a person in a certain place. In this situation, ‘ahí nos vemos’ would be translated as ‘see you there’. However, be aware that this phrase is also very popular as a farewell.

When it comes to farewells, hasta is very useful and if you combine it with a noun, it provides you with a huge amount of variations. In this situation, ‘hasta’ is used to say goodbye in Spanish, but also to inform when you and this person are seeing each other again.

Notice that the translation of this expression would depend on the noun that you’re adding. But, generally speaking, these phrases would mean ‘see you on…’. Here is the phrase structure you need to use.

Hasta el viernes, ¡no vayan a llegar tarde!
See you on Friday, don’t be late

Take Note: Unlike many people believe, hasta la vista is not a very popular farewell. Although Spanish speakers know it, this phrase is not as used as often as other expressions.

Te veo luego is another Spanish farewell that means ‘see you later’. This expression is another casual way to say goodbye in Spanish. For that reason, it’s quite popular in conversations and other informal contexts. Here is the phrase structure that you need to follow in order to customize your farewell:

Take Note: Like many other expressions, te veo luego is a little bit ambiguous about the time when the speakers will meet again.

In some Latin American countries, nos estamos viendo is a popular and casual way to say goodbye in Spanish. This expression implies that the speakers are going to keep in touch with each other. Some of the countries where you can use this expression include:

Amiga, me tengo que ir, nos estamos viendo
Pal, I have to go, see you later

Despídeme de… is a polite and formal way to ask someone to say goodbye for you. This expression comes in very handy when for, some reason, you weren’t able to say goodbye to a person and you want someone else to do it on your behalf. Despídeme de… can be used both in formal and informal situations. Here is the phrase structure you need to follow.

Samuel, despídeme de Carla, me tengo que ir y no la veo
Samuel, say goodbye to Carla for me, I have to go and I don’t see her

Oye, ya llegaron por mí, despídeme de tus papás, por favor
Hey, they came for me, say goodbye to your parents for me, please

Take Note: Decir adiós de mi parte is a slightly more casual variation of ‘despídeme de…’. If you want to use this expression, make sure to use the following phrase structure.

Just like in English, in Spanish, you can use ‘ciao’ or ‘chao’ as a farewell. Using this expression depends more on the speaker’s personal preferences, but in general, it’s only used in casual situations. ‘Chao’ is very popular in South American Spanish speaking countries.

Among elderly people, ve con Dios or que Dios te acompañe is a very common way to say goodbye. Although young people may not use this farewell as much as grown-ups, they’re still very familiar with it. Both of these expressions are formal and caring.

Que Dios te acompañe, hijo, avísame cuando llegues
May God be with you, son, let me know when you arrive

Take Note: For young Spanish speakers, this farewell is a little bit outdated, but it’s still common to hear it from an elder person like your grandmother or grandfather.

Learning different ways to say ‘goodbye’ in Spanish not only will help you build more vocabulary, but it will also allow you to sound more natural and fluent in your conversations.

For that reason, in this article, we compiled 13 expressions that you can use as farewells. Now, you’re ready to go out there and start incorporating these words into your vocabulary.