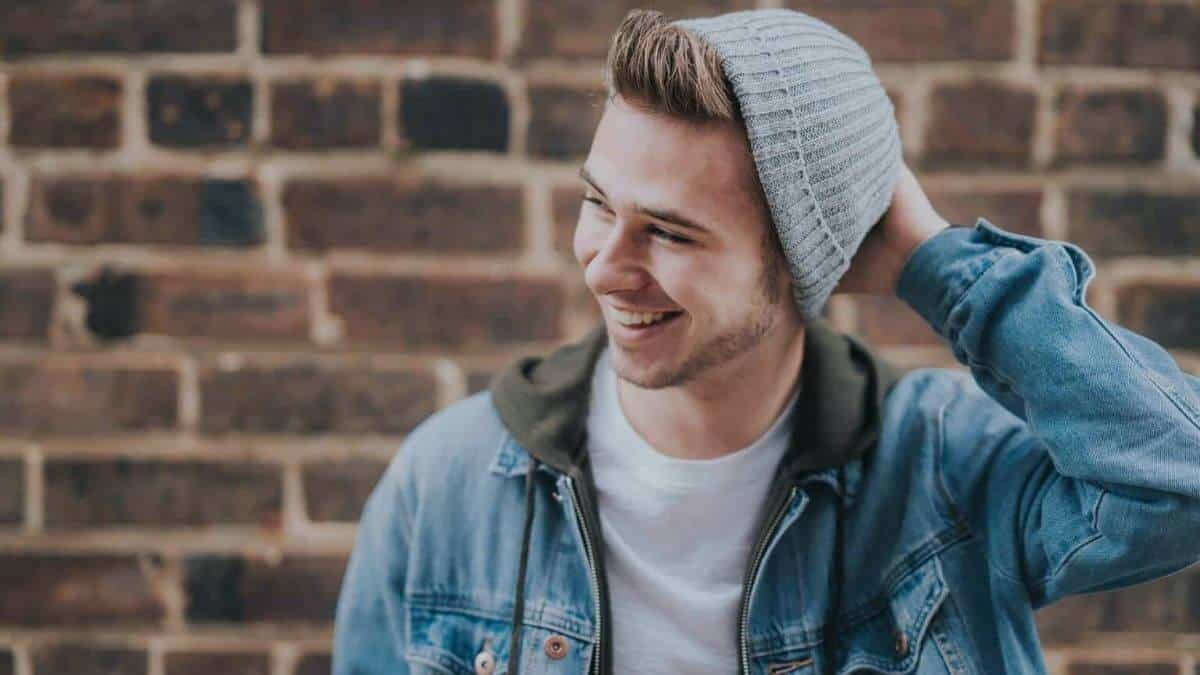 If you’re learning Spanish and find yourself in a situation where you want to praise a boy or describe an attractive man to a friend, you will definitely need some vocabulary that helps you express what you think. That’s why in this article, we gathered a list of 15 words that you can use to call a man handsome in Spanish. Make sure to read them carefully and choose the one that best suits you!

This list covers a wide range of situations, from calling a family member (such as a cousin or sibling) handsome, to telling your boyfriend or a crush you like that you find him attractive as well as talking among your girl pals about a guy you just saw and describing how good-looking you find him.

‘Guapo’ is the direct translation of ‘handsome’. As a result, it may be one of the most common and standard ways to call a man handsome. When it comes to using ‘guapo’ in Spanish, you can use one of the following phrase structures.

In the previous examples, including an adverb is optional since it allows you to intensify the word ‘guapo’.

¡Qué guapo está ese muchacho!
How handsome is that boy!

These are some variations of ‘guapo’, notice that the main difference between them is the degree of intensity.

Take Note: Although ‘guapo’ is the direct translation of ‘handsome’, in informal conversations, it can also be used as a synonym for ‘brave’. This meaning is only common in some South American countries such as: Argentina, Bolivia, Uruguay, and Chile.

The Spanish word ‘apuesto’ is a very elegant way to call a man handsome. On top of referring to a man’s physical traits, this word also implies that the person has a good and nice presence. As a result, it’s a word reserved for a particular type of man. ‘Apuesto’ could be translated either as ‘good looking’ or ‘very handsome’.

These phrase structures are just a basic way to show you how to use ‘apuesto’ in Spanish. However, you can also use this word in other types of sentences.

Take Note: ‘Apuesto’ not only describes a boy’s physical attractiveness, but it also expresses that he has a good presence. As a result, this adjective mostly works with the verb ‘ser’. Additionally, ‘apuesto’ may be considered a formal and elegant word.

‘Hermoso’ can be translated as ‘beautiful’, ‘gorgeous’ and ‘very handsome’. In Spanish, we use ‘hermoso’ to express that a boy is very handsome. However, this adjective is not as commonly used to talk about men as it is for girls. In fact, women use ‘hermoso’ when talking about a boy that has beautiful features.

Like many other Spanish words for handsome, ‘hermoso’ works with the verb ‘estar’. Here are some examples.

¡Qué hermoso está ese muchacho!
How handsome that boy is!

Notice that in this context, we don’t use ‘hermoso’ with the verb ‘ser’. Otherwise, you could be talking about a man’s personality or behavior.

Related: How to Call a Girl Beautiful in Spanish

¿Ya viste a ese chico? Está como un tren
Did you see that guy? He’s so attractive

If you wanted, you could also use this phrase with a boy. However, be aware that it may be considered very forward and direct because you’re talking about him physically.

This Spanish adjective is the direct translation of ‘attractive’, as a result, we can also use it to say that a guy is handsome. Depending on the context and your tone of voice, this word may sound a little bit cold or impersonal. If you want to use ‘atractivo’ as a way to call a boy handsome, you can follow these phrase structures:

If you want to be more direct and use this word directly with a boy, you can use these examples:

‘Buen mozo’ is a Spanish phrase that people use to call a boy ‘handsome’. It could be translated as ‘good-looking’, ‘gorgeous’, or simply ‘handsome’. On top of expressing that a man is attractive, ‘buen mozo’ also describes their personality and presence. As a result, we use it to talk about a handsome and nice boy.

Although this meaning is not implied in the English translation, don’t forget that ‘buen mozo’ also praises a boy’s behavior and personality. Therefore, use it wisely 😉

Take Note: In Mexico, ‘buen mozo’ is a formal and old expression. Therefore, it’s most commonly found in books and tv shows.

In Spanish, we can also use ‘adonis’ to say that a man is handsome. This word is not as common as ‘guapo’ or ‘apuesto’ since it expresses a higher degree of beauty. It’s translated as ‘so good looking’ or ‘good looking man’. Here are some phrase structures that you can use to apply it:

Tu esposo es un adonis, ¿no tendrá un primo?
Your husband is so good looking, does he have a cousin?

‘Bello’ is the direct translation of ‘beautiful’, but it can also mean ‘handsome’. When using this word to praise a boy’s attractiveness we always use verbs that allow us to emphasize in the moment, such as ‘estar’ and ‘verse’. Here are some examples:

Just like the English word ‘beautiful’, ‘bello’ is a complicated word to use when referring to a boy. However, there are many Spanish speaking women that still use ‘bello’ as a way to call a man handsome. In order to keep this meaning, use the verbs ‘estar’ and ‘verse’.

Additionally, we don’t use this phrase directly with the boy we’re talking about. Instead, we use it to describe him to someone else. Here are some examples of how to apply it:

‘Tener buena pinta’ is a Colombian synonym of ‘bien parecido’. As a result, this phrase is used to express that a man is ‘good looking’ or ‘attractive’. Although you may hear this phrase in other Spanish speaking countries, be aware that the meaning will be different. Here are some examples of how to apply this phrase.

¿Qué piensas de ese chico? Tiene buena pinta, ¿no?
What do you think about that boy? He’s handsome, don’t you think?

Additionally, this Colombian expression has another variation. Pintoso is an adjective that Colombian speakers use to say that a man is ‘attractive’ or ‘handsome’.

Although most Spanish learners are not familiar with this word, ‘galán’ is another word that we can use to call a guy ‘handsome’. ‘Galán’ can be used either to describe a boy or as a cute nickname to use with him. This word is translated as ‘handsome man’. Here are some examples:

Hola, galán, ¿cómo estás?
Hey, handsome, how are you?

If instead of using ‘galán’ as a pet name for your boyfriend or husband you want to use this word to describe a handsome man, follow the next phrase structure:

¡Qué galán está ese chico!
How handsome that guy is!

Take Note: In Spanish, ‘galán’ is a very rich word with multiple meanings that get triggered when you use the verb ‘ser’. In these cases, ‘galán’ could mean ‘hero’ or ‘womanizer’. As a result, make sure you use it correctly.

In Latin American countries, ‘papacito’ is a very popular word to express that a boy is very attractive. Although there’s no direct translation for this word, it’s close in meaning to ‘hottie’ ‘ or ‘very attractive’. Usually, we use ‘papacito’ to talk about a handsome man to a friend. You can use it directly with the guy you like if you’re dating.

¿Viste a ese muchacho? ¡Papacito!
Did you see that guy? Such a hottie!

¡Qué guapo está nuestro nuevo vecino! ¡Papacito!
Our new neighbor is so handsome! Such a hottie!

In some Spanish speaking countries, ‘papacito’ may have the following variation.

‘Churro’ is a slang word that is used in Colombia and Peru to call a man handsome. As a result, it can be translated as ‘hottie’ or ‘good looking’. When using this word you need to keep in mind that it is only applicable in informal conversations. Here are some examples:

¡Qué churro está Mateo!
Mateo is such a hottie!

¿Viste al chico churro que venía a un lado de mí en el avión?
Did you see the good looking guy that was next to me in the airplane?

Take Note: As a slang term, ‘churro’ has different meanings depending on the Spanish country you are. Therefore, if you want to use it to call a boy handsome or attractive, use it only in the countries mentioned above.

In countries such as Mexico, Ecuador, Guatemala, Honduras and Puerto Rico, ‘chulo’ is an informal way to say that a man is attractive. It can be translated either as ‘good looking’ or ‘handsome’. Depending on the context as well as their speaker’s tone of voice, ‘chulo’ could also be used as a synonym of ‘cute’.

One way to make sure that you’re using ‘chulo’ to say that a boy is handsome is by using the verb ‘ponerse’ (to get). Notice that by using this verb you will be implying that this man just became attractive.

¿Ya viste qué chulo se puso Sebastián?
Did you see how handsome Sebastian got?

Hace mucho que no veía a Julio, se puso muy chulo
I haven’t see Julio in a long while, he has become pretty handsome

‘Lindo’ is one of the Spanish translations for ‘pretty’, ‘cute’ or ‘beautiful’. Although it doesn’t express a high degree of physical attractiveness, Spanish speakers may also use it to call a boy handsome. However, keep in mind that it is not as strong as other words presented in this list.

Take Note: Lindo is a Spanish adjective that you can use to call a man handsome without being too bold. This word is also used when the girl is not sure about the type of relationship she wants to develop with this boy.

In this list, we presented you with the most common ways to call a boy handsome in Spanish. When applying this vocabulary, make sure you use the appropriate verb along with the term or phrase for calling a guy cute or attractive that properly describes the type of attractive qualities you wish to express. Remember that ‘estar’ and ‘ser’ can change the meaning of these words.

Now, you’re ready to go out there and start calling your boyfriend, a crush or some other guy you see handsome 😉

In this short guide, we will cover the following topics for ‘salir’ in Spanish: What does ‘Salir’ mean?‘Salir’ ConjugationsHow to Use ‘Salir’ in SpanishTo describe the action of...