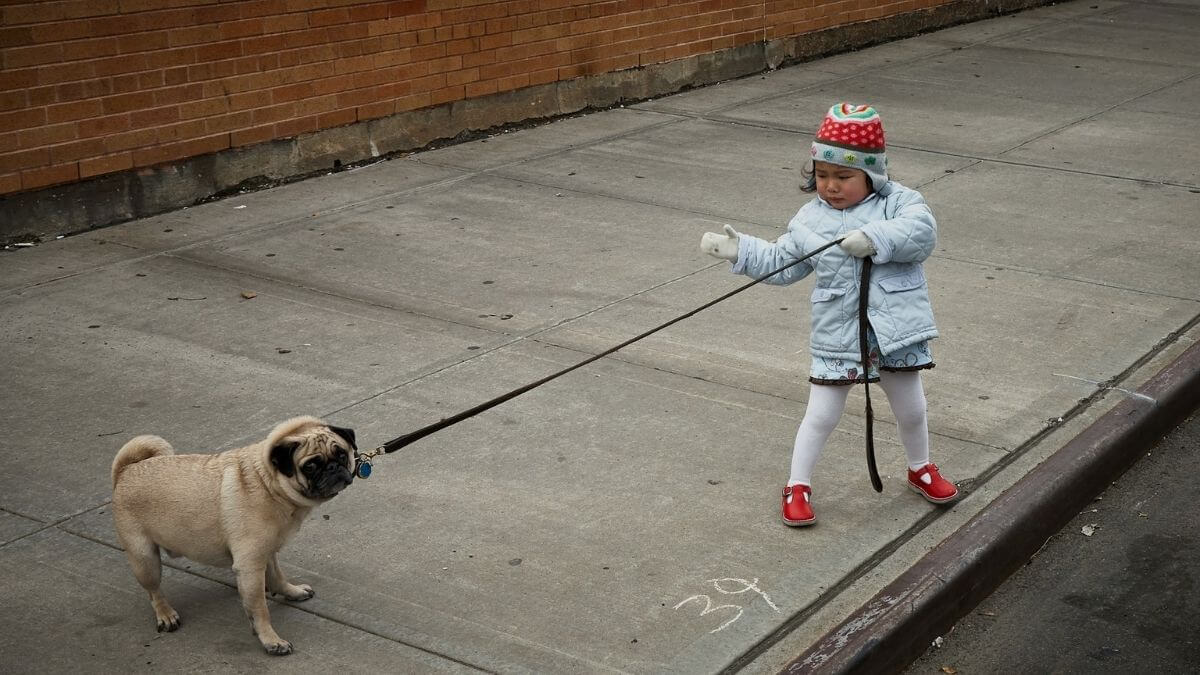 Puppies are the cutest things ever, aren’t they? But a well-behaved dog that knows how to follow basic commands is not only cuter, but also very impressive. What about a puppy that also understands dog commands in Spanish? A bilingual dog… That’s pretty cool!

If you want to pass on your Spanish knowledge to your perrito, in this article, I’ve compiled 11 basic Spanish dog commands that you can teach your puppy.

Here are the dog commands you’ll learn to say in Spanish:

As a bonus, I’ve also included a section with common ways to praise your dog in Spanish, so you can let them know when they’re doing a good job.

By the end of this, not only will you know basic commands for your dog, but you’ll have a fun way to practice your Spanish! ¡Diviértete!

Siéntate is one of the most common basic dog commands in Spanish that you want to teach your puppy. If you want to take your perro to different places with you, you should be able to make them sit and stay calm while you do your errands.

Although ‘siéntate’ is very common, Spanish speakers also use the variation ‘¡sentado!’. Both commands mean ‘sit’ and are very suitable for this context. So, choosing one or the other depends on your personal preference.

Take Note: Siéntate is also a popular command that we use with other people to ask them to take a seat. You can soften this order if you use words such as ‘por favor’ or simply talking with a nice tone of voice. Don’t forget to conjugate this verb depending on who you’re talking to.

When it comes to dog training, echado is the direct translation of ‘lie down’. As a result, you may want to know this command for those occasions when you need your dog to be calm or just rest. ¡Échate! and ¡tumbado! are variations that you can also use.

Take Note: In other contexts, ‘echar’ can be used to talk about firing people and a synonym of ‘to put’, ‘to give’, among other things. In short, echar is a very rich verb in Spanish that you may want to add to your vocabulary.

Quieto is a dog command in Spanish that is perfect for energetic dogs. In this context, ‘quieto’ is the direct translation of ‘stay’. As a result, this super handy expression is used to teach dogs to wait for you or to stay calm when they see something exciting.

Although in this case ‘quieto’ is very common, you could also use the variation ‘alto’. Keep in mind that quietos is the command that you want to use if you’re talking to a group of puppies and if you have a female puppy,

In Spanish, ven and ven aquí are the direct translation of ‘come here’. Since this order can be used to keep your dog away from hazards or other people, ven may even be one of the first dog commands in Spanish that you teach your puppy.

Of course, you can also use ‘ven’ to attract a cute dog’s attention ;)!

Dame la pata is not a command that will teach your puppy to behave, but it’s still a cool trick that you and your perrito can learn to impress your family and friends. Notice that dame is used for the first person singular (yo).

If you want to push your puppy a bit more, you can change the indirect object pronoun (me) to match the person who you want them to give their paw to.

Chico, dame la pata.
Chico, give me your paw.

As a kid I always wanted to have a dog that fetched my newspaper (I didn’t read the newspaper, but it looked pretty cool). Being more realistic, you can use the command trae to play with your dog and keep his manners (and Spanish) sharp!

When it comes to dog commands in Spanish, trae means ‘fetch’. In this case, depending on what you want him to fetch, you can modify this command by adding direct object pronouns. So, we can use ‘tráelo’ for masculine objects and ‘tráela’ for feminine things.

Now, I know that it’s not your dog’s goal to have a Master’s degree in Spanish grammar, but it’s a good opportunity for you to practice Spanish gender and use these pronouns in a more natural way.

As cute as they’re, most dogs will always have something in their mouths (hopefully, nothing too expensive). With this lovely image in mind, you may agree with me that suéltalo is a key Spanish dog command that puppies need to learn.

Suéltalo can be translated either as ‘leave it’ or ‘drop it’ and you could also use the following variations:

In here, it’s important to notice that we’re using direct object pronouns. In human words, this means that you’ll use suéltalo when you want your dog to drop a masculine noun and suéltala when you’re referring to a feminine noun.

If you want, you simply use ‘suelta’ and mention the object that you want them to leave. Here is how we do it:

In Spanish, junto is the command that you want to use to let your puppy know that you want him to walk next to you. In this context, ‘junto’ means ‘heel’ and since you may not want your dog to drag you, this is a Spanish basic command for puppies.

Take Note: In other situations, junto can be used to describe a place’s location. It also helps us express that something is joined to another thing. As a result, junto can be translated as ‘nearby’, ‘next to’, ‘joined’ or ‘together’.

Tu teléfono está junto a mi mochila.
Your phone is next to my bag.

¿Quieres tus postres juntos o en diferente bolsa?
Do you want your bread together or in a different bag?

After I saw Halle Berry’s dogs in John Wick, I knew that I needed to learn how to teach my future puppies to do that. Okay, all jokes (and crazy dreams) aside for now. Ataca means ‘attack’ and, as you can imagine, this is a popular Spanish dog command that you may teach to your guard dogs.

Now, if you notice, ‘ataca’ is a singular command. This means that it can only be used for one dog. So if you have multiple guard dogs, you want to say ¡ataquen!

While most people are not going to train their dogs to guard them or attack people (and I don’t advise that you do), many people teach their dogs to play dead, roll over, or play-attack (in a friendly manner). So, if this is the relationship you have with your dog, you could teach them this as another cool trick!

If your puppy starts climbing on your furniture, you can use the command abajo. Although this is just an example, this word can also be really helpful to keep your dog in place! When it comes to dog commands in Spanish, ‘abajo’ means ‘down’.

Rito, ¡abajo! Ya sabes que no te puedes subir a la cama.
Rito, down! You know that you can’t be on the bed.

Although it may not be part of formal puppy obedience or dog training, ¡cállate! is a popular Spanish dog command that we use when we want our dog to stop barking. In this context, ‘¡cállate!’ can be translated as ‘quiet’ or ‘shut up’.

Silencio is a less aggressive variation, but it’s not nearly as common as ‘cállate’. Don’t forget that if you want to use this command with more than one dog, you’ll need to use the plural conjugation cállense.

¡Cállate! ¿A qué le ladras?
Quiet! What are you barking at?

Take Note: ¡Cállate! is also a straightforward and sometimes rude way to ask a person to be quiet. However, when it comes to people, there are more polite ways to ask someone to shut up in Spanish.

Betty, cállate, no puedo escuchar nada.
Betty, shut up, I can’t listen to anything.

Plus: How to Praise Your Dog in Spanish

If you’re teaching your puppy some basic commands, you may also need some expressions to let your perrito know that he’s doing a good job. Here are some common phrases that you can use to praise your dog in Spanish:

Take Note: As a dog owner (or lover), you may already know that perro is the Spanish word for ‘dog’. However, there are other popular terms that you can use to say ‘dog’ in Spanish and that will make you sound like a native speaker!

If you’re learning Spanish, there are plenty of contexts where you can practice your vocabulary and conjugations. In fact, you can take your puppy’s training as an opportunity to break the routine and use your Spanish in a more fun way.

For that reason, in this article, I’ve provided you with basic commands in Spanish that you can teach your dog. Although this doesn’t feel like studying, by using these simple commands you’ll be able to practice your pronunciation and other important grammatical elements.