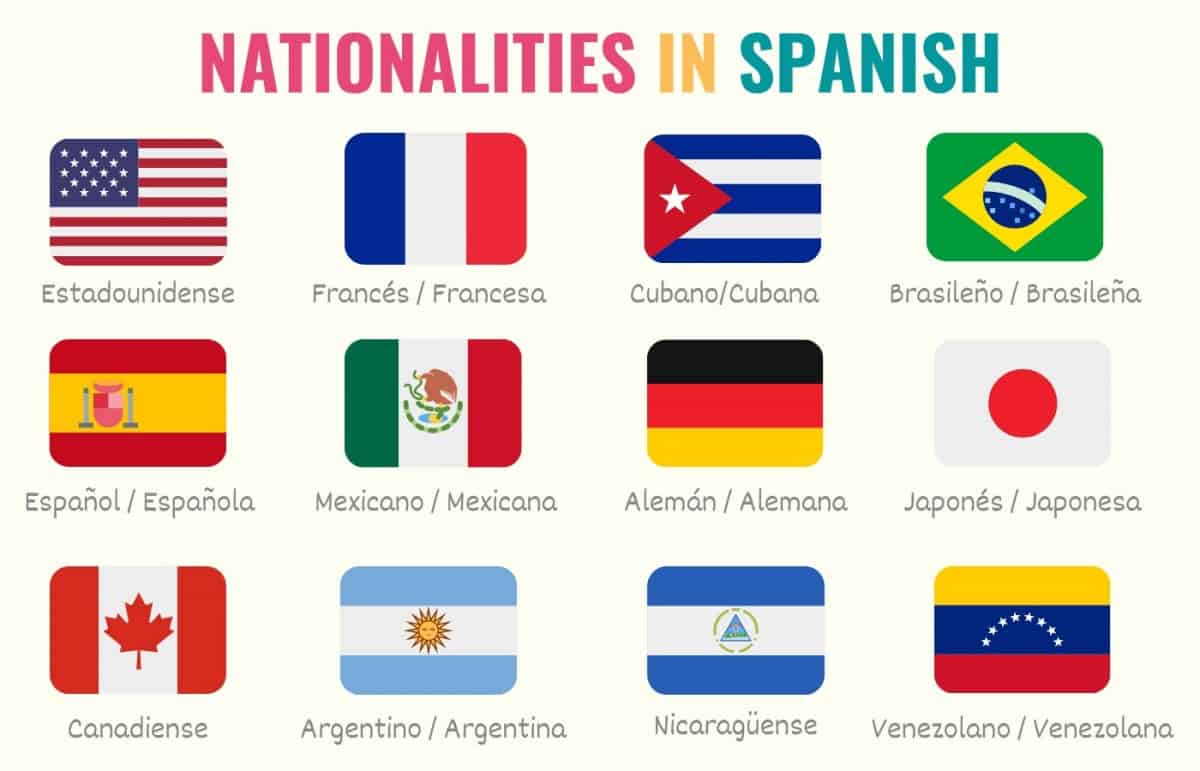 Adjectives of nationality in Spanish are an important topic that you’ll learn as a beginner. For that reason, in this article, we’ll go over:

In addition to vocabulary and rules, you’ll also learn different ways to ask people about their nationality. Let’s start!

What Are Adjectives of Nationality in Spanish?

Adjectives of nationality are words that indicate what country something or someone is from. Since they describe a permanent characteristic, these adjectives are accompanied by the verb ‘ser’. Like any other Spanish adjective, they need to match the gender and number of the noun.

Forming adjectives of nationality in Spanish is very similar to conjugating verbs. So, let’s put it in simple words. The country’s name is your base (stem), and you simply need to add some adjective endings to it. These endings include:

Even though the country’s name is your base, in some cases, you may need to delete some letters from it before adding the ending. just like conjugations

For example, some masculine nationalities will not specify the gender with an ‘o’, but with a consonant (check the previous example with japonés). With some adjectives of nationality, you don’t need to mark the gender because they’re neutral. This means they can be applied to both masculine and feminine nouns regardless of their ending.

Finally, you’ll need to add an ‘s’ or ‘es’ to pluralize adjectives of nationality. If the nationality ends in a consonant or a vowel with an accent, you will need to add the syllable ‘es’ to make it plural. For example:

Examples of Nationalities in Spanish

Here’s a list of some nationalities to help you expand your vocabulary and understand a little bit better how to identify masculine, feminine, and neutral adjectives of nationality.

Adjectives of nationality that end with ‘o’ or ‘a’

Masculine adjectives of nationality that end with a consonant:

Take Note: Notice that with adjectives of nationality that end with a consonant, you simply need to add an ‘a’ to make their feminine versions.

¿Eres británico? Pensé que eras australiano.
Are you British? I thought you were Australian.

Just like in English, in Spanish, you can use nationalities to describe food or explain where something is from:

¿Te gusta la comida japonesa?
Do you like Japanese food?

Take Note: In Spanish, people from the United States are estadounidenses. So, we don’t use americanos to refer to this nationality.

Do you capitalize nationalities?

Unlike in English, we don’t capitalize nationalities in Spanish unless they are part of a proper noun or start a sentence. However, the names of countries are always capitalized.

Nací en España, pero mi familia es china.
I was born in Spain, but my family is Chinese.

How to Ask Someone Their Nationality in Spanish

You’ll probably meet people from other countries along your journey of learning Spanish. Knowing how to ask someone their nationality can be very useful when meeting people from different parts of the world.

Here are some phrases you can use to ask someone’s nationality:

Take Note: These questions can be adapted by changing the conjugation of ‘ser’ and the possessive adjectives to make them formal and appropriate. We do this when talking to older people or figures of authority.

Okay, I know that this seems like a lot of information, especially with all of the exceptions you need to keep in mind, but practice makes perfect.

Trust me, learning to use adjectives of nationality in Spanish will make a huge difference in many areas. It will help you understand the news or any conversation involving a global landscape. Of course, it will help you interact with people from all around. ¡Buena suerte!