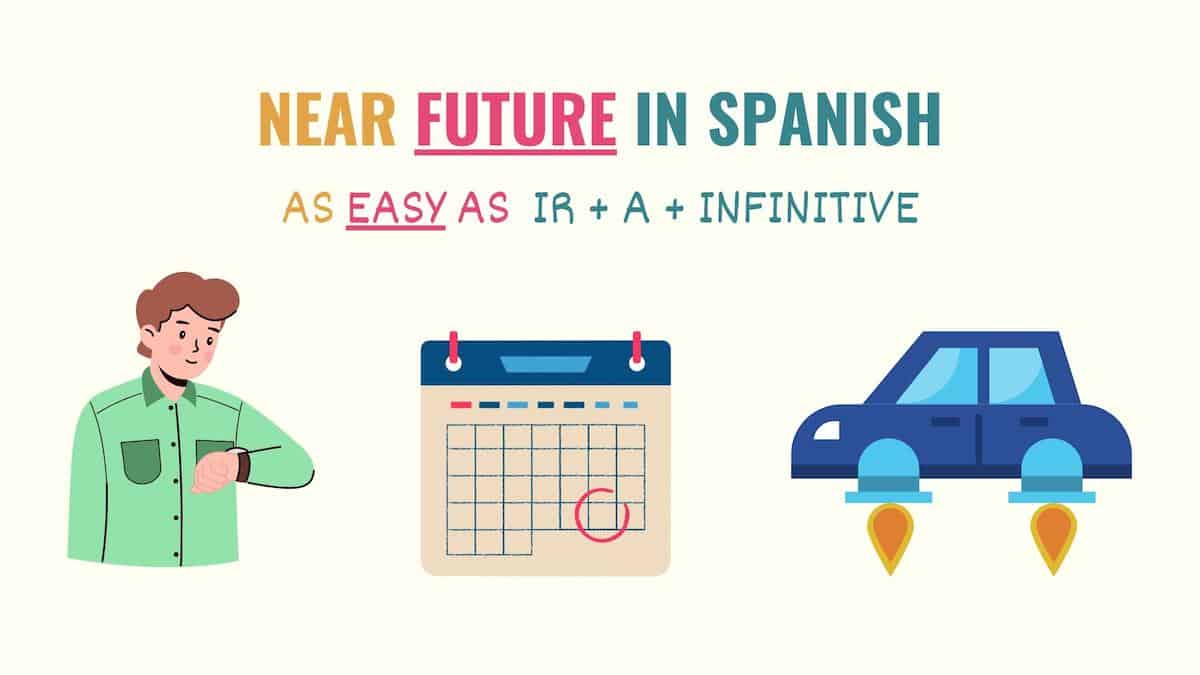 If you’re learning Spanish, ir + a + infinitive is one of the most common verb structures you’ll use. After all, it’s the formula for the near future in Spanish. Since this is a key tense, you’ll learn how to conjugate and use the near future in this guide.

Here is an overview of the things you’ll learn:

I’ll also include examples, so you can learn how to form sentences with ir + a + infinitive. Let’s get to it!

How to Conjugate the Near Future in Spanish

Here is a quick summary of ‘ir’ in the present tense.

Once you’ve conjugated ‘ir’, you’ll fill in the rest of the formula:

Mañana voy a ir al cine.
Tomorrow, I am going to go to the movies.

¿Qué vas a hacer este fin de semana?
What are you going to do this weekend?

Unlike other Spanish tenses, the near future does not have endings. Instead, you must use the present form of ‘ir’.

Take Note: The formula ir + a + infinitive means ‘going to’ in English. As you can see, the infinitive verb is key to conjugating the near future in both languages because it expresses the action someone is going to perform. Without it, the information would be incomplete.

Order of object and reflexive pronouns

In many cases, a sentence in Spanish near future may require an object or reflexive pronoun. These elements are added to the ir + a + infinitive formula. When doing so, you have two options:

#1 Place them before the conjugated verb (ir)

Me voy a bañar.
I am going to shower.

Le vamos a regalar un boleto.
We are going to give her a ticket.

#2 Attach them to the infinitive verb

Voy a bañarme.
I am going to shower.

Vamos a regalarle un boleto.
We are going to give her a ticket.

The meaning of the sentences are exactly the same whether you use option 1 or 2.

How & When to Use the Near Future in Spanish

Now that you know how to form the near future, let’s see how and when you’re going to use it.

Current plans or intentions about the future

Creo que voy a querer más pastel.
I think I am going to want more cake.

Mis amigos van a venir a visitarme este año.
My friends are going to come to visit me this year.

Si te mojas, te vas a enfermar.
If you get wet, you are going to get sick.

¡Mira qué nublado está! Seguro va a llover.
Look how cloudy it is! It is going to rain for sure.

Actions or events that will take place in the near future

La película va a empezar a las cinco.
The movie is going to start at five.

Tú vas a saber conjugar el futuro próximo.
You are going to know how to conjugate the near future.

Take Note: Notice that the time markers for the near future describe a time close to the present. For that reason, it’s common to use time markers such as este año (this year), a las cinco (at five), el año que viene (next year), el lunes (on Monday), etc.

Near Future vs Simple Future in Spanish

The near and simple future are used to talk about the future in Spanish. However, the difference between these tenses is the nuance and temporary distance you want to express.

The near future describes actions that will take place very soon in the future.

Mañana voy a ir al dentista.
Tomorrow I am going to the dentist.

On the other hand, the simple future refers to actions that will happen at some point in the future. We use it to discuss plans and make hypotheses about the future.

En unos meses iré al dentista.
I will go to the dentist in a few months.

Because it’s so close to the present, the near future implies certainty, whereas the simple future is not as concrete because it doesn’t refer to upcoming actions. Check the second example. There is so much time between now and then that things can change. Although it’s a future plan, we’re not sure if I’ll actually go.

Tip: In conversational Spanish, the near future is seen as an informal version of the future.  However, as you’ve learned, these tenses have a minor nuance.

When talking about the future, you’re more likely to use the near future in Spanish. So, here are some key points you should remember:

Take our summarized notes and graphics on the near future in Spanish with you to study later!