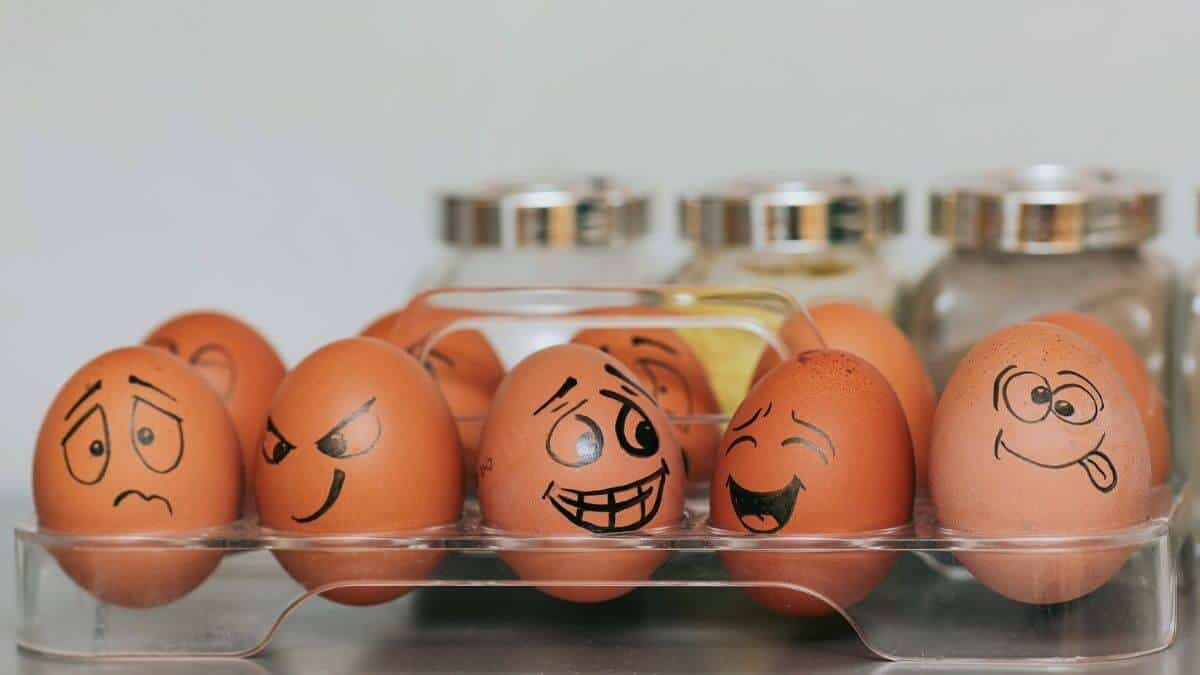 Even though each Spanish speaking country has its own slang words, there will be cases where we all share the same informal words or expressions. This is the case of ahuevo in Spanish. However, keep in mind that, depending on both the country and the context, ‘ahuevo’ can have different meanings and uses.

So what does ahuevo mean? ‘Ahuevo’ is an informal expression whose meanings and uses vary depending on the country and the context. These are the closest ways to translate it into English:

As you can see, ‘ahuevo’ can be used in a wide range of situations. Since this word is applied in different ways, in this article, we’ll talk more in-depth about the meanings and uses of ‘ahuevo’ in Spanish. We’ll also provide you with common examples that you can use in real situations. By the end of this, you will be able to use this slang Spanish expression properly.

A huevo in Spanish – Meanings & Uses

We mentioned earlier, that ‘ahuevo’ has multiple meanings and uses in Spanish. Something that you need to keep in mind when using this expression is that in countries like Mexico, Honduras, El Salvador and Nicaragua it’s a very informal phrase. This means that you can only use it in casual conversation. In fact, in Mexico, young people use this phrase among their friends and they try to avoid it when talking to grown-ups.

It’s very likely that when you start applying this word, you may find that people write or pronounce it as two separate words. Although the correct way to write this phrase is as two separate words, the truth is that since it’s an informal expression people don’t care too much about the spelling. But to avoid future misunderstandings, you should be aware of this option in its flexible spelling:

Additionally, ‘ahuevo’ or ‘a huevo’ is a slang expression with multiple meanings. Therefore, you won’t be able to translate it directly into English the whole time. In order to help you understand this informal Spanish phrase, we prepared a list with its different meanings and uses.

1. To express that something is mandatory

One of the most common ways to use ‘ahuevo’ is to express that you or someone must perform a certain activity by obligation or because you were forced to do it. In this case, there’s no direct translation for ‘ahuevo’. However, you can use expressions as ‘mandatory’, ‘against someone’s will’, ‘whether you want it or not’ or ‘forcibly’.

As mentioned before, this slang expression is only used in very casual contexts. Here are some examples as well as the phrase structure we use:

[Verb conjugated] + ‘a huevo or ahuevo’

Me comí ese postre a huevo, la neta estaba muy malo
I ate that dessert against my will, to be honest, it was pretty bad

In some Spanish speaking countries, it’s also very common to use ‘ahuevo’ as an informal way to say ‘yes’. In this context, this expression could be translated as ‘heck, yeah’, ‘of course’ or ‘yes’.

In this situation, ‘a huevo’ can be used either to respond to someone’s questions or to build affirmative statements. Here are some example conversations:

As mentioned before, ‘ahuevo’ can also be used to build affirmative sentences. In this case, you will be emphasizing the fact that you will do certain things.

¡A huevo que quiero ir a México! ¿Cuándo nos vamos?
Of course I want to go to Mexico, when are we leaving?

¿Eso te dijo? ¡Está loca! ahuevo que tiene tus cosas
Did she tell you that? She’s insane! Of course she has your things

When using this structure, keep in mind that the presence of ‘que’ will help you emphasize your information.

3. To express that something is very cheap

Another meaning of ‘ahuevo’ is to express that the price of an object or product is very low. Therefore, in this situation, ‘a huevo’ is close in meaning to the expression ‘for almost nothing’. Keep in mind that even though this use may be very common in some Spanish speaking countries, you won’t be able to apply it in other places.

Creo que es mejor que te esperes, en unos días lo consigues a huevo
I think it’s better if you wait, in a few days you’ll get it for almost nothing

4. As an expression to celebrate or show happiness

In Mexico, another way to use ‘a huevo’ is as an expression of celebration. In this context, this phrase allows us to celebrate or express our happiness because an event that we’re waiting for took place. Although there’s no direct translation for this use of ‘ahuevo’, the closest expression would be ‘heck, yes’ or ‘heck, yeah’.

¡A huevo! Me dieron el trabajo
Heck, yes! I got the job

Since ‘ahuevo’ can be translated as ‘yes’, heck, yes’, or ‘of course’, Spanish speakers also use this phrase to show agreement with someone’s statement. On top of being translated as ‘of course’ or ‘yes’, in this context, ‘obviously’ would be another word close in meaning.

‘Ahuevo’ works as our response to someone’s sentence. Here are some examples that could help you understand this meaning a little bit better.

In Costa Rica and Uruguay, this slang expression is used to describe that someone got their results with a lot of effort or sacrifice. Even though this meaning is very popular in these countries, keep in mind that in other Spanish speaking regions this wouldn’t make sense. In this context, ‘a huevo’ would be translated as ‘with effort’ or ‘with sacrifice’. Here are some examples:

El partido estuvo difícil, ganamos ahuevo
The game was though, we won with a lot of effort

Just like other meanings and uses of ‘a huevo’ in Spanish, keep in mind that, in this case, you should only use this expression in informal conversations.

7. As a synonym of ‘handed on a silver platter’

‘A huevo’ is more common in Latin American countries. However, there are some instances where you can also use it in Spain. In Spain, this phrase is used to express that something is too easy. When using this meaning keep in mind that:

Depending on the context, this phrase could be translated as ‘handed on a silver platter’ or ‘make things easier for you’. Here is the phrase structure you need to use as well as some examples:

Claro que ganaron, les pusimos el juego a huevo
Of course they won, we handed them the game on a silver platter

Martín dejó su celular en la mesa, se lo puso a huevo a la persona que se lo robó
Martin left his phone on the table, he made it easier for the person who stole it

‘Ahuevo’ or ‘a huevo’ is a slang term whose meanings and uses will vary depending on the country and the context. At the beginning of this post, we mentioned the translations of this word and, later, we talked about each one of its meanings more in-depth.

Here are the most common meanings of this word:

We also discussed which countries you can use this expression for the respective meanings. No matter where you are, you always need to keep in mind that ‘ahuevo’ is very informal. Therefore, you want to use it in the correct context and with the correct group of people.

Hopefully, now you have a better understanding of what does ahuevo mean in Spanish and you’re ready to start applying it into your conversations.

What does ahuevo compa mean? Ahuevo is a slang expression that Mexican speakers use as a way to say ‘yes’ or ‘of course’. Compa is also an informal Mexican word that can mean ‘friend’, ‘pal’ or ‘buddy’. Therefore, ‘ahuevo compa’ could be translated as ‘of course, buddy’ or ‘yes, buddy’.

In Mexican Spanish, ‘compa’ is a very common word that people use in casual conversations. That’s why in this article I’ll talk in-depth about the different uses and meanings of compa in Spanish.

What does ahuevo que sí mean? Depending on the context, in Spanish, ‘ahuevo’ could mean ‘yes’. As a result, the expression ‘a huevo que sí’ is just a way to emphasize a positive answer. Although there’s no direct translation for this phrase, ‘ahuevo que sí’ could mean ‘heck, yeah’, ‘of course’ and ‘yes’.

¡A huevo que sí! Las próximas vacaciones vamos a España
Heck, yeah! Next holidays we will go to Spain

What does orale pues mean in slang? ‘Orale’ is an informal Mexican word that can be used to show agreement with a situation or with someone’s statement. ‘Orale, pues’ is an expression that we use to emphasize that we agree with someone. Therefore, we could be translated as ‘sounds good’, ‘okay’, ‘good’ or ‘fine’.

On top of showing agreement, orale can also be used in other contexts or situations. Since this is one of the most popular slang Mexican words, I wrote an article where I help you understand what does orale mean in Spanish.