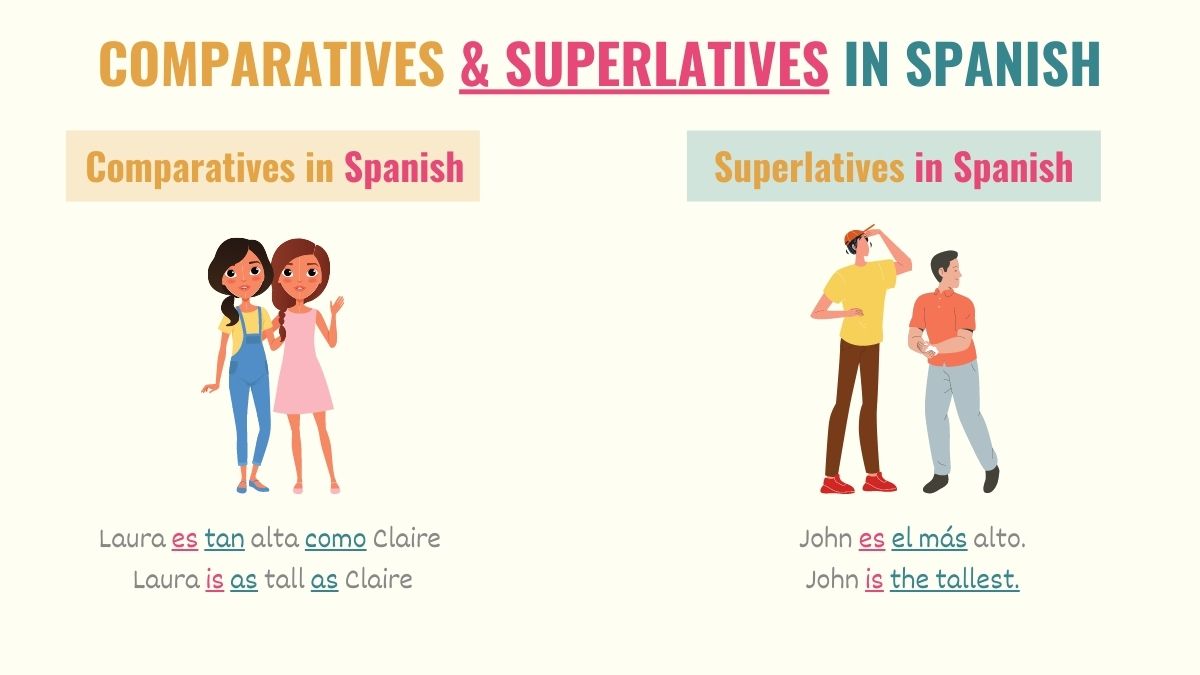 One of the most common ways to describe someone or something in Spanish is to compare it against something similar. If you think about it, people compare things against each other on a daily basis. As a result, you should take the time to master Spanish superlatives and comparatives.

Comparisons and superlative adjectives are an important part of learning Spanish. For that reason, in this guide, you’ll find essential information about what these structures are, when to use them and how to form them. Here is a quick overview of the topics we’ll cover:

You’ll know how and when to use both comparatives and superlatives structures in Spanish by the end of it.

What Are Spanish Comparatives and When to Use Them?

Comparatives in Spanish are structures that allow people to compare and contrast someone or something’s characteristics against others. In other words, comparatives express how similar or different these things are from each other.

Mi perro es tan lindo como el tuyo.
My dog is as cute as yours.

If you check these previous examples, you’ll notice that we’re comparing and contrasting characteristics that the two subjects share. In example #1, the characteristic is “cute”, and we’ve determined that both dogs are equally cute. However, if you compare Ruth against Ben, you’ll realize that they don’t share the same height.

As you can see from these examples, comparatives in Spanish are classified into:

Many new learners think that Spanish comparatives are only limited to describing objects and people. However, you can also make comparisons between actions and amounts. Check these examples:

To build regular comparatives in Spanish, you must always use certain elements. The formulas you need to form comparatives will vary depending on whether you’re making a comparison of equality or inequality.

Comparisons of equality in Spanish

As mentioned before, you use comparisons of equality when you’re expressing that two subjects have the same characteristics or perform an action in the same way. To form this type of Spanish comparative, you should use one of the following comparative structures:

Both of these structures can be translated as “equally” or “as [adjective/adverb] as”. As a rule of thumb, every time that you’re comparing people or things (or nouns for grammar freaks), you must use the Spanish verb ‘ser’.

Here are some examples of how to build comparatives sentences in Spanish:

Clive no es tan inteligente como ustedes.
Clive is not as intelligent as you guys.

Tus flores son tan bonitas como las mías.
Your flowers are as pretty as mine.

Tu carro es igual de rápido que el mío.
Your car is as fast as mine.

Take Note: Tan always precedes an adjective or adverbs. However, this word will change to tanto if a noun immediately follows it. This type of structure compares the quantity of a noun against another. ‘Tanto’ agrees in gender and number with the noun.

Tengo tanto dinero como tú.
I have as much money as you.

On the other hand, if you want to compare how two people perform an action, you’ll change ‘ser’ for any verb you need. Aside from this, the structure remains the same:

If you want to take your Spanish to the next level, there is also another structure that you can use when comparing actions. In this case, you won’t need to use adjectives or adverbs because the comparison is only focused on the activity being done rather than how it was performed.

Tu hermano no come tanto como el mío.
Your brother doesn’t eat as much as mine.

Te quiero tanto como tú a mí.
I love you as much as you love me.

The formulas to build comparatives of inequality in Spanish are:

These structures are translated as more than and less than, respectively. As you already know, you can use comparatives in Spanish to contrast people, things, and activities. Let’s start with some simple examples:

If you pay attention to these examples, you’ll notice that they express that one of the subjects has a higher or lower degree of the characteristic described. For instance, in example #1 that attribute is intelligence, and we know that Lucía had a higher level of that attribute than Paco.

Take Note: Depending on the adjective you use, the English translation for comparatives of inequality could be translated as more than, or you’ll simply add the ‘er’ ending to the adjective.

Remember that if you’re describing activities, you’ll need to use verbs other than ‘ser’. Additionally, in some cases, the adverb might not be necessary since you may not want to provide extra information on how the action was performed.

When it comes to inequality comparatives, some adjectives cannot follow the same pattern we’ve learned so far. These are irregular comparatives that you need to memorize. Luckily, there are just 4 of them, and you’ll only use them when building structures with ‘más que’.

The four irregular comparative forms in Spanish are:

Take Note: Even though it’s grammatically incorrect, Spanish speakers use the adjectives grande and pequeño with the structure ‘más qué’ in informal conversations.

In simple words, you use superlatives in Spanish to:

Antonio es el más guapo del salón.
Antonio is the most handsome in the room.

Compare example #2 against instance #3. In example #2, Antonio is being compared to the other men inside of that room, and he turns out to be the most handsome one. However, in example #3, the new guy is not being compared to anyone. We’re just emphasizing the fact that he’s very cool.

Based on this information, there are two types of superlatives in Spanish.

Examples #1 and 3 is an illustration of absolute superlatives in Spanish. This means that the superlativo absoluto doesn’t rely on a comparison. On the other hand, relative superlatives are a comparison to determine what subject has the most outstanding characteristics of that group.

How to form superlatives in Spanish?

Like comparatives, Spanish superlatives use different formulas depending on the message you want to convey. Below are the structures that you need to know for each case:

The most common way to form this type of superlative is to change the adjective or adverb by adding the ending ‘-ísimo’ or its feminine form ‘-ísima’. Let’s see some examples:

Espérame, caminas rapidísimo.
Wait for me, you walk extremely fast.

Take Note: When adding the ‘-ísimo’ ending to an adjective or adverb, there are certain spelling rules that you need to keep in mind. For example, adjectives ending in ‘-co’, ‘-ca’, ‘-ga’ or ‘-go’ change to ‘-qu’ and ‘-gu’, respectively.

Unlike absolute superlatives in Spanish, relative superlatives actually rely on a comparison. The purpose of this structure is to express that a person or thing inside a group has the most or least outstanding characteristics of all.

To put it another way, this type of superlative locates the subject either at the bottom or at the top of a group based on a determined quality. In this case, the formulas we use are:

Something to notice is that Spanish superlatives are always built with the verb ‘ser’. You also need to make sure that the adjectives and Spanish definite articles agree in number and gender with the noun. Here are some examples:

In some cases, you might need to mention the group that you’re using for your comparison to make your sentence clearer. Here is how you do this:

Eres la más divertida de toda la familia.
You are the funniest in the whole family.

Take Note: Notice that, depending on the adjective you use, Spanish superlatives can either be translated as: the most, the least or you’ll simply add the ‘-est’ ending to the adjective you’re working with (e.g. fastest, slowest, etc.).

Below, you’ll find a table with the irregular superlatives in Spanish:

Ustedes son los mejores amigos que pueda tener.
You are the best friends that I can have.

Estos celulares son los peores del mercado.
These phones are the worst on the market.

Take Note: Although it’s not grammatically correct, many Spanish speakers use ‘grande’, ‘joven’ and ‘pequeño’ with el más or la más structure.

Spanish superlatives and comparatives are essential structures that can help you describe people and objects more precisely. As a result, these types of sentences are extremely common in your daily conversations.

Here are some key points that you should keep in mind when working with these structures: