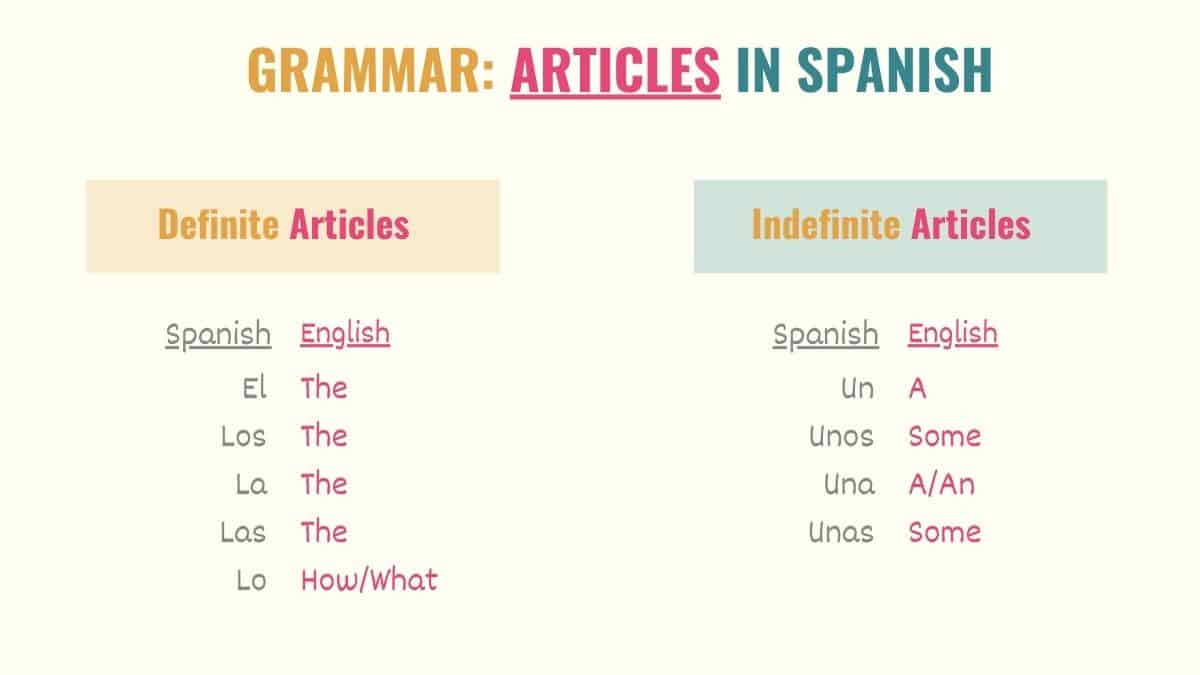 According to the Royal Spanish Academy’s most recent corpus, the articles la and el are the second and the fourth most used words in Spanish, respectively. So, if you ever wonder if articles in Spanish are important, the answer is without a doubt, yes!

Articles are key to forming cohesive sentences in Spanish. So, if you’re looking to learn more about this essential topic, in this guide, you’ll find all the crucial information you need to understand and adequately use Spanish articles.

Here is a quick overview of the topics covered in this guide:

By the end of it, you’ll feel more confident about articles in Spanish.

What Are Articles in Spanish?

Articles are small words that are classified as determiners. In simple terms, this means that Spanish articles are words that you place before a noun to provide certain details about the thing or person you’re talking about. When using Spanish articles, you convey the following information:

If you compare example #1 vs. #2, you’ll realize that they’re talking about masculine nouns. However, #1 refers to a single phone, while #2 talks about multiple phones.

Additionally, by using el, the first example implies that the people involved in the conversation already know which phone I’m talking about. This doesn’t happen in the second example, where people don’t know anything about the types of phones I got.

Based on their degree of specificity, articles in Spanish are classified into:

In the sections below, we’ll explore these types of articles in more detail.

As their name suggests, definite articles in Spanish work with a defined noun. This means that the people engaging in the conversation with you already know or have heard about the noun you’re talking about.

When to use definite articles

Identifying when you’re talking about something specific can be challenging as a new Spanish learner. So, if you still feel unsure about when to use definite articles in Spanish, here is a list of situations where you need to use these words:

Take Note: When the prepositions a or de come immediately before the article ‘el’, you need to contract both words (check the graphic below) to avoid awkward pronunciation.

Examples of how to use definite articles in Spanish

Below are some examples of how to use definite articles in Spanish. Let’s see if you can identify all of the contexts listed above, shall we? Remember that these words need to agree in gender and number with the noun.

No me gustó el pastel.
I didn’t like the cake.

Tengo clase los lunes.
I have classes on Mondays.

Tip: While we don’t do this in English, we always a masculine article (‘el’ or ‘los’) to refer to the days of the week in Spanish.

Creo que son las cinco.
I believe it is five.

Tip: In English, you don’t use articles with the same frequency as we do in Spanish. As a result, there will be many situations that may seem weird to you. For example, body parts always work with definite articles because they’re something unique and specific.

¿Sabe a qué hora llega la doctora?
What time does the doctor arrive?

Tip: In this example, we know that the doctor is female. If the doctor was male, we would use ‘el doctor’.

Tip: In Spanish, there are many places (such as countries, rivers, cities, mountains, lakes, etc.) whose name is formed with a definite article. Some examples include:

Advanced Tip: Spanish speakers use definite articles to express possession as well. This meaning is only available when it’s more than clear that the object belongs to the speaker. In this case, you can use articles instead of possessive adjectives.

As a result, you could say:

Me robaron el celular y la cartera.
Somebody stole my phone and my wallet.

As you progress in your Spanish grammar, sooner or later, you’ll have to use the infamous neuter article lo. Jokes aside, many students assume that ‘lo’ is a masculine article. However, as a neuter article, ‘lo’ does not convey the gender of a noun.

Unlike other Spanish definite articles, ‘lo’ only has this form and it doesn’t work with nouns because Spanish nouns always have a gender. As a result, the neuter article ‘lo’ is used to:

When working as a neuter article, lo can be translated as ‘how’ or ‘what’. Keep in mind that we use the conjunction que to introduce ideas, wishes or thoughts.

Lo que quiero es descansar.
What I want is to rest.

Ojalá pudieras ver lo bonita que está la ciudad.
I wish you were able to see how pretty the city is.

Take Note: Some people also use the neuter article ‘lo’ to refer to a person’s house or commercial business. While this application is not as common as it used to be, you may find it in books or in small towns.

Spanish indefinite articles refer to imprecise and undefined people or things. This means that the listener or reader is not yet aware of the noun (object) you’re referring to, or he doesn’t have enough information to identify it.

When to use indefinite articles

Here are some examples of how to use these articles:

Te compré un suéter.
I bought you a sweater.

Jonathan, ¿quieres una manzana?
Jonathan, do you want an apple?

Hay unos niños en la puerta.
There are some kids at the door.

As you can see in examples #1 and #5, we don’t have much information about the nouns. We don’t know who those kids are or what type of sweater I bought you. On the other hand, examples #2 and #3 express the quantity of ice cream and apples the person wants. Finally, the fourth example emphasizes Tatiana’s characteristics.

As you have learned so far, definite and indefinite articles in Spanish aren’t the same. The key difference between these sets of words is their degree of specificity. To put it in simple terms:

Observe the sentences above. When using definite articles, I’m talking about something specific that the listeners can quickly identify. In this example, that would be the chocolate cake, and it’s implied that the person selling cakes knows what cake I’m talking about.

However, if I use the indefinite article, aside from the quantity, I’m not giving much information about what I want. So, the clerk and I would need to have a conversation to define the type of cake I’m looking for.

We’ve already established that Spanish nouns always have a gender and that you have to choose the article that agrees with the object’s gender. However, when it comes to Spanish articles, there’s an exception to this rule that you should know.

When a feminine singular noun begins with a stressed ‘a’ sound, you will have to use a singular masculine article to ease the pronunciation.

Want to check it for yourself? Try to read the sentences below. Did you notice how smooth the pronunciation is with the correct examples?

This rule doesn’t apply if:

When to Omit Articles in Spanish?

Although they are a common element in a sentence, articles in Spanish have to be omitted in certain situations. The following cases do not require the use of articles:

Tip: Even though in English you use articles to refer to a person’s profession, in Spanish we don’t have this application. However, you will need to add an indefinite article if you’re describing how people are in their professional life.

Tp: As you already know, there are certain rivers, mountains, cities, and countries whose names in Spanish are formed with a definite article. In this case, you cannot omit the article because it’s part of that proper noun.

¿Todavía tenemos un vino?
Do we still have a wine?

¿Todavía tenemos vino?
Do we still have wine?

Tip: Articles and uncountable nouns in Spanish can be confusing. In this case, you only need to use articles if the object you’re referring to is very specific. Check the examples below.

¿Dónde está la leche que compré?
Where is the milk that I bought?

¿Todavía tenemos el vino que nos dio Gus?
Do we still have the Italian wine that Gus gave us?

Spanish articles can be challenging. To help you overcome this, here are some key points that you should never forget: