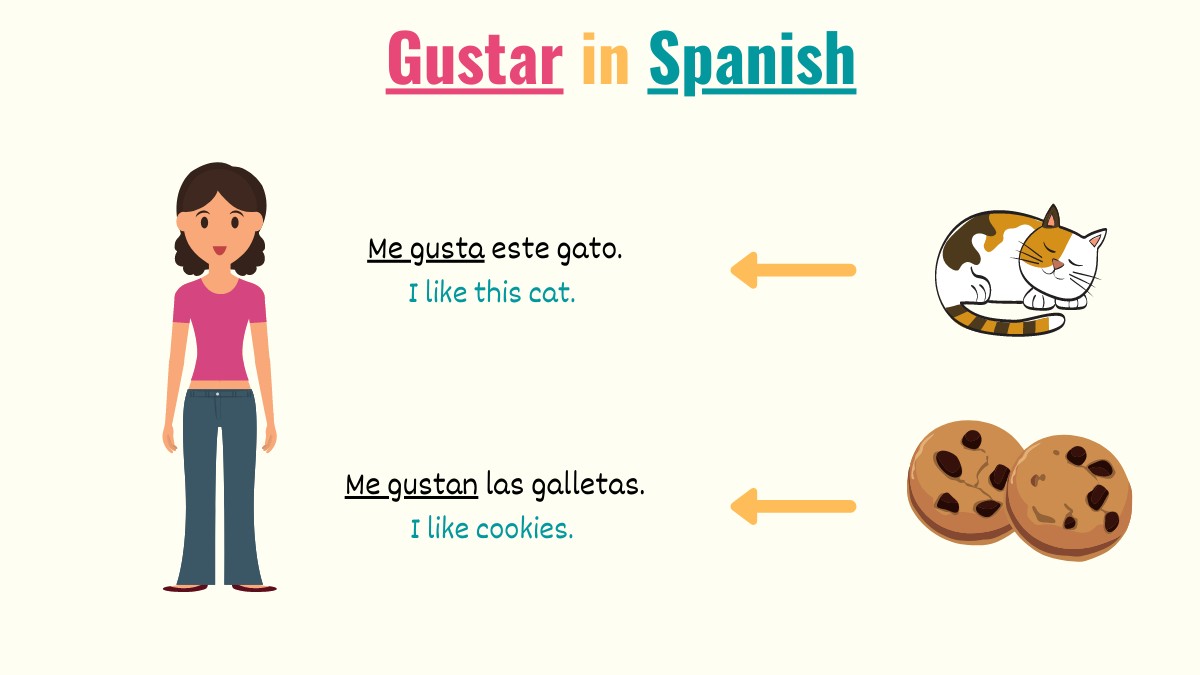 In this short guide, we will cover the following topics for ‘gustar’ in Spanish:

What does ‘Gustar’ mean?

In Spanish, ‘gustar’ is used to express a positive reaction towards something or someone. This verb is usually translated as ‘to like’. However, depending on the context where is being used,  gustar can be different meanings:

‘Gustar’ is a regular verb. This means that the stem that you’ll use to conjugate to every tense will be ‘gust’. Keep in mind that, since they work with the verb in its infinitive form, this is not applied to the future and the conditional tenses.

¿Te está gustando la película?
Are you liking the movie?

A Betty no le está gustando la comida.
Betty is not liking the food.

Nunca me ha gustado discutir.
I have never liked arguing.

Si me hubiera gustado el ambiente, me habría quedado más tiempo.
If I had liked the atmosphere, I would have stayed longer.

Take Note: In Spanish, it’s not common to give commands with ‘gustar’. As a result, this verb is almost never conjugated in its imperative form. This is because it’s difficult to order a person to like something.

How Does ‘Gustar’ Work in Spanish

Many students struggle with ‘gustar’ since it doesn’t seem to follow the same conjugation rules as other verbs. This is because, as established before, when talking about likes and dislikes this verb always works with an indirect object and is conjugated based on it rather than the subject that performs the action.

Here’s an example comparing how verbs are usually conjugated, and how to conjugate a verb like ‘gustar’:

Yo no como manzanas.
I don’t eat apples.

A mí no me gustan las manzanas.
I don’t like apples.

As confusing as that may sound, the good news is that, with most of its meanings, gustar can only be conjugated in the third person singular or plural (‘gusta’ or ‘gustan’). To determine the conjugation of ‘gustar’, you need to look at the object (the thing or activity that someone likes).

Here are some key points to determine how to conjugate ‘gustar’ in Spanish:

To conjugate ‘gustar’ in Spanish, there are some key elements that you need:

Me gustan mucho las fresas.
I like strawberries very much.

A Leo y a mí nos gusta mucho viajar.
Leo and I like to travel a lot.

Now that you get a grasp on the theory, let’s see when you can use this verb in Spanish and how to in each context.

When to Use ‘Gustar’ in Spanish with Examples

As you already know, ‘gustar’ is used to talk about your likes and dislikes. But since depending on the context the meaning of this verb can change, it’s important that you understand its different connotations because using it in the wrong situation can affect what you wanted to say.

The three most common ways to use ‘gustar’ are:

In the sections below, I’ll include some examples of how to use ‘gustar’ in Spanish and phrase structure you can use to start creating your own sentences.

Talking about likes and dislikes

In Spanish, ‘gustar’ is used to describe things that please someone. So, it can be applied to talk about activities, objects and animals that you like. In this context, it can be translated as ‘to like’ or ‘to enjoy’.

As established before, gustar’s conjugations depend on the object of the sentence (the thing you like). Also, remember that ‘gustar’ can be conjugated in any tense that you need. Below, there is a phrase structure that you need to follow when talking about activities that you like or don’t like to do.

No me gusta bailar.
I don’t like to dance.

Nos gusta ir a la playa.
We like going to the beach.

La verdad, me gustaría tener muchos perros.
To be honest, I would like to have many dogs.

If instead of an activity, you want to talk about a thing that you like. You can follow the next formula to build singular sentences with gustar.

¿Te gusta la música clásica?
Do you like classical music?

No me gustó el libro.
I didn’t like the book.

Finally, if you want to talk about multiple things that you like, you’ll need to use ‘gustar’ in plural sentences. Here is the formula that you’ll use in this case.

A mí no me gustan las arañas.
I don’t like spiders.

Nena, ¿a ti te gustaban las muñecas?
Girl, did you used to like dolls?

Claudia me dijo que le gustaron las galletas.
Claudia told me that she liked the cookies.

Take Note: With ‘gustar’, we use something called personal ‘a’. In other words, we use ‘a mí’ (and other pronouns) before the indirect pronoun as a way to emphasize or, if there’s not enough context, introduce who likes that thing that you’re talking about.

Unlike English, in Spanish, when using the verb gustar to talk about someone, you’re actually expressing that you’re attracted to that person. Now, if you actually find that person attractive, it wouldn’t be a big deal if you say me gustas. But if this is not the case…well, things can get awkward very quickly.

When using ‘gustar’ to talk about attraction, many students get confused because they notice some small changes in the conjugations. I promise you, this is not as bad as it sounds. In fact, let’s go check how to build this meaning.

As mentioned before, ‘gustar’ is conjugated based on the thing that we like. With objects and activities, we use plural and singular nouns, as a result, our conjugations are limited to the third person singular or plural.

When liking someone, this principle doesn’t change: your conjugation is still based on that person, but it’s no longer limited to the third person singular or plural. This means that the conjugation matches the person that is liked by someone else.

So, if you were wondering why I didn’t include the second person (gustas) in the conjugation tables above, it’s because this is the one exception to the rule. Check these examples below:

Creo que le gusto (yo) a Fernando.
I think Fernando likes me.

La verdad es que me gustas (tú) mucho.
To be honest, I like you a lot.

Hace años, me gustabas (tú) mucho.
Years ago, I liked you a lot.

If you check examples #1 and #2, you’ll see that the people being liked are you and me. As a result, gustar is conjugated according to those people ( yo le gusto – tú me gustas). Of course, you still have to use indirect object pronouns to explain who likes someone.

To put it simply, indirect pronouns point out the person who feels the attraction and the conjugation of the verb indicates who they are attracted to. Notice that this same idea is applied to the rest of the examples. Although it seems like a big change, the truth is that this conjugation is still based on the person you like!

Take Note: In Mexico, you can use the expression ‘caer bien’ to say that you like someone in a non-romantic way (just friends). For more standard expressions, you can use ‘agradar’.

Asking people what they want

One super common use of gustar in Spanish that a lot of learners overlook is to use it as a polite way to inquire about what someone wants or needs. Although this meaning is very useful in restaurants, you can also apply it in formal situations, with people that you’re not familiar with or, simply, when you need to show good manners 😉

With this meaning, ‘gustar’ is translated as ‘would like’ or ‘to want’. Now, in this situation, ‘gustar’ always works as a question that the speaker will ask directly to the person. Since this application is slightly different from the other meanings, in this case, you won’t use indirect objects and pronouns.

Suegra, ¿gusta que le ayude?
Mom, would you like me to help you?

Disculpen, señoritas, ¿gustan que les muestre la carta de postres?
Excuse me, ladies, would you like me to show you the dessert menu?

Check the examples above. If you noticed, gustar is being conjugated like any other verb. This means that it’s conjugated based on the person that you’re asking the question to and always in the present tense.

Take Note: Although gustar is suitable for asking what people might want or need, it might be too formal to use among your family members or your friends. For more informal situations, you can use the verb querer.

These are a couple of expressions that contain the verb ‘gustar’ and can help you sound more natural in Spanish.

Gustar la mala vida indicates that someone likes or has a tendency to get into problematic situations. This expression is literally translated as ‘to like the bad life’.

Me asusta pero me gusta is the translation of ‘I like it but it scares me’.

Synonyms of ‘Gustar’ in Spanish

Agradar is another way to say ‘to like’. This can be applied to people and things, however, it’s not widely used.

Caer bien is a very common Spanish way to indicate that you like someone in a friendly context. It can be translated as ‘to like’ or ‘to get on well’.

Atraer is the direct translation of ‘to attract’. As a result, this verb is used to express someone’s attraction towards another person.

Querer can be used instead of ‘gustar’ as a slightly less polite and formal way to ask people if they need something. Querer is the direct translation of ‘to want’.

I Like You in Spanish: Me gustas vs I Me caes bien
Me gusta vs Me gustaría