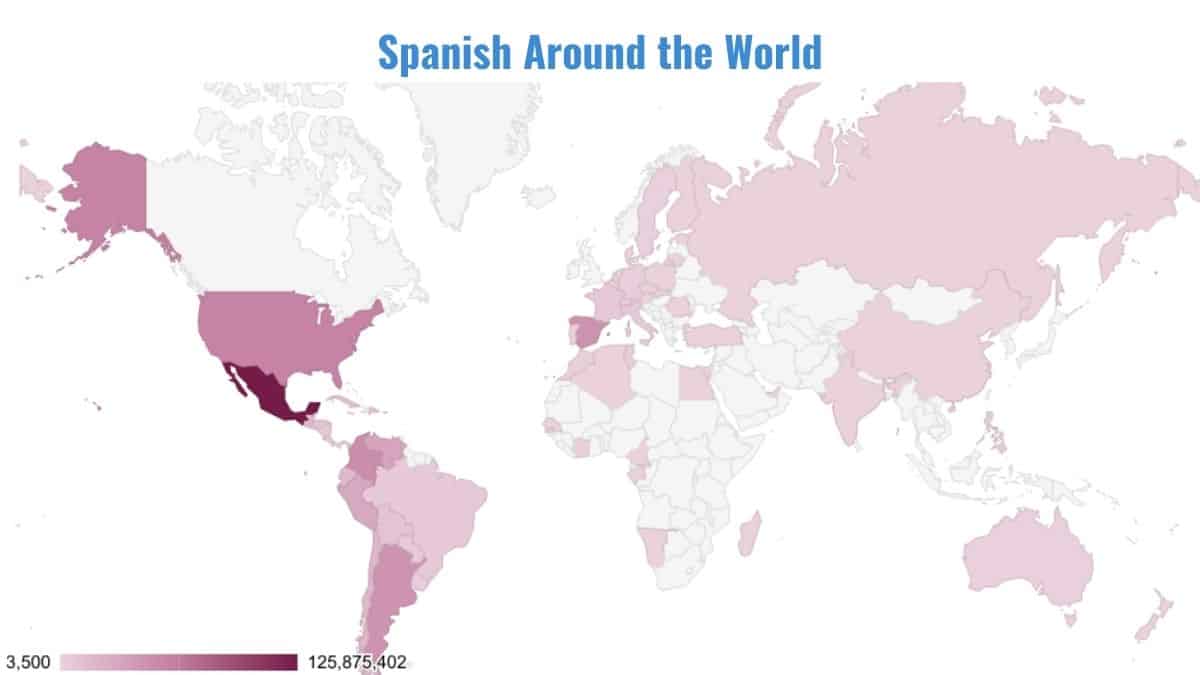 Whether you’re researching, teaching, or learning Spanish, you may be interested in learning some cool facts about the Spanish language. For this reason, I’ve compiled a list of data and statistics that will give you some interesting insights into this language.

The information you’ll find throughout this article includes:

What Are the Most Popular Languages Spoken in the World?

According to Ethnologue, the most widely spoken language in the world are:

English and Mandarin Chinese are the two most spoken languages in the world. However, when it comes to native speakers, the numbers are quite different. In order to show this, we took into account the 4 biggest languages.

Source: Ethnologue. For Spanish, we took into account the data gathered by El Instituto Cervantes

After analyzing this data, we realized that:

How Many Spanish-Speaking Countries Are There?

Where is Spanish a Second Language?

Even though most of the Spanish-speaking population is concentrated in Latin America, there are other countries that have Spanish speakers.

According to this Wiki data, here are some interesting facts about Spanish across the world:

How Many Different Types of Spanish Are There?

Determining the specific number of Spanish variations is challenging since each country will present differences in vocabulary, grammar, and pronunciation. As a result, each country has its own particular way of using Spanish. However, due to their geographical location and their similarities, we could classify them in:

Take Note: Mexican Spanish has the largest number of speakers. As a result, it may be convenient for you to learn this dialect.

What’s the Hardest Part of Spanish

We gathered the answers of over 500 people that participated in online community polls related to the challenges they face when learning Spanish. In order to make these stats clearer, we classified their responses in:

Take Note: In these surveys, a respondent may have provided more than one answer.

So when it comes to Spanish grammar topics, we found the following trends.

Biggest Challenges When Learning in Spanish

What’s the Most Difficult Accent in Spanish

In the previous table, Spanish learners mentioned that the different Spanish accents present a significant challenge for them. So we asked ourselves which of the different accents is considered the most difficult. We gathered responses from over  200 Spanish learners and native speakers, and this is what we found out:

How Many Words Are There in the Spanish Language?

One of the most difficult aspects to tackle when learning Spanish is vocabulary: Spanish learners struggle because each Spanish speaking country has its own vocabulary. Here are some stats and data points about Spanish words:

Take Note: 1) El Diccionario de la Lengua Española contains standard Spanish words and some informal words (dialects) that have been accepted. Since they try to protect the language, not all words are accepted. 2) Diccionario de Americanismos contains words used in Latin American countries. The Royal Spanish Academy does not regulate these words, but they are accepted as part of informal speech in Latin American countries.

What Are The Most Common Verbs in Spanish?

According to the study performed by Jaime Suances Torres, there are 2252 standard and common verbs in Spanish. These verbs are classified as:

Based on this data, we found that:

What Are the Most Common Words in Spanish?

Based on 68 million samples (books, magazines, newspapers, and transcriptions based on radio and tv shows), the Royal Spanish Academy created a corpus with the 10,000 most common words in Spanish.

After reviewing the data, we discovered some interesting findings regarding the usage of these words:

Conjugating verbs was one of the most challenging topics for Spanish students. As a result, we wanted to know which tenses and moods were more frequently used in this corpus. The trends show that:

The corpus registered that 5.2% of the most common verbs were used in the subjunctive form.

What are the most common pronouns used in Spanish?

Spanish speakers, teachers, and learners alike may find it interesting to know which verb conjugations are most commonly searched for online. We collected data that showed the most searched queries and phrases following the format of “[verb] conjugation” for both searches occurring monthly in the U.S. and worldwide.

We collected data that showed the most searched search phrases for “____ in spanish” for searches performed monthly in the U.S.

On top of giving you a break from grammar and vocabulary, the purpose of these Spanish facts and statistics was to show the Spanish language in numbers; whether you’re a student, a native speaker, or researching the language. Additionally, this information will help you identify the topics and elements Spanish learners and students need to pay more attention to. As you may have noticed, if you’re struggling with something in Spanish, you’re not alone 🙂