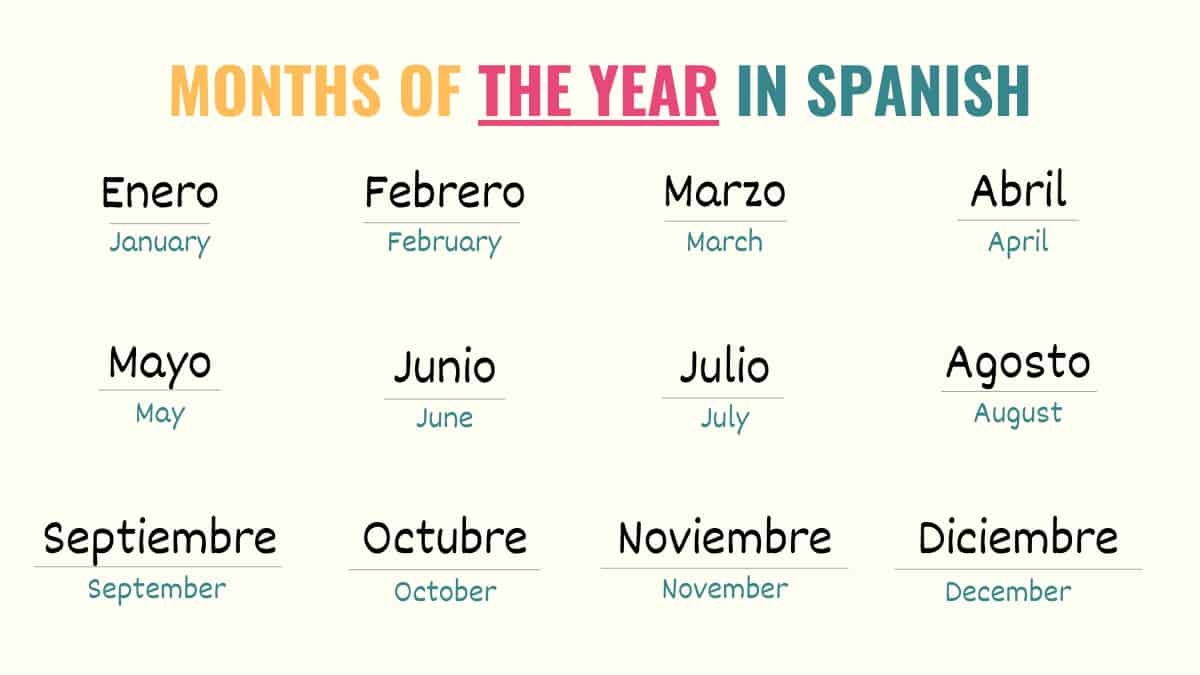 Months in Spanish is one of those things that you may not invest too much into learning, but that you definitely need to know. Given that this vocabulary is used frequently, some people wonder what are the names of the months in Spanish.

Knowing the months in Spanish allows you to talk about dates and describe periods of time. For that reason, in this short guide, I’ve answered some common questions that you may have about this topic and everything else you need to know.

Of course, I’ve included some examples so you can see for yourself a practical way to include these words into your vocabulary.

Do you capitalize months in Spanish?

Unlike English, months in Spanish are not always capitalized. In fact, these words will only be capitalized if they are used to start a sentence. If they are in the middle or at the end of a statement, months will be written in lowercase.

In Spanish, months are not considered proper nouns. So, this means that they won’t be capitalized unless they’re used to start a sentence. This usually happens when the month is the subject of a sentence or when formatting dates on papers or applications.

Mayo fue un mes muy pesado para mí.
May was a very difficult month for me.

If instead, you’re using months as complementary information for your sentence, you can use the following structure. Notice that in this case, months are in lowercase.

En abril, me voy de vacaciones a Cuba.
In April, I’ll go on vacation to Cuba.

Charlie y yo nos conocimos en enero.
Charlie and I met in January.

Gender of Months in Spanish

In Spanish, all months are masculine words. As a result, all the adjectives or articles that you use to describe them will also need to be masculine. Keep in mind that, unlike Spanish days of the week, months do not always need to be preceded by an article.

Below are some examples that will help you see the gender of months in Spanish. Notice that months can be preceded by a preposition or determiners such as articles and adjectives.

Cada diciembre vamos a visitar a mis papás.
Every December we go visit my parents.

In the previous examples, you can see that, when combined with months, the preposition de allows us to talk about specific dates.

On the other hand, en expresses the period of time when something happened or will happen. Since this is a more general period of time, it’s perfect for when you don’t remember or know the specific date of the action.

Can you abbreviate months in Spanish?

In Spanish, months can be abbreviated. The most popular way to do this is by simply using the first three letters of the month. As a result, these are the most common way to abbreviate months in Spanish:

We don’t have strong rules about how to abbreviate months in Spanish. So, even though this is the most common way to do it, don’t be surprised if you find that people abbreviate these words in a different way.

Voy a México en dic. ¿Vas a andar por ahí?
I’m going to Mexico in December. Are you going to be around?

Take Note: You can use abbreviations when texting your friends or when formatting papers.

When learning Spanish, something that might be overlooked is how to use months to talk about dates and time. In other words, if you don’t already, you should know how to use this vocabulary to express when an action did or will take place.

To do this, you’ll need to use one of the following prepositions or adjectives:

Señorita, tiene hasta mayo para entregar sus papeles.
Miss, you have until May to deliver your paperwork.

In Spanish, month is translated as mes. As you can imagine, this word can also be used to talk about the time when an action took or will take place. Notice that, in this case, you can use numbers and quantitative adjectives to measure these periods of time.

En unos cuantos meses comenzará a nevar.
In a few months, it will start snowing.

Months in Spanish is a basic and simple vocabulary that you need to know since it can be applied to your daily conversations. Since these words are quite important, in this article, we’ve learned all the months in Spanish, some rules to keep in mind, and some practical applications.

As a quick summary, keep these key points in mind: