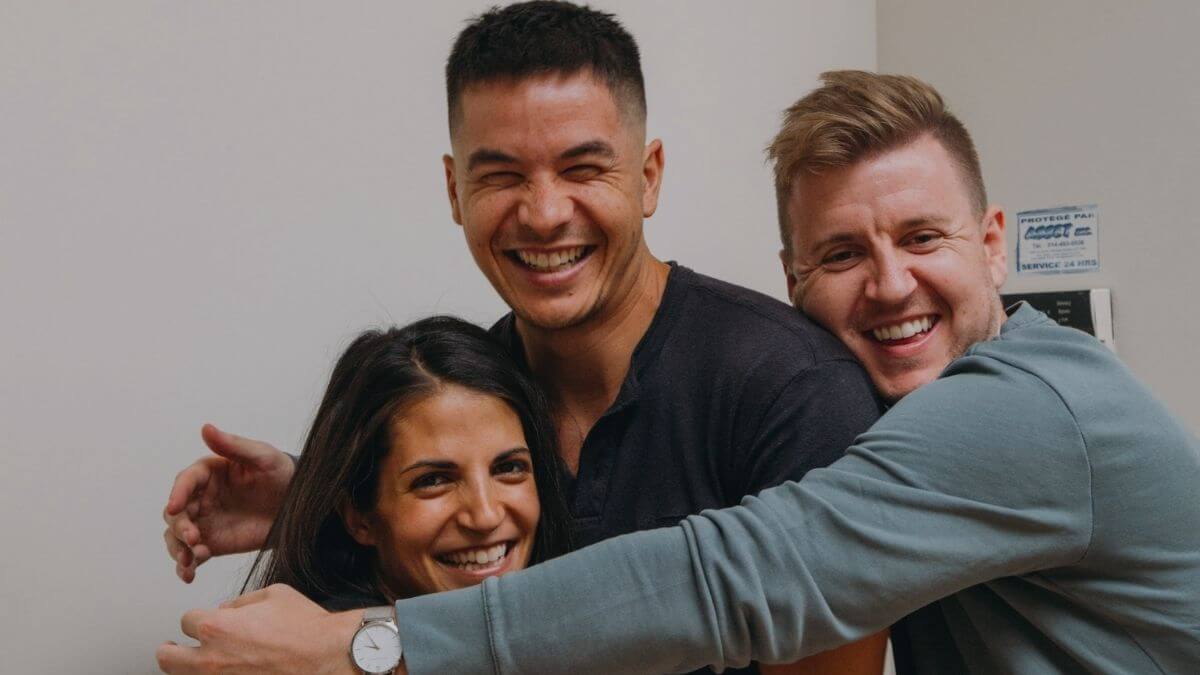 A couple of years ago, I went to Canada to visit and meet my significant other’s family. Although they were very sweet and made me feel very welcome, I faced a cultural barrier that I didn’t know how to deal with.

I didn’t know what to call them since in English we don’t use the same terms that we would use with our Family In-Laws in Spanish.

His mom wanted me to call her by her name instead of “Mrs.” (which was obviously an elaborate trap devised by her). But coming from Latin America, this felt very rude to me.

I could see my parent’s faces shocked that I was addressing my common-law partner’s mom by her first name. You see, in Latin America we use certain words to call our in-laws.

This Spanish vocabulary allows us to refer or address this part of our family in-laws in a very polite way.

So, if you’re dating or going steady with a Spanish speaker, trust me you need this information.

I’ve listed 9 popular words that we use in Spanish to call and refer to our relative in laws.

9 words to use to refer to and call your family-in-laws by in Spanish:

You’ll also see examples of how to use these words in conversations. By the end of this, you’ll be ready to address your in-laws in Spanish like a native speaker and most importantly – without breaking a sweat.

To put it simply: in my situation, suegra was the term that I was supposed to use when talking to my mother-in-law instead of calling her by her name. Below there are some examples so you can see it in practice. Remember that you can use this word to either refer to your mother-in-law or as a way to call her by.

This translation might sound very weird to you, but trust me it’s normal in Spanish:

Suegra, ¿dónde pongo estas bolsas?
Mother-in-law, where do I put these bags

¿Cómo dijiste que se llama tu suegra?
What did you say your mother–in-law’s name is?

Notice in the previous examples that when referring to or talking about your mother-in-law, you’ll need to use possessive adjectives.

Take Note: In Spanish, we also use the word ‘suegra’ to call or refer to our boyfriend’s mom. It doesn’t matter if you’re still not married. As long as you’ve dated for a while, you can start using this word as a polite term.

As you may imagine, suegro is the masculine version of ‘suegra’. In other words, ‘father-in-law’ in Spanish is suegro. As established before, this family vocabulary is not only suitable to talk about your in-laws in Spanish, but also as a polite and respectful way to name or call them.

Below are some examples on how to use this word. Notice that, depending on whether you’re referring to your father-in-law or directly talking to him, your sentence will use different elements.

María, ¿cómo ha estado tu suegro?
María, how has your father-in-law been?

Tu suegro me ayudó a arreglar la puerta.
Your father-in-law helped me fix the door.

Suegro, dice mi suegra que se venga a comer.
Father-in-law, my mother-in-law says that you should come to eat.

Cuñada is the Spanish word that we use to refer to or name our ‘sister-in-law’. Given that most sisters-in-law are close in age, you can either use ‘cuñada’ to call your sister-in-law or simply address her by her name.

In some cases, people use ‘cuñada’ as a playful way to call or refer to their crush’s sister. Additionally, in Mexico, young women tend to use the cutesy variation cuñis as an informal way to shorten the word ‘cuñada’.

Mi cuñada es doctora.
My sister-in-law is a doctor.

Cuñis, vamos ir al cine, ¿no quieres venir?
Sister-in-law, we’re going to the movies, do you want to come?

In Spanish, ‘brother-in-law’ translates to cuñado. We use this word to refer to our significant other’s brother. In Mexico, young women might use the variation cuñis as a way to call their brother-in-laws.

But since ‘cuñis’ is a cutesy and cheesy term, it’s not used among men. In other words, neither my brother nor my boyfriend would use the word ‘cuñis’ to call each other by. However, I can totally use it with my brothers-in-law.

Below are some examples of how to apply ‘cuñado’ in Spanish. Notice that we can use the plural form cuñados to refer to a mixed group (brothers- and sisters-in-law). In this case, ‘cuñados’ means siblings-in-law.

Cuñado, ¿qué vas a hacer para tu cumpleaños?
Brother-in-law, what are you going to do for your birthday?

Suegros is the Spanish word for ‘parents-in-law’. As a result, we use this term when referring to both our partner’s parents (both our suegro and suegra). This term is more commonly used to talk about our parents-in-law or to refer to them. Here are some sentences that will help you understand how to use ‘suegros’ in Spanish.

Mis suegros van a venir a cenar hoy.
My parents-in-law are coming for dinner tonight.

In Spanish, a mother-in-law or father-in-law uses the word nuera to refer to or to talk about her child’s significant other’s wife. In other words, ‘nuera’ means ‘daugher-in-law’ in Spanish. Unlike other terms from this list, we mainly use ‘nuera’ only when referring to a child’s wife.

To put it another way, your parents-in-law can call you by your name without this being considered rude or disrespectful. So, it was totally okay for my parents-in-law to call me Daniela, but to my eyes it would be very rude for me to do the same.

Below there are some examples that will show you how to apply this term better:

Doña Alicia, su nuera me pidió que la trajera esto.
Mrs. Alicia, your daughter-in-law asked me to bring you this.

Yerno is a word that we use U a person’s child’s husband. To put it simply, in Spanish, ‘son-in-law’ is translated as ‘yerno’. Just like ‘nuera’, parents-in-law don’t use ‘yerno’ as a way to directly call their son-in-laws, but they do use this word to refer to or talk about them.

Ayer vi a tu yerno con los niños.
Yesterday I saw your son-in-law with the kids.

Take Note: As a cultural note, in Mexico and Latin America, we’re taught to refer to or address an adult with a lot of respect. Therefore, when it comes to the relatives-in-law, we use the terms in this list. However, since they’re older than us, our parents-in-law can use our names to either call us or refer to us.

Familia política is the Spanish term that we use to refer to all our relatives-in laws, including ‘suegro’, ‘suegra’, ‘yerno’, ‘cuñada’, etc. Just like you use familia when describing your family as whole, you’ll use familia política in the same way. Below there are some examples of how to do this:

Notice that Spanish possessive adjectives allow you to make your sentences shorter. However, if you need to mention the person that you’re referring to, you can use the following phrase structure:

9. Consuegros – Parents-in-law of your child

Mis consuegros van a venir en Navidad.
The parents-in-law of my son are coming on Christmas.

Notice that consuegros is a plural term that includes both your child’s mother- and father-in-law.  If you want to refer just to one of them, you can use the following words:

Take Note: Unlike English, in Spanish, you don’t need to mention whether you’re talking about your son or daughter’s parents-in-law.

What about the rest of your in-laws?

Although we covered the most common terms for family-in-law in Spanish, the truth is that families are big – especially in Latin America. Fear not! For other in-law family members such as aunts, uncles, nieces, nephews, cousins and grandparents, we use the word político. This word comes from the general term for ‘family in-law’ which is “familia política” in Spanish.

Think of it this way: político (or ‘política’ for female members) allows us to express that a certain member is an in-law of ours. So, in order to say what family member you’re referring to, you’ll use family vocabulary.

To make this clearer, check the examples below.

Andrea y yo somos primas políticas.
Andrea and I are cousins-in-law.

Este coche es de mi hermana, se lo regalaron sus tíos políticos.
This car is my sister’s, it was a gift from her uncles-in-law.

In Spanish, you can simply use ‘señor’ or ‘señora’ to refer to your grandparents-in-law. However, if you’re familiar with them, you might be able to call them ‘mamá’, ‘papá’, ‘abuelito’ or ‘abuelita’. This is more a family decision than a language convention.

Unlike English, in Spanish, it’s extremely common to use family-in-law vocabulary to refer or to call our relatives in law. For that reason, in this list, I’ve included the 9 most popular terms that you need to know to call the members of your familia política. We’ve also included the additional terms that will help you in every possible “in-law” encounter (hopefully amicable encounters).

Remember that using these terms is a sign of politeness and respect for this part of your family, so if you’re dating a Spanish speaker, don’t be shy and start using these terms. Your in-laws are going to love it!!!

Hopefully, now you have a better understanding of what terms to use with your family in law in Spanish. ¡Buena suerte!