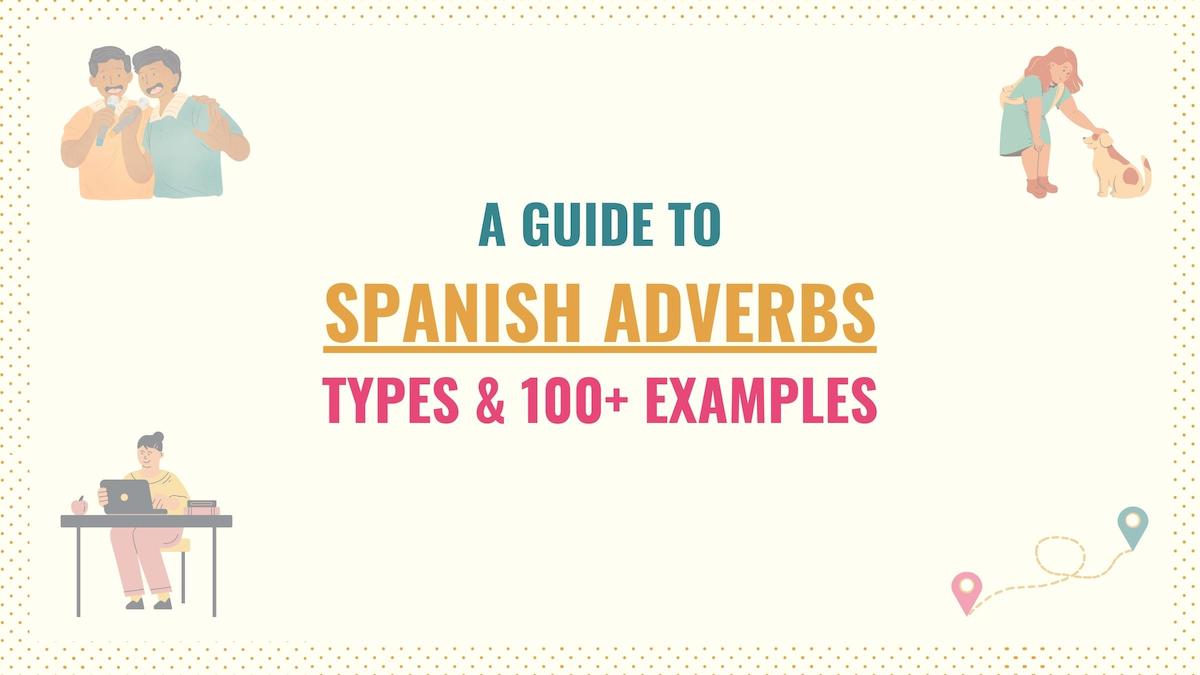 Like adjectives, Spanish adverbs are one of the parts of speech that make your sentences more clear and descriptive. So, in short, adverbs are a must when learning Spanish.

For that reason, in this guide, you’ll find key information about how these words work along with a list of over 100 basic adverbs you should include in your vocabulary immediately! Here is what we’ll cover:

So, let’s get started!

What Are Adverbs in Spanish?

Spanish adverbs are words that provide additional information about the verb. In other words, they describe the time, manner, frequency, or place an action takes place. They also intensify the characteristics described by an adjective or another adverb.

Adverbs in Spanish have a simple function: modifying a verb, an adjective, or another adverb. Simply put, we use these words to give extra details about the circumstances surrounding an action. For example:

Yo llegué temprano.
I arrived early.

In this example, temprano is an adverb that tells you more information about my arrival.

On top of describing verbs, Spanish adverbs can also intensify the qualities of an adjective or another adverb. In this case, adverbs are placed before the word they’re modifying.

¿Por qué comes tan lento?
Why do you eat so slowly?

As we’ll learn in the sections below, adverbs are classified based on the information they convey.

As established before, Spanish adverbs provide additional information about the circumstances surrounding the action. Based on their meaning, there are four main types of adverbs in Spanish:

In the sections below, you’ll find some examples of these words.

Tip: Depending on the course or book you use, you may find more classifications. However, these subcategories fit into one of the main categories listed above.

Adverbs of time help you place when or for how long an action takes place. These adverbs are time markers, and we use them along with the Spanish verb tenses.

Below is a list of the most common of adverbs of time in Spanish are:

And here are some examples so you can see how to use these adverbs:

Todavía no he terminado de comer.
I haven’t finished eating yet.

Adverbs of place & distance in Spanish

Spanish adverbs of place, or location, describe the location of the thing or person the verb is talking about. In simple words, these adverbs respond to the question “where?”. Here is a list of some basic adverbs of place:

La farmacia está cerca.
The pharmacy is near.

Dejé las llaves encima de la tele.
I left the keys on top of the TV.

Take Note: Aquí, acá, allí and allá may seem similar, but in reality, they express different amounts of distance. You can check the difference between these words by clicking here.

Adverbs of manner in Spanish

Adverbs of manner describe the way an action is done. They respond to the question “how?”. Below is a list of these types of Spanish adverbs:

No me hablas así.
Don’t talk to me like that.

Take Note: Many adverbs of manner in Spanish come from an adjective. These are words ending with -mente, which you’ll learn how to form in the section below.

Spanish adverbs of quantity and degree

As its name suggests, adverbs of quantity or degree help describe the amount or level of something. These words can modify verbs, but they’re more frequently used with adjectives and other adverbs.

Te amo demasiado.
I love you so much.

¡No comas tanto, por favor!
Don’t eat so much, please!

Take Note: The purpose of adverbs of quantity is to increase or decrease the qualities of an adjective or adverb. Some of these words may also work as adjectives of quantity (mucho, tanto, demasiado). However, unlike adjectives, adverbs do not mark the number or gender of a word.

Turning Adjectives into Adverbs in Spanish

Not all adjectives can become adverbs. Adjectives of nationality, colors, or physical appearance cannot be transformed into adverbs.

Here are some examples of common adverbs that are created by adding -mente to the end of adjectives. Notice that they’re the equivalent of words ending with ‘-ly’ in English.

Take Note: When using more than one adverb with -mente in a row, we must only add the ending to the last adverb in the list. Check the example above.

Like -mente, many patterns in Spanish can help you form words more easily. You can find these patterns for free in my Spanish Learning Kit.

As you’ve learned so far, adverbs are words. However, there are also adverbial phrases that you can use to provide extra information about a verb, adjective or other adverb.

Here is a list of adverbial expressions you may want to learn:

A veces, jugábamos en la lluvia.
Sometimes, we played in the rain.

Since they deliver information about the action, Spanish adverbs are a crucial element in any descriptive sentence. Here are some key points you should keep in mind:

Now that you’ve learned how these words work and the lists of the most common adverbs in Spanish, you’re ready to start using these words in your conversations.

Since adverbs are one of the fundamental types of words in Spanish and can take some time to learn the rules, types of adverbs as well as the various adverbs you’ll want to add to your vocabulary, I’ve created a PDF for this guide. Feel free to download a copy to study later as you practice your use of adverbs!