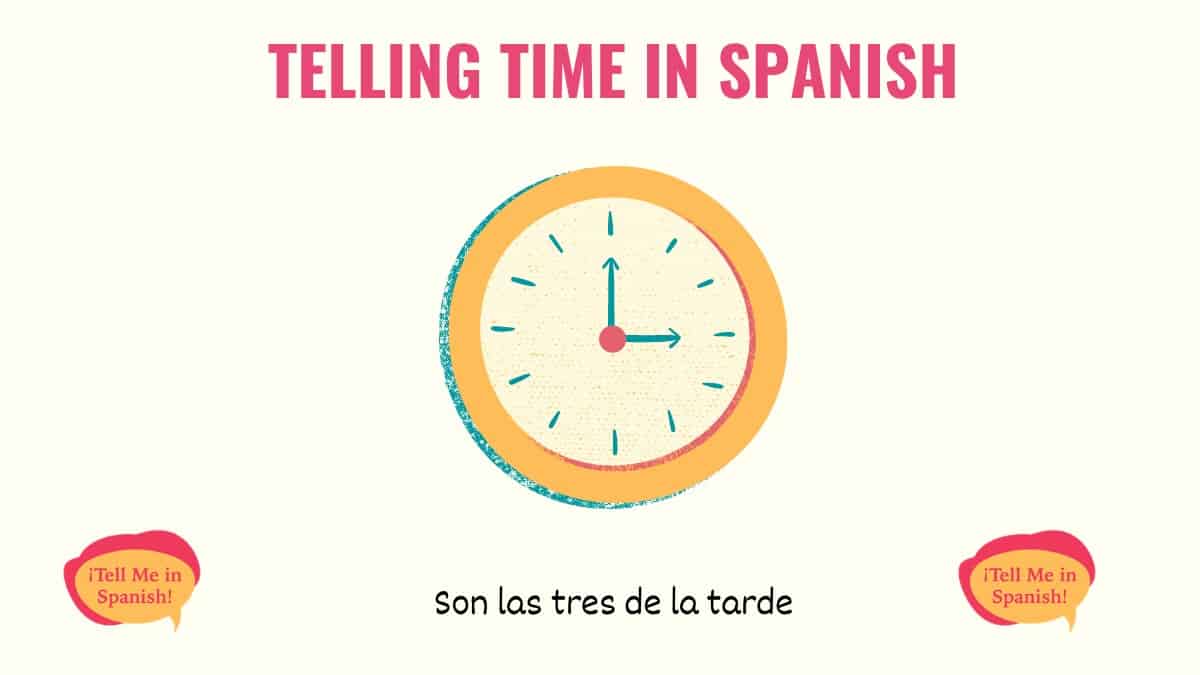 When learning Spanish, telling time is one of the first things that beginners learn since it allows them to practice numbers as well as other simple grammar structures. Given that this is a topic that you will need to use on an ongoing basis, it’s important that you know how to tell the time in Spanish.

In order to tell time in Spanish, the verb ser needs to be conjugated either in its plural form (son) or its singular form (es). In addition to this, feminine definite articles (las and la) also need to be used. Most hours work with plural elements while 1 am/pm works with a singular article and verb.

Telling time in Spanish is a simple interaction that can help you practice your Spanish. For that reason, in this article, I’ll show you different structures and words that we Spanish speakers use to tell the time.

Additionally, you’ll also learn how to tell time in past tense and how to ask someone for the time. Hopefully, by the end of this, you’ll have different structures and vocabulary that allow you to tell the time in Spanish in a more natural way.

How to tell time in Spanish

In order to tell time in Spanish, there are a few rules and elements that you need to know. For starters, you always have to use the verb ser. For most hours, you need to conjugate ‘ser’ in its plural form ‘son’. However, if the hour you’re talking about is 1 am/pm, ‘ser’ needs to be conjugated in its singular form ‘es’.

Additionally, when telling time in Spanish you need to use the feminine definite articles la and las. As you may already know, ‘la’ works with singular hours (1pm) while ‘las’ works with the rest of them (2,3,4,5, etc).

Let’s put this in some phrase structures and examples so you understand how these elements work together and practice telling the time in Spanish. Notice that if you want to be more specific, you can mention the part of the day that you’re referring to. However, this is optional and just needs to be used if you need to clarify this information.

Take Note: When telling time in Spanish, you can use media (half-hour/thirty) instead of using the number treinta. You’ll find that using vocabulary to replace numbers is a common practice since it allows you to make your sentences shorter and faster.

The literal translation for this in English would be “It’s one thirty”. However, this is how you say it in Spanish.

In many cases, you’ll be required to tell time using hours and minutes to be more precise. As a result, it’s important that you know how to add minutes when telling time in Spanish. In order to do this, you’ll use the conjunction, y (and).

Here is a phrase structure that you can use as guidance. Notice that y introduces the minutes. Aside from that, you’ll use the same elements that you learned before.

Take Note: Although using ‘y’ to introduce the minutes is grammatically correct and ‘well-spoken’ Spanish, many speakers omit this word most of the time. In fact, I feel very formal and fancy when using y all the time. Just make sure you place the minutes after the hours and you’ll be okay.

Times of the Day

Just like in English, when telling time in Spanish it’s also very common to specify the part of the day that you’re referring to. In order to do this, you need to use the following vocabulary and phrase structure:

When learning time in Spanish, many students get confused because they see that the rules that they’ve learned don’t seem to be applied in all contexts. This is because there’s a big difference between telling time and saying the time when an action or event takes place.

So far, you’ve learned that when telling what time it is in Spanish, you need to use the verb ser. However, if you need to say the time when an action takes place, you will use a verb that describes the action that you’re talking about.

Notice that in these types of sentences you’ll also need to use a slightly different structure. These examples are as common as telling time, so make sure you understand when you need to use each structure.

Related Resource: Qué hora vs A qué hora in Spanish

How to tell time in Spanish using ‘menos’

In conversational Spanish, there are some expressions that you can use to tell the time and that will make you sound faster and more natural. This is the case with the word menos.

In order to use menos, you need to subtract the minutes remaining to the next hour. However, menos only works after the 30-minute mark. In other words, we use veinticinco, veinte, quince, diez and cinco.

Menos can be translated as:

Although using menos is very common in Spanish, there is also a popular alternative that you could use instead of this word. This structure is slightly more similar to English and is more common in Latin American Spanish-speaking countries.

Son cinco a las siete, cerramos a las siete en punto
It’s 5 minutes before 7, we close at 7 on the dot

Telling time in Spanish in the past

In order to tell time in Spanish in the past tense, you need to use the imperfect tense. ‘Ser’ needs to be conjugated in this tense following the same rules: a plural conjugation for most hours and a singular conjugation for 1.

Take Note: Telling the time in the past is a way of providing background information about the circumstances when an action took place. As a result, you need to use the Spanish imperfect tense.

Here are some common words and expressions that you can use when telling time in Spanish.

Take Note: Notice that mediodía and medianoche are singular words that replace 12 am and 12 pm. As a result, if you use these words, the verb ser will need to be conjugated in the singular form.

How to ask the time in Spanish

Knowing how to ask the time in Spanish is almost as important as knowing how to tell people what time it is. Here are some popular phrases that you can use to ask the time. You can conjugate these expressions with tú and usted to make them more or less formal.

Fanny, ¿qué hora es? Fanny, what time is it?

Señor, ¿me puede regañar su hora? Sir, could you tell me what time it is?

Disculpe, señora, ¿qué hora tiene? Excuse, ma’am, do you have the time?

Telling the time in Spanish is a topic that you should be comfortable with since you might need to use it in different situations. For that reason, we discussed different structures and vocabulary that you can use to tell time.

As a reminder, here are some key points to remember:

Hopefully, now you have a better understanding of how to tell time in Spanish. Buena suerte.