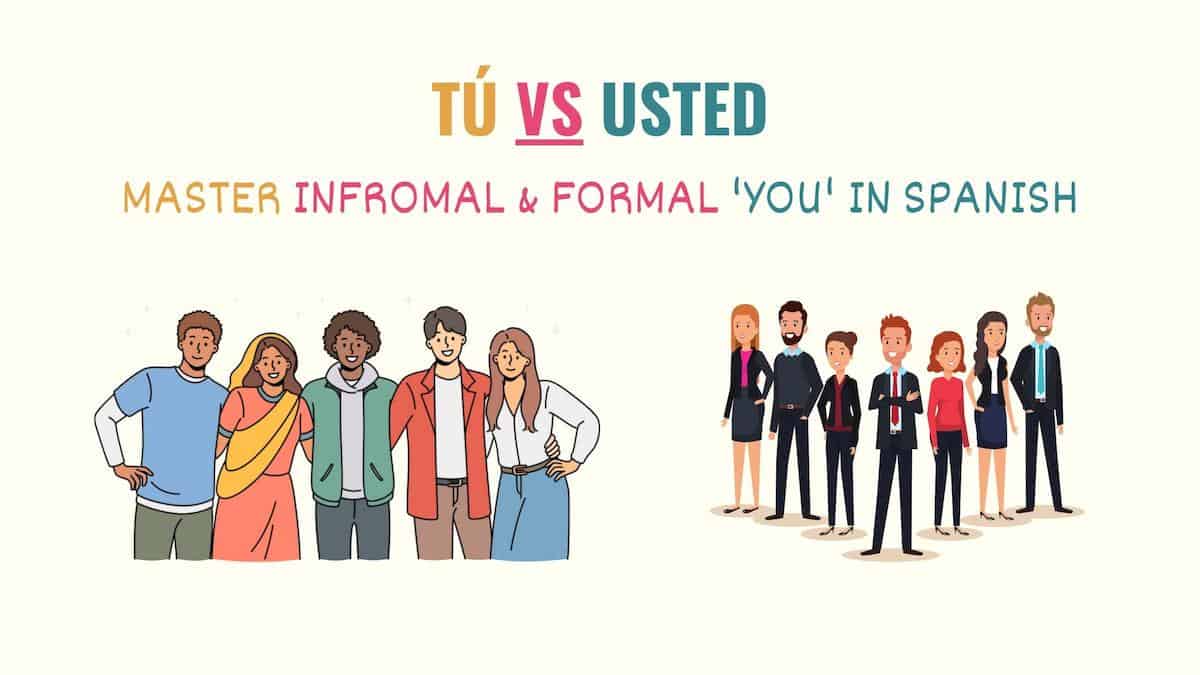 Should you use ‘tú’ or ‘usted’? That is the question.

Why? Because even though they both mean you, in Spanish, ‘tú’ and ‘usted’ are informal and formal ‘you’, respectively. In other words, each pronoun is used with a specific group of people.

Tú vs usted is a challenging topic for many learners. However, using formal and informal Spanish correctly is essential for your communication. For that reason, in this article, we’ll go through the following:

What Is Formal and Informal Spanish

Formal and informal Spanish refers to the degree of respect and formality people use when addressing or speaking to someone. This level of formality is shown by using tú or usted. Check the examples below:

Yo soy Daniela. ¿Tú cómo te llamas?
I’m Daniela. What is your name?

Yo soy Daniela. ¿Usted cómo se llama?
I’m Daniela. What is your name?

As you’ll learn later in this article, choosing between formal and informal Spanish depends on different factors. As you can see in the examples above, ‘tú’ vs ‘usted’ also implies that you must use the corresponding conjugation and related pronouns for that subject.

Take Note: In standard Spanish, ‘tú’ and ‘usted’ are the subject pronouns for you. However, vos is the equivalent of ‘tú’ in Rioplatense Spanish. So, in these countries, ‘vos’ is the pronoun they use for the informal you.

As formal ‘you’, usted shows respect. Therefore, it is used to address elders, authority figures, and some strangers. On the other hand, tú expresses familiarity between people. As a result, it is suitable for friends, relatives, and people your same age.

Using informal and formal ‘you’ in Spanish depends on how intimate you are with the person you’re talking to and the degree of respect you wish to show. In Spanish, we must speak respectfully to our elders, people with higher authority, or who seem older than us.

Some examples of people that you may use ‘usted’ with include:

‘Tú’ is informal ‘you’ in Spanish. It implies familiarity and equality between the speakers. In other words, informal Spanish is used with your equals (people your age or the same authority as you). You use ‘tú’ instead of ‘usted’ with:

Take Note: Some people prefer to be addressed with ‘tú’ instead of ‘usted’. “Tutéame” or “Háblame de tú, por favor” are commonly used to ask someone to change how they address you. They literally mean “address me informally”.

How to Use Formal and Familiar Spanish

Now that you know with whom you must use formal and informal Spanish, you should learn some basic rules to apply these pronouns correctly. So, to use ‘tú’, and ‘usted’ correctly, you need to ensure to:

Tip: If you use formal Spanish, you must also ensure that your vocabulary is appropriate for the situation. For instance, you’ll need to use a formal greeting instead of an informal one, etc.

Given that each Spanish subject pronouns has its own set of verb endings, formal and informal ‘you’ differ in their conjugations.

Check the examples below, so you can see the difference between tú and usted from a conjugation point of view:

¿Cuántos años tiene?
How old are you?

¿Cómo está, Señor Aguirre?
How are you, Mr. Aguirre?

¿Cuántos años tienes?
How old are you?

¿Cómo estás, amigo?
How are you, pal?

In the present tense, the difference is that the conjugations for ‘usted’ drops the final ‘s’. The graphic below shows you the regular endings you must use for each pronoun in different tenses:

Take Note: Unlike English, in Spanish you can omit the subject pronoun in most sentences. This is because conjugated verbs are distinct and specific enough to allow the receiver to infer who the subject is.

Formal and informal pronouns in Spanish

Tú and usted are subject pronouns. However, depending on the sentence, you may need to use different sets of pronouns. When using formal and informal Spanish, you must ensure that these new pronouns match the person you’re addressing.

The pronouns that you have to keep an eye on are:

Check these examples so you can see the difference between formal and informal pronouns:

Examples of formal ‘you’

Disculpe, ¿cómo se llama?
Excuse me, what is your name?

Señora, este es su recibo.
Ma’am, this is your receipt.

Esto es para usted.
This is for you.

Examples of informal ‘you’

¿Cómo te llamas?
Excuse me, what is your name?

Oye, este es tu recibo.
Hey, this is your receipt.

Esto es para ti.
This is for you.

The graphic below has a list of formal and informal pronouns in Spanish.

Take Note: In Standard Spanish, Ustedes is the plural form for both ‘tú’ and ‘usted’. In this case, to know whether formal or informal Spanish is being used, you must pay attention to the vocabulary and the context.

It’s not always easy to identify if you need to use formal or informal ‘you’ in Spanish. However, being able to apply ‘tú’ and ‘usted’ correctly will help you sound more natural. Here are some key points that you shouldn’t forget:

Download the Formal vs Informal ‘You’ Spanish Cheat Sheets

Feel free to download this guide’s PDF with summarized notes, key points, examples, and graphics on ‘tú’ vs ‘usted’.