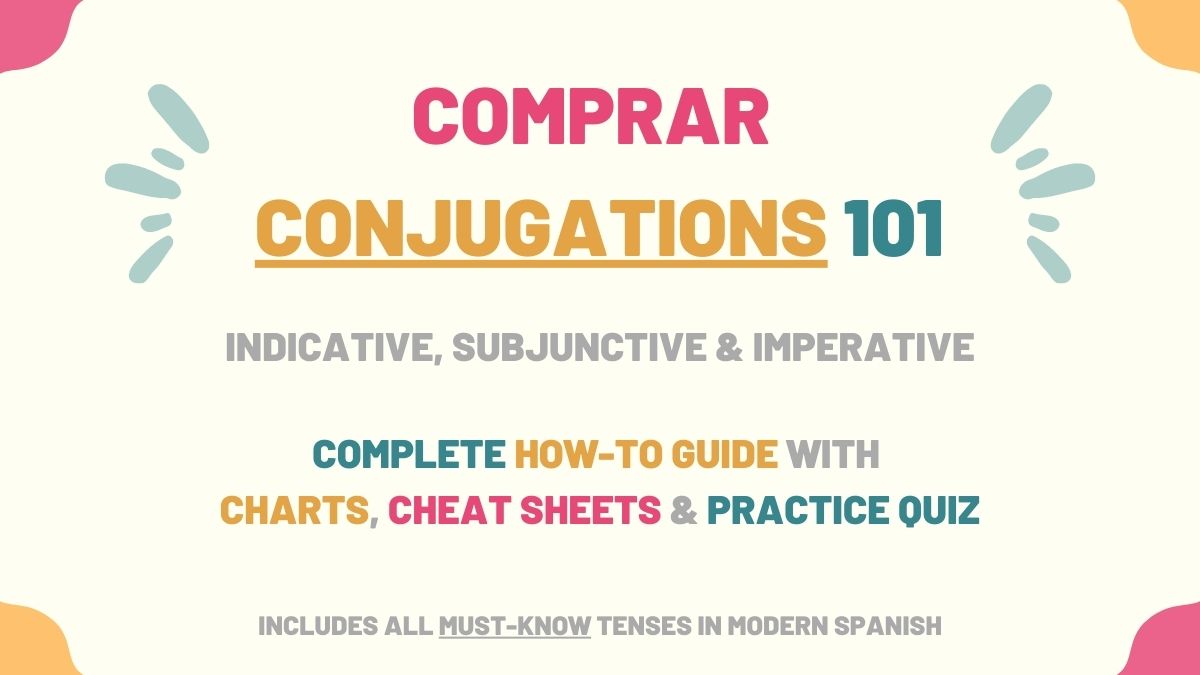 Comprar is a common regular verb that can help you understand the conjugation pattern of -AR verbs. Since this is a necessary verb for daily life interactions, in this guide, you’ll learn the most important conjugations of comprar.

The preterite form of comprar is used to talk about products or things someone bought at a specific moment in the past. Te compré estas flores.

The imperfect conjugation of comprar refers to things you used to buy or bought at some point in the past. For example, mis hermanos y yo comprábamos muchos dulces. Depending on the sentence, in the imperfect tense, ‘comprar’ can be translated as ‘used to buy’ or ‘bought’.

In the near future, comprar refers to things you currently plan to buy soon in the future. Mañana voy a comprar un reloj nuevo.

The future simple communicates that someone will buy a product or service at some point in the future. The future forms of comprar are all regular. For instance, algún día compraré ese coche.

The conditional form of ‘comprar’ conveys that someone would buy something if certain circumstances are met. For example: si pudiera, compraría ese coche.

To conjugate the past perfect tense of ‘contar’, you need to use the imperfect form of haber + contado, which is the past participle form of ‘contar’. In this tense, ‘hablar’ can express that you bought something before some other reference point in the past. For example: pensé que ya habías comprado los boletos.

The future perfect of ‘comprar’ is built with the formula future form of haber + comprado. With this tense, ‘comprar’ expresses that someone will buy something by or before a certain time in the future. Creo que a esa hora ya habré comprado los boletos.

The conditional perfect of comprar refers to things you would have bought if a condition was met. For example, si hubiera sabido que venías, habría comprado más comida.

Progressive tenses are used to talk about actions that are in progress at the moment of speaking. In other words, we use ‘comprar’ to express that someone is buying something right now. For instance, Cindy está comprando pollo. These tenses are formed with estar (conjugated) + comprando.

Since it’s a regular verb, the subjunctive conjugations of comprar are formed by adding the corresponding subjunctive endings to the stem compr-. The subjunctive mood refers to wishes, suggestions, requests, and hypothetical situations.

The imperfect subjunctive of ‘comprar’ refers to past wishes, requests, or hypothetical situations. For example, si comprara este carro, me quedaría sin dinero.

In Spanish, the imperfect subjunctive has two conjugation models:

The past perfect subjunctive of ‘comprar’ talks about things you wish you bought or the hypothetical outcomes if you had bought something. For instance: ¡lo hubieras comprado!

The affirmative imperative of ‘comprar’ is used to command people to buy something. For instance: compra dos litros de leche.

Notice that the negative imperative of ‘comprar’ uses the same conjugations as the present subjunctive. These negative commands can be used to order people not to buy something. Por favor, no compren más dulces.

Now that you’ve learned all the conjugations of comprar, check the following examples to see how to apply this verb into your conversations.

¿Cuándo van a comprar los boletos?
When are you buying the tickets?

Take Note: Some verbs in past participle form can also be used as adjectives. Those verbs work with estar to provide information about a person or object.

I’ve created a PDF for you to download containing all of the conjugation tables, verb characteristics, and uses so you can study it at your own pace!

Put your skills to the test by taking our comprar quiz and practice conjugating this verb in all of the tenses listed above.