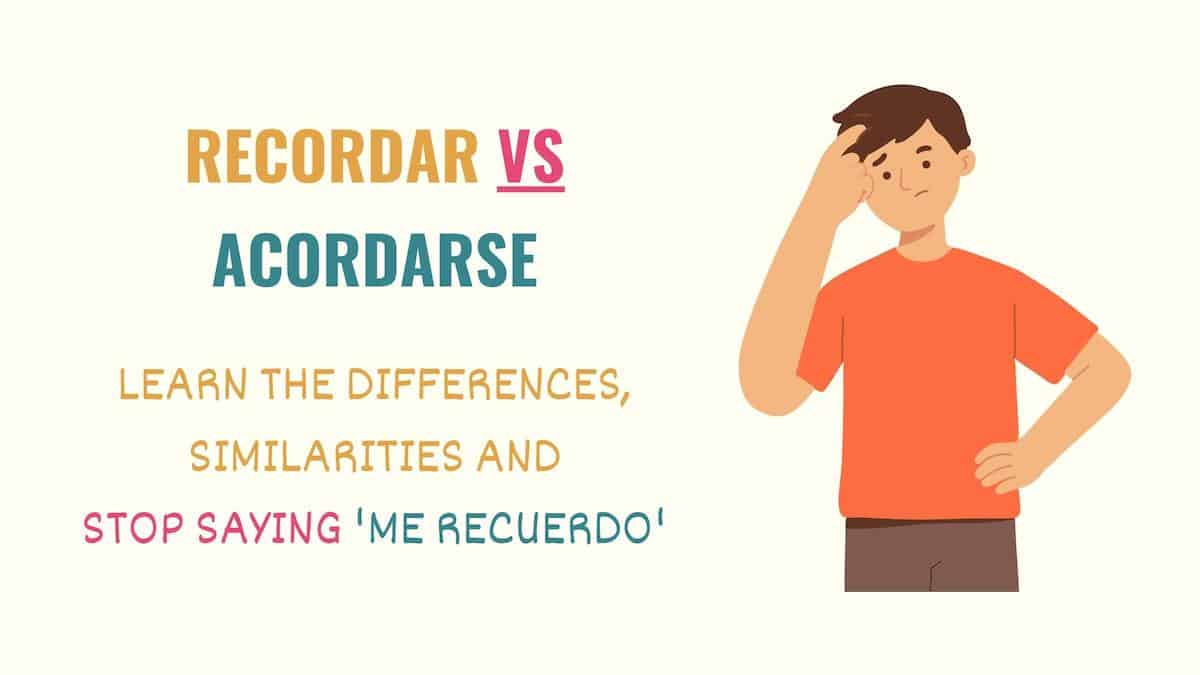 Me recuerdo or no me recuerdo is a common mistake people make when trying to say “I don’t remember” in Spanish. If you make this mistake too, then it means that you need to understand the difference between ‘recordar’ and ‘acordarse’.

Mixing ‘acordarse’ and ‘recordar’ is a common mistake that you can easily fix and doing so will help you sound more natural. To overcome this issue, in this article, you’ll learn:

Tip: TLDR? Click here to jump to the Key Points and summary of recordar vs acordarse.

Difference Between Recordar and Acordarse

In Spanish, acordarse and recordar are used to talk about things we remember. So, unlike other tricky words, these verbs do not differ in meaning but rather in the structures they use.

To put it simply, when referring to memories, ‘recordar’ and ‘acordarse’ are synonymous and can be translated as ‘to remember’ or ‘to recall’. Check these examples below:

Sí me acuerdo de Karla.
I do remember Karla.

No recuerdo este lugar.
I don’t remember this place.

¿Quién es ella? No la recuerdo.
Who is she? I don’t recall her.

As you’ll notice in the examples above, these verbs are surrounded by different elements. For example, when talking about someone’s memories, acordarse is a pronominal verb. This means that it must always be used with a reflexive pronoun.

On the other hand, recordar is a transitive verb. As a result, most of the time it must be followed by the thing or person you’re remembering. Unlike ‘acordarse’, ‘recordar’ doesn’t work with reflexive pronouns or the preposition ‘de’.

Another significant difference between these two verbs is their degree of formality. Since ‘recordar’ is more formal, ‘acordarse’ is more popular in daily conversations.

In the sections below, you’ll learn more about the structures you need for these verbs, as well as more nuanced differences in how these two verbs are used.

Take Note: Both ‘acordarse’ and ‘recordar’ are stem-changing verbs in Spanish. When conjugated to the present tense, both verbs have a O to UE spelling change.

When & How to Use Recordar

In Spanish, recordar is a transitive verb. In other words, unless it’s clear, the verb must be followed by the thing or person you’re remembering. Because of this, ‘recordar’ works with different elements depending on the thing you’re talking about.

We use ‘recordar a’ when talking about people:

¿Recuerdas a mi novia?
Do you remember my girlfriend?

Hoy recordamos a nuestros seres queridos.
Today we remember our loved ones.

You can use recordar followed by a complement when referring to places, things, or activities you must do. This complement can be an infinitive verb or a noun.

Recuerden enviarme sus proyectos.
Remember to send me your projects.

No recuerdo tu nombre.
I don’t remember your name.

¿Y esos quiénes son? No los recuerdo.
Who are those? I don’t recall them.

Take Note: Depending on the sentence, ‘me’ and ‘te’ can be reflexive or object pronouns. ‘Recordar’ means that a person remembers something or someone.

¿Me recuerdas?
Do you remember me?

In more advanced structures, ‘recordar’ can be followed by the connecting word que or a question word.

¿Recuerdan dónde dejé mis llaves?
Do you remember where I left my keys?

Take Note: Recuerdo de is a popular expression in Spanish. However, it doesn’t work as ‘acordarse de’. In fact, it refers to souvenirs from an event, such as recuerdo de boda (wedding souvenirs).

When combined with indirect object pronouns, recordar is used as a synonym of ‘to remind’. For example:

Me recuerdas mañana.
Remind me tomorrow.

¿Le recordaron a Jon que hoy tenemos junta?
Did you remind Jon that we have a meeting today?

Notice that Spanish indirect pronouns won’t always be included as part of the English translation.

When it comes to acordarse vs recordar, there’s a unique meaning that can only be built with ‘recordar’. This use is to express that something or someone reminds you of something.

Juan me recuerda a su papá.
Juan reminds me of his dad.

Este pueblo nos recuerda a nuestro hogar.
This town reminds us of our home.

This meaning is another significant difference between ‘recordar’ and ‘acordarse’.

When & How to Use Acordarse

‘Acordarse’ is a pronominal verb and it must be conjugated with reflexive pronouns.

Additionally, this verb is always accompanied by a preposition, which you’ll use to introduce the thing, person, activity, or place you’re remembering. Here are some examples:

Perdón, pero no me acuerdo de ti.
Sorry, but I don’t remember you.

Notice that de can be followed by:

Although this is the most common structure, ‘acordarse’ can also be used with que when followed by a conjugated verb or with Spanish question words when requesting more information about a memory:

Me acuerdo que ese día fuimos al cine.
I remember that we went to the movies that day.

Like ‘recordar’, you can also use ‘acordarse’ to remind something to someone else. Since the meaning is slightly different, in this case, you’ll have to use indirect object pronouns instead of reflexive pronouns.

¿Le acordaste a Tania de la fiesta?
Did you remind Tania about the party?

Paco me acordó de tu cumpleaños.
Paco reminded me about your birthday.

Acuérdale de tu dinero.
Remind him about your money.

Remember that with Spanish affirmative commands reflexive and object pronouns must be attached to the verb.

Since they both mean ‘to remember’ in Spanish, recordar and acordarse are key verbs that you must add to your vocabulary. But because they work with different structures, people usually make common mistakes when using these verbs. Here are some key points to remember:

No me recuerdo.
I don’t remember.

No recuerdo.
I don’t remember.

No me acuerdo.
I don’t remember.