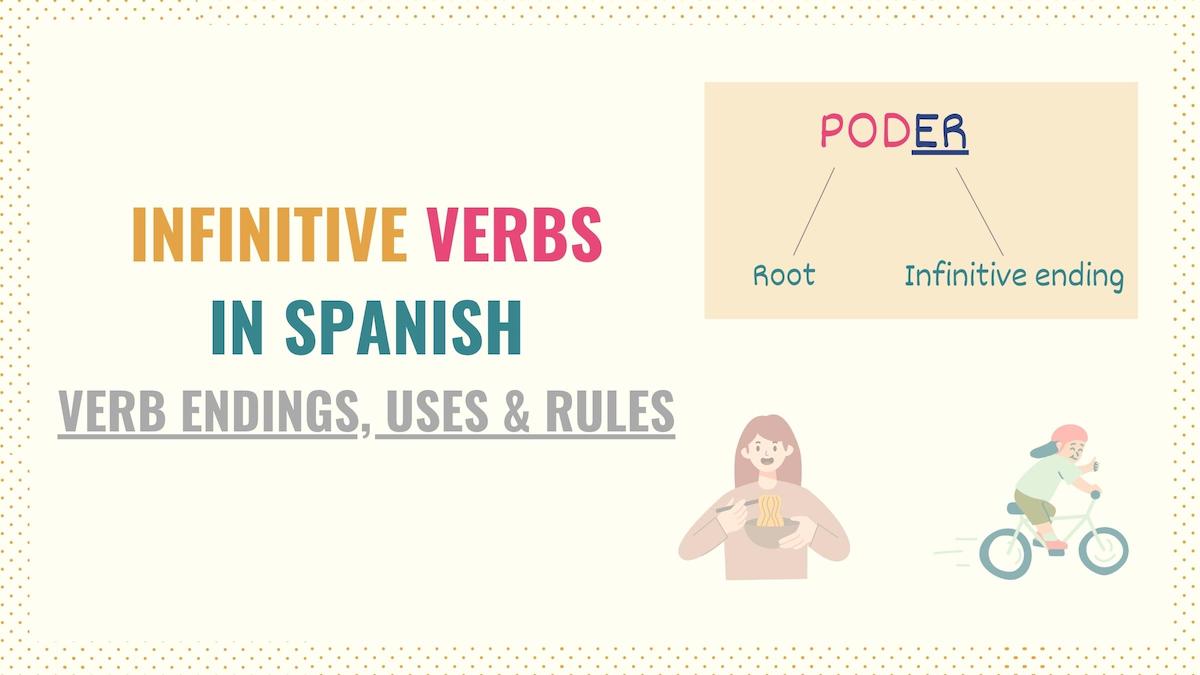 Have you ever heard the term infinitive verbs in Spanish? Infinitives are crucial to identifying the conjugation model you must use (-ar, -er, -ir). But, on top of this, they also have other basic, yet essential applications you need to know.

So, in this guide to Spanish infinitive verbs, you’ll learn all the crucial information you need to use these verbs correctly. Below is an overview of what we’ll go through:

To make things easier and more practical, I’ve included examples throughout the guide 😉

What Are Infinitive Verbs in Spanish?

Spanish infinitive verbs are verbs in their most basic form. In other words, they are verbs which are not conjugated. Because of this, infinitives do not indicate who performs the action or when it occurred. Infinitive verbs in Spanish can be recognized by the endings -ar, -er, or -ir.

As mentioned above, Spanish verbs have three infinitive endings: –ar, -ir, and -er. For example:

Notice that reflexive verbs also use these infinitive endings. They are placed before the pronoun se whose purpose is to let you know that such verbs have a reflexive conjugation.

For the most part, words ending with –ar, -er, and -ir are infinitive verbs. However, you may find some exceptions to this rule, such as ‘mujer’, ‘militar’, ‘mártir’.

As you’ll learn in the sections below, infinitive endings also indicate the pattern you must use when conjugating Spanish verbs to different tenses.

Take Note: The three infinitive forms are important. However, over 80% of the verbs you’ll use end with -AR. In other words, -AR verbs are the most common type of verb in Spanish.

How to Conjugate Infinitive Verbs in Spanish

We conjugate infinitive verbs to communicate when an action took place and who performed it.

To conjugate an infinitive verb in Spanish, you must replace the infinitive ending (-ar, -er, or –ir) with a conjugated ending. Put it another way, we must add a tense ending to the verb’s root.

Take hablar and comer as examples.

Yo hablo español.
I speak Spanish.

In Spanish, –ar, -er, and -ir verbs have different conjugation endings depending on the subject pronoun and the tense (moment of time) you need to use. You can see an example in the graphic above.

Take Note: Verbs are one of the nine parts of speech in Spanish. They’re an indispensable part of the sentence because they communicate that an action is being performed. If you want to check the conjugation endings for other tenses, check my guide on the most common tenses in Spanish.

Attaching pronouns to an infinitive

Infinitive verbs in Spanish often work with reflexive, direct, or indirect object pronouns. These pronouns must always be attached to the infinitive if that’s the only verb in the sentence. So, unlike English, Spanish infinitive verbs and pronouns become a single word.

La maestra quiere verte.
The teacher wants to see you.

¿Y las verduras? Voy a lavarlas.
And the vegetables? I’m going to wash them.

When & How to Use Spanish Infinitive Verbs

On top of helping you determine the conjugation model you need, infinitives in Spanish are used:

Check the sections below to learn more about these applications and the structures you need to use.

Spanish infinitive verbs are used as nouns to name an activity. In these types of sentences, the infinitive verb may work as the subject of the sentence:

Take Note: Most of the English –ing verbs are the equivalent of Spanish present participles (aka gerunds). However, when an -ing verb is working as a noun, we must always use an infinitive verb in Spanish.

To give impersonal commands

One of the most common ways to use infinitive verbs in Spanish is to express prohibition or give commands in an impersonal way. This means you’re not addressing a person in particular but rather whoever sees your sentence.

No correr.
No running.

Take Note: If you want to give commands directly to someone, you need to use the verb in its imperative form.

To complement a transitive verb

Spanish transitive verbs need a complement to fully express their meaning. When referring to actions or activities, this complement is an infinitive verb. Here are some examples of verbs that are followed by infinitives:

Me gusta mucho leer.
I like reading a lot.

No pude terminar mi tarea.
I couldn’t finish my homework.

Infinitive verbs in Spanish are the only verbs that can be placed after a preposition. Below are some examples of these sentences:

Voy a hablar con ella.
I’m going to talk to her.

De querer sí quiero, pero no puedo.
I want to, but I can’t.

Necesito algo para limpiar las ventanas.
I need something to clean the windows.

Take Note: Many constructions with Spanish prepositions cannot be literally translated into English. For example, dejar de (stop doing something), volver a (do something again), acabar de (just finish doing something).

Forming the near future tense in Spanish

Infinitive verbs in Spanish are used to communicate that an action is going to take place soon in the future. This is what is called the near future and we must use structure ir + a + infinitive to form this tense:

¿Cuándo vas a llegar?
When are you arriving?

Mañana no vamos a trabajar.
We’re not working tomorrow.

Take Note: Notice that we use infinitives to describe the action that will take place. Ir tells you who is going to perform it.

Learning how and when to use infinitive verbs in Spanish will help improve your command of the language. Here are some key points you should never forget:

Download a copy of the infinitive cheat sheets to study the key points, highlights, rules, and uses of verbs in this form at your convenience.