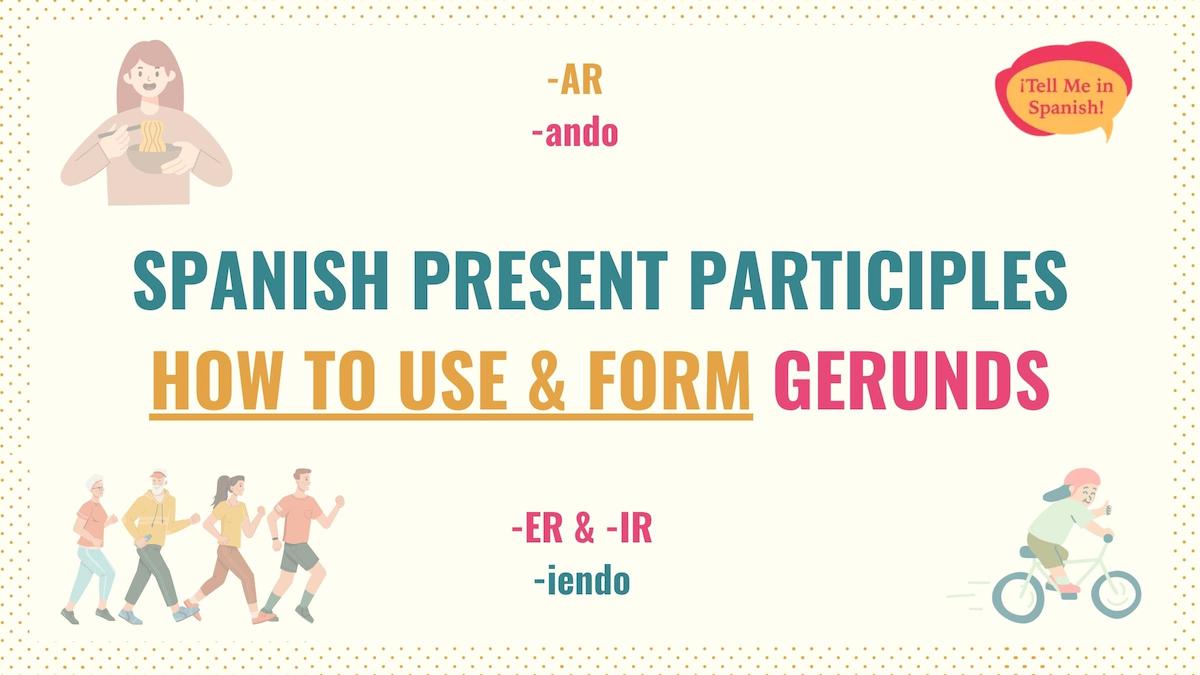 The present participle in Spanish is key to talking about ongoing actions. In other words, we use the present participle, also called gerund, to form progressive tenses and communicate that an action is occurring at the moment of speaking or it is still happening.

Since Spanish gerunds can help you improve your command of the language, in this guide, you’ll learn how to use and form these words. Here is a quick overview of the things we’ll cover:

How to Form the Present Participle in Spanish

In other words, to form present participles in Spanish, you must drop the infinitive ending of the verb (-ar, -er, -ir) and add the corresponding gerund ending.

Check these past participles examples:

Take a second look at the previous examples. When removing their infinitive ending, the stems of these verbs end with a consonant.

However, certain verbs have a stem that ends in a vowel. With these verbs, you must use the present participle ending -yendo to keep the pronunciation consistent. Here are some examples of verbs that use this ending:

Take Note: Spanish gerunds are the equivalent of English verbs ending in -ing. In some cases, English -ing verbs might be translated as a Spanish infinitive. To learn more about this, check the section on when not to use gerunds.

In Spanish, irregular present participles are verbs which have significant changes, such as:

When it comes to gerunds, it’s more common to see stem-changing verbs than irregular verbs. With these verb forms, there are two types of stem changes and they only affect certain -IR verbs.

In Spanish, gerunds often work with a reflexive or direct object pronoun. When this happens, you need to make sure that you place the pronoun in the correct position. Reflexive and object pronouns can be placed in two different positions when working with present participles. Both options are equally correct:

¿Le estás marcando?
Are you calling her?

¿Está marcándole?
Are you calling her?

When attaching the pronoun, we’re changing the stress of the syllable. As a result, we must add an accent mark. In this case, your endings will look like -ándo or -iéndo. For example: ‘hablándole’, ‘mintiéndole’, ‘diciéndole’, etc.

How & When to Use Spanish Present Participle Verbs

Now that you’ve learned how to form the present participle in Spanish, it’s time to learn how and when to use it.

Gerunds in Spanish are commonly used in the structure estar + gerund. This is the formula for progressive tenses, which refer to actions that happen at the time of speaking.

When working alone, gerunds can express consequences or convey the time an action takes place. Since these are advanced uses, the translation may vary. Here are some examples:

Llegando te digo.
I’ll tell you when I arrive.

Estar + gerund is probably the verb phrase most Spanish learners know. However, there are other popular structures with present participles that you should know:

Espérame, ya voy llegando.
Just wait, I’m getting there.

Take Note: Spanish gerunds are impersonal verbal forms. This means that gerunds only focus on delivering information about the action rather than who performed it (subject) or when it occurred (tense).

When Not to Use Gerunds in Spanish

When working as nouns

To talk about the immediate future

Present participles in Spanish are a crucial part of your communication. So, here are some key points you should never forget:

If you’re ready to practice Spanish gerunds, take a quiz with these present participle exercises:

You can download a PDF copy of the cheat sheets for this guide to refresh your knowledge of the Spanish gerund form when you need it.