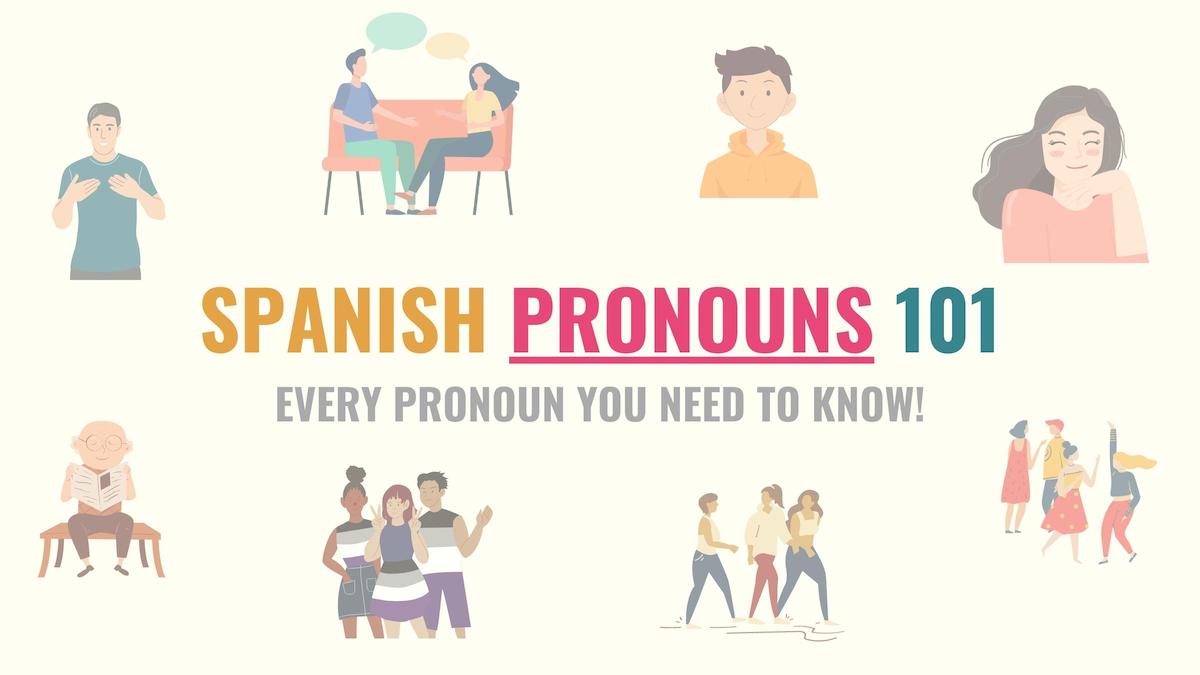 Spanish pronouns are fundamental for communicating. Do you know why? Because these words allow you to shorten sentences while clarifying who or what you’re talking about. So, in short, pronouns are essential when learning Spanish.

But since pronouns vary depending on their function within a sentence, many people confuse these words or have issues using them. For that reason, in this guide, you’ll learn all the pronouns in Spanish (including all personal pronouns) and how to use them.

The topics we’ll cover include:

Before we jump in, the first thing to know is that most of these different types of pronouns fall into a larger category, called personal pronouns. As we go through this guide, I’ll point out which are not personal pronouns and explain why.

Take Note: Thinking that a Spanish personal pronoun only replaces a person is a common misconception. They also replace things! They are called personal pronouns because they match the number and gender of the noun which they’re replacing.

Subject pronouns in Spanish replace the subject of a sentence. In other words, these pronouns replace the person or thing that performs the action.

Spanish subject pronouns in Spanish are:

Ella es mi prima.
She is my cousin.

¿Ustedes de dónde son?
Where are you from?

Take Note: Notice that Spanish has a formal and informal ‘you’. Although they have the same translation, these pronouns are applied in different contexts.

Reflexive pronouns in Spanish are used when conjugating pronominal verbs (verbs that end in -se), such as reflexive verbs. We use reflexives to talk about actions that people perform on themselves.

As you’ll see in the examples below, reflexive pronouns in Spanish can be translated into English by using a subject pronoun.

Tip: Reflexive verbs are a common type of pronominal verb. However, not all pronominal verbs are reflexive. Sometimes, a pronominal verb may have a different meaning than its standard counterpart —for example, despedir (to fire) vs despedirse (to say goodbye).

*Mí and ti are the equivalents of ‘yo’ and ‘tú’, respectively. However, they take this irregular form with most prepositions. Notice that ‘mí’ and ‘ti’ become one single word when used with the preposition con.

Ve con ella.
Go with her.

Yo voy contigo.
I’ll go with you.

Tip: Mí and ti are used with most prepositions except entre, incluso, según, menos, and excepto. When using those specific prepositions, use yo and tú instead.

Direct object pronouns in Spanish are:

Below are some examples of how to use these words. Notice that Spanish direct object pronouns replace both people and things.

Los invité.
I invited them.

Ya lo encontré.
I already found it.

Take Note: Object pronouns are placed before the conjugated verb in Spanish. Also, notice that because you must mark the gender of a noun, ‘it’ has a masculine and feminine form.

Take Note: Some articles may translate indirect articles as to me, to you, etc. This is because, in some sentences, indirect objects may be preceded by a preposition.

Sentences with an indirect object:

Le compré unas flores.
I bought him some flowers.

Relative pronouns in Spanish include:

Me dijo que no iba a venir, lo cual no tiene sentido.
She told me she wouldn’t come, which doesn’t make sense.

The Spanish possessive pronouns are:

Here are some examples of how to use these pronouns:

Disculpa, ¿esto es tuyo?
Excuse me, is this yours?

Demonstrative pronouns in Spanish express the distance between the speaker and the noun you are replacing.

Notice that the plural form of demonstrative pronouns is formed by simply adding an s to the end of the pronoun. The one exception being ‘aquel’, whose plural form is ‘aquellos’.

Esta blusa es bonita, pero prefiero esta.
That blouse is pretty, but I prefer this.

Spanish pronouns are an essential part of any language. This is because they replace a noun without altering the meaning or impacting the coherence of a sentence. Here are some key points you must remember about pronouns in Spanish:

While I hope I’ve made Spanish pronouns as simple as possible for you to understand, you’ll likely need to revisit this topic numerous times as you learn Spanish. Please feel free to download a copy of the pronouns cheat sheets PDF so you can refer back to it whenever you need to!