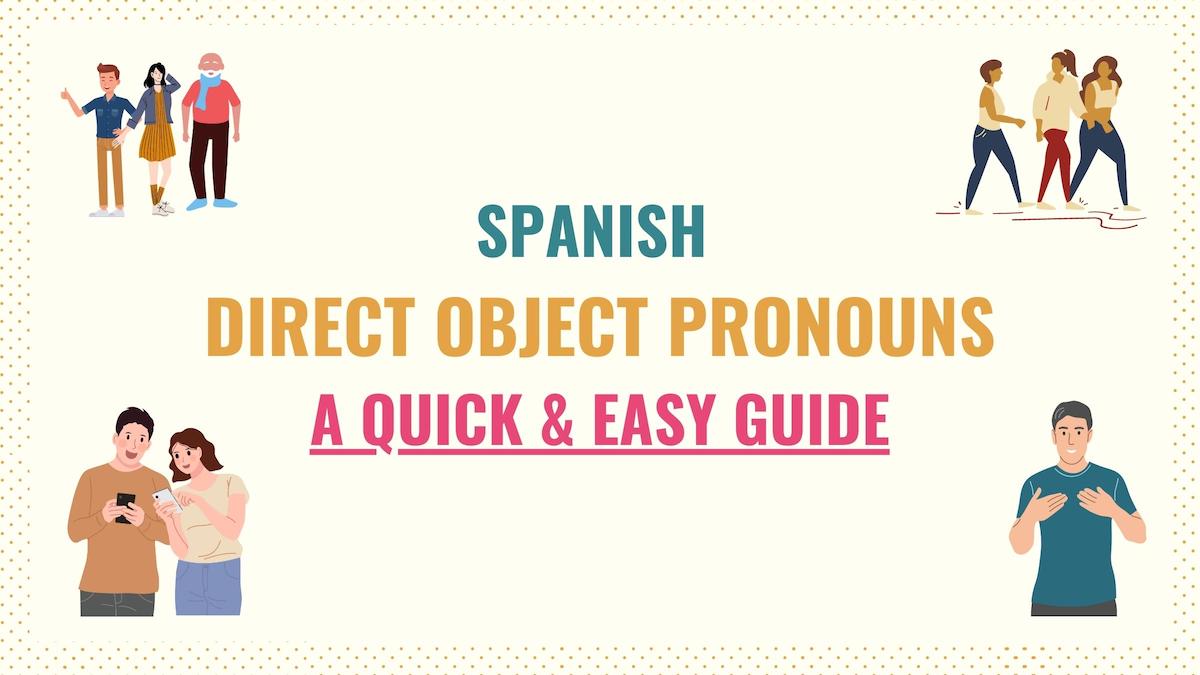 Here is a quick overview of what we’ll cover:

To make things easier, I’ve included graphics and examples. By the end of it, you should feel more comfortable using Spanish direct object pronouns.

Tip: Misplacing or not using direct object, reflexive and indirect object pronouns is one of the most common mistakes that lead to speaking broken Spanish.

¿Y las llaves? ¿No las has visto?
And the keys? Have you seen them?

What Is a Direct Object in Spanish & How to Find It

In Spanish, a direct object is a noun that receives the action in a sentence. This noun can refer to a thing, animal, or person.

Check these sentences with a Spanish direct object:

Voy a bañar a los perros.
I’m going to bathe the dogs.

Ustedes quieren mucho a su mamá.
You guys love your mom very much.

To find a direct object in Spanish, you must ask “what?” or “whom?” to the verb.

Let me use the previous examples to show you how to find the direct object in Spanish.

Let’s do example #3 together. In this sentence, ‘ustedes’ is the subject, and ‘love’ is the action. To find the Spanish direct object, I would ask what or whom do you guys love? And the answer is: your mom!

Tip: Because of Spanish’s structure, direct objects are usually the element that is closer to the verb.

When & How to Use Direct Object Pronouns in Spanish

One of the key rules of direct object pronouns in Spanish is that when using third person pronouns (la, lo, and their plural forms), you must choose a pronoun that agrees with the gender and number of the noun they’re replacing. Check the examples below:

Dame la pelota, por favor.
Give me the ball, please.

Emma esperó a sus amigos.
Emma waited for her friends.

Dámela, por favor.
Give it to me, please.

¿Quién quiere probarlas?
Who wants to taste them?

Susie me vio con Alejandro.
Susie saw me with Alejandro.

Check the last example. This sentence uses the direct object pronouns without having an antecedent (a counterpart example with the direct object). However, we know we need a direct pronoun because it answers the question: what did Susie see? Me!

Ya la vi.
I already saw it.

¡No lo toquen!
Don’t touch it!

Te he comprado un suéter.
I bought you a sweater.

Romperlo no va a resolver nada.
Breaking it is not going to fix anything.

Progressive tenses (such as the Spanish present progressive) and verbal phrases (for example, the near future) are formed with a conjugated verb and a verb in gerund or infinitive form. So, with these types of tenses, you have two options: placing the pronoun before the conjugated verb or attach it to the infinitive or gerund:

Voy a comprarla.
I’m going to buy it.

La voy a comprar.
I’m going to buy it.

Estoy escuchándote.
I’m listening to you.

In Spanish, transitive verbs must always be followed by a direct object because the sentence would be incomplete without it.

Examples of some verbs in Spanish that work direct object pronouns include:

Take Note: Spanish reflexive verbs are transitive verbs. This means that if you’re not performing the action on yourself, you may use a direct object.

I’ve created a PDF with cheat sheets for you to download including the graphics from this guide so that you can refer to it whenever you need a refresher on how to use, place or identify direct object pronouns in Spanish.

Ahora que ya los entiendes (now that you understand them), it’s time for you to start applying these pronouns to your conversations. You can start practicing your use of direct object pronouns in Spanish by taking this quiz.