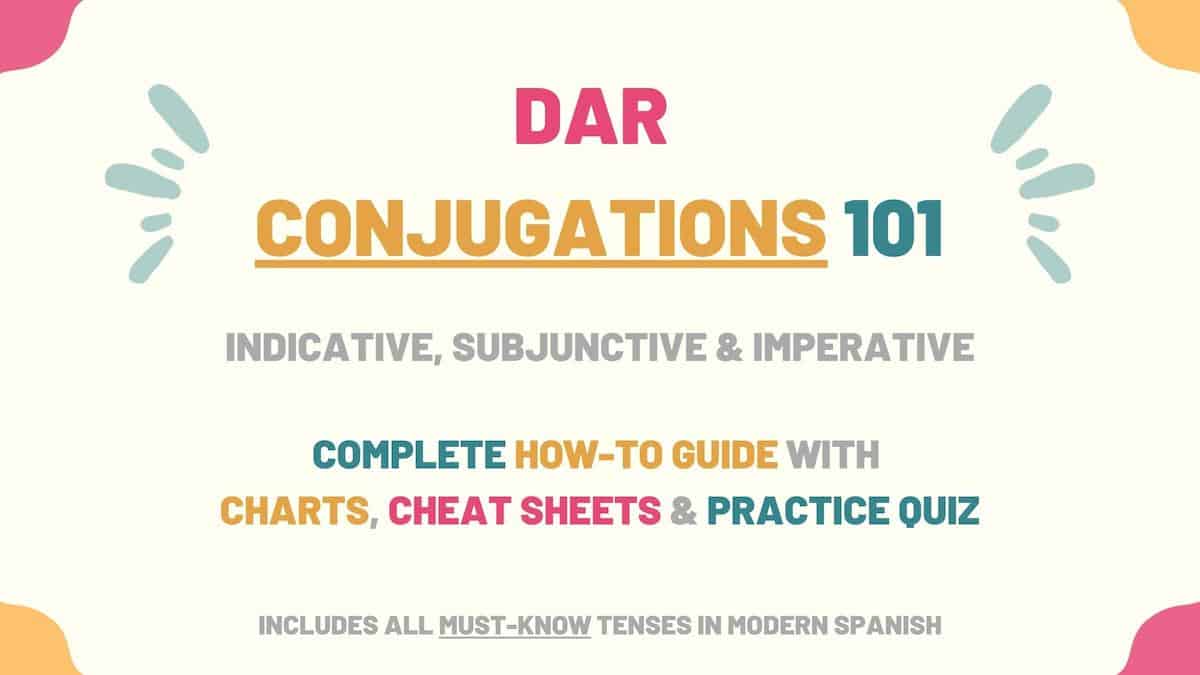 Dar is one of the most common verbs you’ll use in Spanish. Since this verb has many irregularities, in this guide, you’ll learn how to conjugate ‘dar’. On top of the conjugation charts (which you’ll find below), I’ve also included examples and some common uses of this verb.

Take Note: Dar is one of Spanish’s most common transitive verbs. Since a direct or indirect object must always follow it, dar usually works with direct and indirect object pronouns.

In the present tense, the yo and vosotros forms of ‘dar’ are irregular. In this tense, dar is used to talk about things you give to people or emotions that something provokes in you. Las arañas me dan miedo.

Take Note: Notice that -oy is the same ending you use to conjugate the verb ser in the first person singular (yo).

All the preterite forms of dar are irregular. The Spanish preterite refers to the objects you gave someone or the feelings that something provoked in you at a specific moment in the past. For example: mi mamá me dio este anillo.

The imperfect tense is used to talk about objects people used to give you or to describe the feelings something caused you repeatedly in the past. For example, mi abuela nos daba muchos dulces. The imperfect conjugation of ‘dar’ is regular and can be translated as ‘used to give’ or ‘gave’.

The near future in Spanish is used to talk about things you’ll give someone in the immediate future. This tense is formed with ir (present) + a + dar and can be translated as “going to give”.

The simple future allows you to express that you will give something to someone at some point in the future. For example, te daré más dinero en unos días.

The conditional form of ‘dar’ conveys that someone would give something to another or that a situation would provoke a feeling in a person if certain circumstances are met. For example: ver esta película me daría mucho miedo. This tense is conjugated by adding the conditional endings to ‘dar’.

To conjugate to the past perfect tense, you need to use the imperfect form of haber + dado, which is the past participle form of ‘dar’. The past perfect of ‘dar’ expresses that you gave something to someone before some other reference point in the past. Pensé que ya te había dado tu celular.

The future perfect of ‘dar’ is built by conjugating haber to the future tense and adding dado (the past participle of ‘dar’). In this tense, ‘dar’ communicates you will give something to someone by or before a certain time in the future.

In the present subjunctive, vosotros, yo, and él/ella have their own irregular conjugations, respectively. The present subjunctive of ‘dar’ is used to talk about the expectation or possibility of someone giving you something. For example: espero que tus amigos te den muchos regalos.

Take Note: Notice that the first and third-person singular forms (‘yo’, ‘él’, ‘ella’, and ‘usted’) have an acute accent. This accent is used to distinguish between the preposition de and the present subjunctive form of dar.

We use the imperfect subjunctive of ‘dar’ to talk about what would happen if we gave something to someone. ¿Qué harías si te dieran dos millones de pesos?

The past perfect subjunctive of ‘dar’ can be used to talk about what would have happened if you had given something to someone. These hypothetical situations can no longer happen because their time has passed. For example si le hubiera dado las llaves…(If I had given him the keys).

The affirmative imperative conjugation of dar is only irregular for the ‘usted’ form. The affirmative commands of dar command people to give something to someone. For instance: dame eso.

Since the Spanish negative imperative is based on the present subjunctive, dar is irregular when conjugating ‘usted’, ‘ustedes’, and ‘vosotros’. Negative commands allow you to order someone to not give something to another. For example: no le des dulces al bebé.

How to Use ‘Dar’ in Spanish

Now that you know all the conjugations of dar, you should check the sections below to check the uses of ‘dar’ in Spanish.

¿Me das una papa, por favor?
Can you give me a chip, please?

To describe the emotions or feelings something causes you:

De niña, me daban miedo las arañas.
When I was a kid, I used to be afraid of spiders.

Take Note: When referring to the feeling something causes you, dar follows the same conjugation pattern as ‘gustar’. Click here to learn more about verbs like ‘gustar’.

To talk about the subject a person teaches

Download the PDF containing all of dar’s conjugation tables, verb characteristics, and uses so you can study it at your own pace!

Take the dar conjugation quiz to practice your conjugation skills and see results for which tenses you’ve mastered and those that need work.