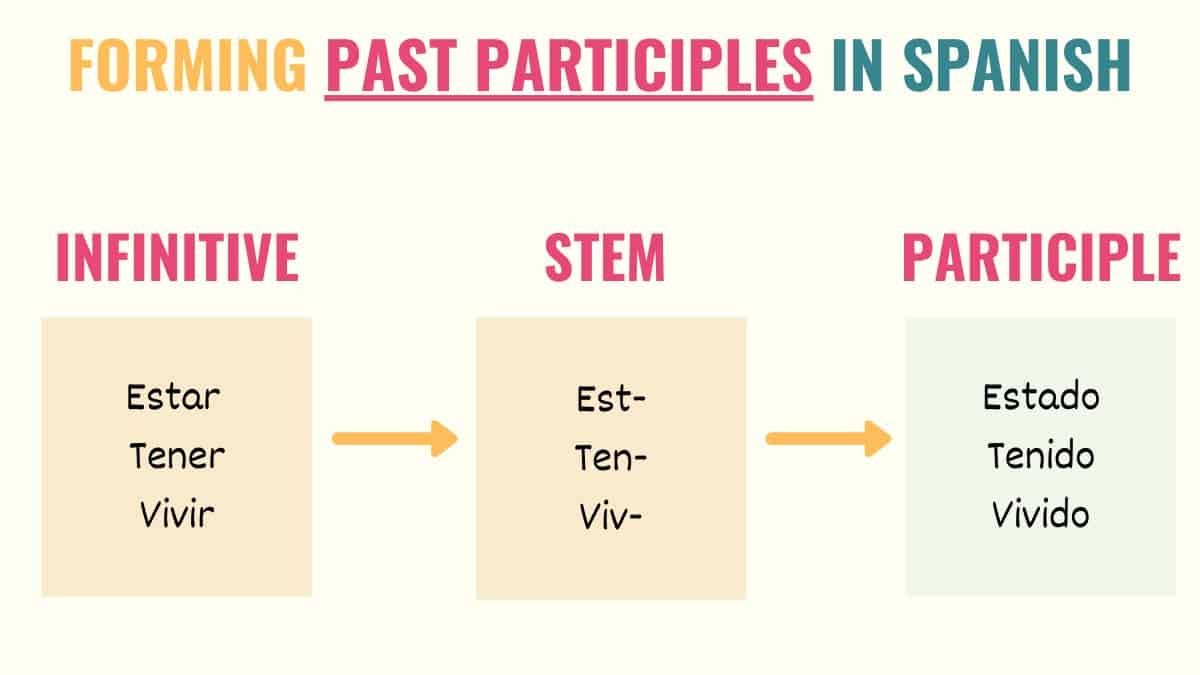 If you’re studying Spanish, at some point, you’ll need to learn participios pasados. Although this set of words has very important applications in our language, I find that a lot of students are not familiar with this topic. In fact, many of them still wonder what is a past participle in Spanish.

A Spanish past participle is a verbal form. Depending on the context, they can be used to:

Usually, Spanish past participle endings are  ‘-ado’ and ‘-ido’ which is the equivalent of English verbs ending in ‘-ed’ or ‘-ing’.

For many students, the past participle in Spanish is a challenging and confusing topic. But, like any other complicated Spanish grammar topic, el pasado participio not only is it very important, but we also use these words all the time (if only things were easier!).

To help you understand and master these words, in this guide, you’ll learn everything you need to know about past participle verbs in Spanish. In addition to the theory, I’ll include examples, phrase structures, and real contexts where you’ll apply these words.

By the end of this, you’ll know these words like the back of your hand!

What Are Past Participles in Spanish?

In Spanish, past participles (participios pasados) are verbal forms. This means that ‘participios’ are words that we form from a verb. Overall, you can identify these words by their endings: -ADO and -IDO.

Creo que los documentos fueron destruidos.
I believe that the files were destroyed.

If you check the previous examples, you’ll notice that Spanish participles are equivalent to English verbs that end in ‘-ed’ or ‘-ing’. Como habrás notado (as you may have noticed), these words have different uses and applications that we’ll discuss more in-depth in the following sections.

Take Note: Depending on the context, in Spanish, English words that have an ‘-ing’ ending can either be a past participle or a gerundio. Notice that Spanish gerunds allow you to talk about the actions that are taking place now, while participios help you describe people.

La película me está aburriendo.
The movie is boring me.

Forming the Past Participle in Spanish

Regular Past Participles in Spanish

When it comes to forming regular past participles, you need to identify the infinitive ending of the verb that you’re working with.

In Spanish, the endings for past participle are:

So, as you can see in the graphic above, once you remove the infinitive ending, you need to make sure you add the corresponding past participle ending to your stem.

Todavía no hemos hablado con tu hermana.
We haven’t talked to your sister.

Creo que no has comprendido lo que dije.
I think you haven’t understood what I said.

Check the examples above for a minute and try to find a pattern on the verb stems used. If you look closely, you’ll notice that all of our stems end with a consonant (‘habl’, ‘comprend’, ‘sub’, ‘perd’).

With some regular ‘-ER’ and ‘-IR’ verbs the stem will end with a vowel. In this case, you’ll need to add an accent mark to the Spanish past participle ending (-ído). Check the examples below to get a better understanding of this rule (stems are in italics).

He oído que esta película es muy buena.
I have heard that this movie is pretty good.

No he leído ese libro, ¿está bueno?
I haven’t read that book, is it good?

¿Has traído los papeles?
Have you brought the papers?

Take Note: Although their stem also ends with a vowel, this accent rule is not applied to ‘huir’, ‘destruir’ or ‘construir’.

Irregular past participle in Spanish

Below there is a list of some of the most common Spanish irregular past participles. Since

they don’t follow a clear pattern, you’ll need to learn them by heart.

Take Note: This irregularity is applied to verbs whose prefix is formed with a verb from this list. Some examples include, descomponer, describir, deshacer, devolver, satisfacer etc.

Laura no está satisfecha con mi trabajo.
Laura is not satisfied with my work.

No habíamos previsto este problema.
We hadn’t foreseen this issue.

Past Participle and Pronoun Placement in Spanish

If the verb that you need to transform into a participio pasado is a reflexive verb or it requires you to work with object pronouns, you need to make sure that you include that pronoun. In this case, pronouns are placed before the first verb which in most cases will be ‘haber’.

Here is a phrase structure that shows you where and how to place pronouns when working with past participles in Spanish.

La película me ha gustado mucho.
I liked the movie very much.

No sé cómo está Mandy, ya no la he vuelto a ver.
I don’t know how Mandy is, I haven’t seen her again.

How to Use Past Participle in Spanish

As established before, past participles in Spanish have 3 main uses:

In the sections below, you’ll find more information about when to apply these uses as well as some examples of how participios pasados can help you create these meanings.

Past participle and perfect tenses in Spanish

One of the most common uses of Spanish past participles is conjugating perfect tenses (such as the present perfect). As you may already know, to create these tenses, in addition to a past participle verb, you’ll need to work with the verb haber.

When it comes to these structures, there are some rules that you need to keep in mind. For starters, haber can be conjugated in any tense that you need. In this case, the past participle doesn’t agree with the gender and number of the subject because it’s not working as an adjective.

So, in short, ‘haber’ helps you express who performs the action and when it took place. Spanish past participles describe what action was performed. Notice that these words are always placed after the conjugated verb.

Mamá, ¿has visto mi cartera?
Mom, have you seen my wallet?

Si me hubieras dicho, te habría ayudado.
If you had told me, I’d have helped you.

¿No has conocido a la chica nueva?
Have you met the new girl?

Spanish past participles as adjectives

Past participles in Spanish are also used to describe people or objects. Usually, when working as adjectives, these words are used to talk about someone’s personality or temporary physical and emotional states.

As adjectives, past particles need to agree in number and gender with the object or person that they’re describing. In other words, with this meaning, they have plural and feminine forms. And since you’re describing something, you can use adverbs to intensify the qualities that you’re talking about.

Here are some verbs that you can use with past participles adjectives in Spanish:

La tienda sigue cerrada, tal vez ya no van a regresar.
The store is still closed, maybe they won’t go back today.

Related Resource: How to Describe Someone in Spanish

Passive voice and past participle in Spanish

As mentioned earlier in this article, Spanish past participles are used to build the passive voice and, in this context, they always work with the verb ‘ser’. Here are some examples of how to use these words with the passive voice.

El glaseado fue hecho por mi mamá.
The frosting was made by my mom.

Notice that, in this situation, the past participle also needs to agree with the direct object. Again, these types of sentences are only suitable in very formal conversations. So if you don’t want to sound too fancy, don’t use them with your friends.

Past participles in Spanish are words that are based on verbs and that can be used for different purposes. Since they’re so useful and common in Spanish, in this guide, we learned the uses and the rules to apply past participles in our conversations.

Given that this topic can be quite challenging, here are some quick key points to keep in mind:

Hopefully, now has entendido (you have understood) what past participle in Spanish and how you can use them! To check that you don’t have any doubts, you should take this quiz to practice this topic.

Related Resources:
Difference Between ‘Haber’ & ‘Tener’ in Spanish
A Guide to Present Perfect
Practice Past Participles in Spanish