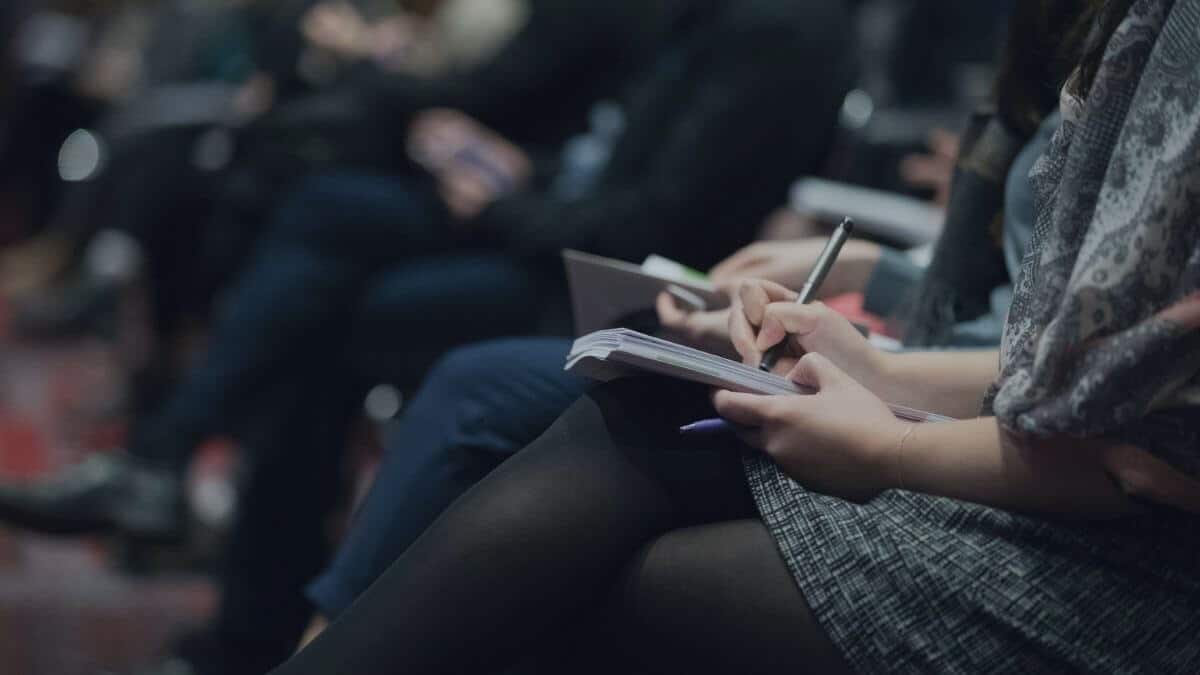 In this short guide, we will cover the following topics for ‘asistir’ in Spanish:

What does ‘Asistir’ mean?

Definition – ‘Asistir’ means to be present or to attend a certain event or place as a spectator, guest, or participant. It is also used as a way to express that a person is providing help or aid to someone else. ‘Asistir’ is more commonly translated as ‘to assist’ or ‘to attend’.

Here are some definitions that will show you in which situations you can use ‘asistir’ in Spanish.

In Spanish, ‘asistir’ is a regular verb. So, to conjugate most tenses, you’ll eliminate the -IR ending from the infinitive and use the stem ‘asist’. In the conjugations charts below, you’ll find the proper endings for each tense and subject.

The future and conditional tenses, use the infinitive form ‘asistir’ and, then, depending on the subject that you want to conjugate, add the corresponding endings.

Andrea y yo estamos asistiendo a la escuela en la tarde.
Andrea and I are attending school in the afternoon.

Mi vecina estará asistiendo en el hospital esta semana.
This week, my neighbor will be helping in the hospital.

Si vas a este partido, habrás asistido a todos los partidos del mes.
If you go to this game, you’ll have attended all the games for this month.

Hubiera sido mejor que no hubiéramos asistido a la boda de Mayra.
It would’ve been better if we had gone to Mayra’s wedding.

Notice that, in order to create the Spanish imperative, tú uses the present tense conjugation and simply removes the ‘s’ from the end of the word. For the rest of the subjects, I’ve underlined the imperative endings for ‘-IR’ verbs.

Here is an example of how to build the negative imperative:

No asistas a ese evento, puede ser peligroso durante la pandemia.
Do not attend this event, it can be dangerous during the pandemic.

How to Use ‘Asistir’ in Spanish with Examples

There are two main uses of the verb ‘asistir’ in Spanish:

Below are some examples that will help you understand the structure of the sentences built with the verb asistir. I’ll also provide you with phrase structures so you know how you can apply each meaning to your conversations.

To say that someone is present in a place or event

In Spanish, the verb ‘asistir’ is used when we are talking about someone attending or being present in a place or event. As a result, in this context, ‘asistir’ is translated as ‘to attend’ or ‘to go to’.

No asistimos a la boda de Sergio porque estuvimos fuera de la ciudad.
We did not attend Sergio’s wedding because we were out of town.

Asistiría a la fiesta, pero estoy enfermo.
I would attend the party, but I am sick.

To help or take care of someone

Depending on the context and structure of the sentence, ‘asistir’ in Spanish is also used to describe that a person is helping someone or with something. It can also mean ‘to aid’, ‘to help’, or ‘to take care of’ someone or a situation.

Notice that in this situation you may need to use some object pronouns.

Señorita, ¿necesita que la asista con su aplicación?
Miss, do you need me to assist you with your application?

Take Note: This verb is also used in sports or card games. In the first one, when talking about football (soccer), basketball or hockey, it means to send a pass for a score. If talking about certain card games, it means to lay cards of the same suit as that of the card played first.

Synonyms of ‘Asistir’ in Spanish

Acudir: This verb is used if a person goes to a place on his or her own initiative or because he or she has been called. It is translated as ‘to go’ or ‘to attend’.

Presentarse: If we want to say that someone showed up to a place, we can use this verb instead of ‘asistir’. It is translated as ‘to be present’, ‘to appear’ or ‘to show up’.

Ir: Translated as ‘to go’, ‘ir’ is an informal way to say that someone will attend a certain place or event.

Ayudar: ayudar describes that someone offers to provide help or a service to help others. As a result, it can be a synonym of ‘asistir’. ‘Ayudar is the direct translation of ‘to help’.
Atender: when talking about helping someone or looking after someone or something, this verb can be used instead of ‘asistir’. It is translated as ‘to attend to’ ‘to take care of’.