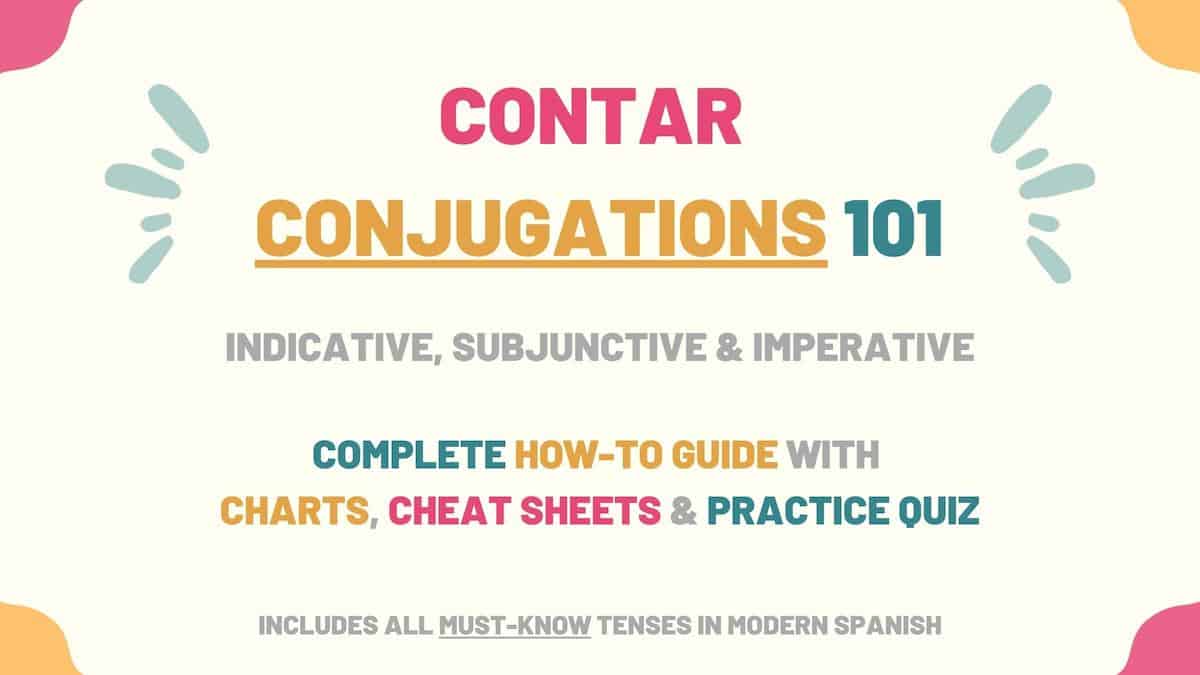 Contar is one of the most common stem-changing verbs in Spanish. For that reason, in this guide, you’ll learn the most important conjugations for contar and some of its basic uses.

Here’s a quick overview of what you’ll learn:

Take Note: Notice that when referring to numbers or amounts, contar means ‘to count’. For simplicity and so that this isn’t overly repetitive, each of the tenses will only show translations with the meaning of ‘to tell’.

The present tense of contar has stem changes. In other words, ‘contar’ is a stem-changing verb for all pronouns, except ‘nosotros’ and ‘ustedes’. As a result, most subject pronouns follow a O to UE change.

All the preterite forms of ‘contar’ are regular. The Spanish preterite expresses that you told or counted something at a specific moment in the past. For example: le conté a Daniela.

The Spanish imperfect tense is used to talk about things you used to tell or count repeatedly in the past. For example, yo contaba muchos chistes. The imperfect conjugation of ‘contar’ is regular and can be translated as ‘used to tell’ or ‘told’.

The near future in Spanish is used to talk about things you’ll tell or count in the immediate future. This tense is formed with ir (present) + a + contar and can be translated as “going to tell”.

The simple future allows you to express that you will tell or count something at some point in the future. For example, algún día te contaré cómo conocí a tu papá.

The conditional form of ‘contar’ conveys that someone would tell or count something if certain circumstances are met. For example: te contaría, pero no tengo tiempo. This tense is conjugated by adding the conditional endings to ‘contar’.

To conjugate to the past perfect tense, you need to use the imperfect form of haber + contado, which is the past participle form of ‘contar’. The past perfect of ‘contar’ expresses that you told or counted something before some other reference point in the past. Cuando llegué, Sandra ya te había contado.

‘Contar’ conjugated to the conditional perfect is used to talk about things you would have told someone if a past condition was met. For example: si hubiera sabido, te habría contado.

The progressive tenses in Spanish refer to actions that are in progress at the moment of speaking. Using ‘contar’, it expresses that someone is telling something right now. The structure to form these tenses is estar (conjugated) + gerund form of contar (contando).

The Spanish subjunctive mood is used to talk about wishes, hypothetical actions or express uncertainty.

We use the imperfect subjunctive of ‘contar’ to talk about what would happen if we told something to someone. This tense expresses wishes or hypothetical situations that are difficult to accomplish. Juan se enojaría conmigo si le contara lo que hice.

The past perfect subjunctive of ‘contar’ can be used to talk about what would have happened if you had told something to someone. These are hypothetical situations that can no longer happen because their time has passed. For example si le hubiera contado…(If I had told him).

‘Contar’ affirmative commands have a stem-changing form for ‘tú’, ‘usted’ and ‘ustedes’. Like the present indicative and subjunctive, these pronouns have a change from O to UE. The affirmative imperative of contar allows you to order or ask someone to tell you something. Cuéntame qué pasó.

Now that you’ve seen all the conjugation charts of contar, you should learn its meanings as well as how and when to use this verb.

¿Por qué le has contado?
Why have you told him?

I’ve created a PDF for you to download containing all Contar’s conjugation tables, verb characteristics, and uses so you can study it at your own pace!

Take our ‘contar’ conjugation quiz to test your skills and practice this stem-changing verb in all its tenses. You can customize your quiz based on mood, your Spanish level, and more.