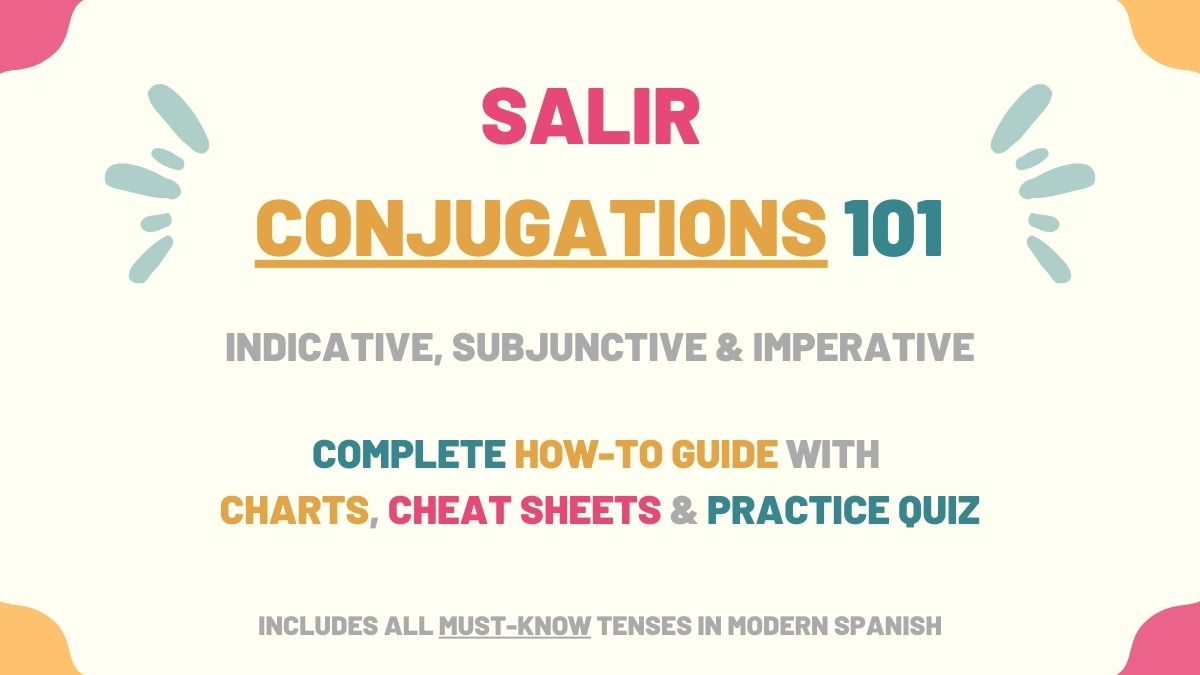 ‘Salir’ is one of the most common -IR verbs that you’ll use in Spanish. For that reason, this guide contains all the conjugations of salir. On top of providing you with conjugation charts, I’ve also included some examples of how to use this verb. Here is an overview of the topics you’ll learn:

Take Note: Salir is the direct translation of ‘to leave’ or ‘to get out’. However, this verb can have additional meanings depending on the sentence and context.

In the present tense, salir is irregular only in the ‘yo’ form. In other words, the form yo is conjugated with the stem ‘salg-’. In this tense, salir can be used to talk about the time someone leaves a place. For example, Cindy sale a las 8.

The Spanish preterite expresses that you left a place or went out with someone at a specific moment in the past. For instance, el sábado salí con Mindy.

The near future in Spanish is used to talk about people you’re going out with or places you’ll leave in the immediate future. This tense is formed with ir (present) + a + salir and can be translated as “going to leave”.

All the future tense forms of ‘salir’ are irregular. To conjugate this tense, you must add the future endings to the irregular stem ‘saldr-’. The simple future allows you to express that you will go out with someone or leave a place at some point in the future. For example, creo que saldremos el lunes.

Salir in the conditional tense is irregular. This tense is formed with the stem ‘saldr-’. The conditional of ‘salir’ conveys that someone would go out with another person or would leave a place if certain circumstances are met. For example: si fueras más amable, saldría contigo.

To form the Spanish present perfect, you should use the formula haber (present) + salido. In the present perfect tense, salir is used to talk about leaving a place or going out with someone in a moment close to the present. For example, todavía no he salido de la oficina.

To conjugate to the past perfect tense, you need to use the imperfect form of haber + salido, which is the past participle form of ‘salir’. The past perfect of ‘salir’ expresses that you left or went out with someone before some other reference point in the past. Cuando llegué, Sandra todavía no había salido.

Haber in future form + past participle of salir is the formula to conjugate the future perfect. With this tense, ‘salir’ communicates you will leave by or before a certain time in the future.

‘Salir’ conjugated to the conditional perfect communicates that would have left somewhere or would have gone out with someone if a past condition was met. For example, si hubiera podido, habría salido más temprano.

The Spanish progressive tenses describe actions in progress. The progressive forms of salir are formed with estar (conjugated) + present participle of salir (saliendo).

In Spanish, the subjunctive is used to talk about wishes, hypothetical situations or express uncertainty. The conjugation charts below show the subjunctive forms of salir.

We use the imperfect subjunctive of ‘salir’ to talk about what would happen if we left a place or went out with someone. This tense expresses wishes or hypothetical situations that are difficult to accomplish. Me gustaría que salieras conmigo.

The past perfect subjunctive of ‘salir’ is used to talk about hypothetical situations in the past. In other words, things that can no longer happen because their time has passed. For example si hubiera salido temprano…(If I had left early).

With the exception of ‘vosotros’, the affirmative commands of salir are irregular. The affirmative command of ‘tú’ is sal, ‘usted’ and ‘ustedes’ use the present subjunctive conjugations of ‘salir’. The imperative of salir can be used to ask people to leave a place. Salga de la oficina, señora.

Salir negative commands use the present subjunctive conjugations. This means that both formal and informal commands of salir are irregular. The negative imperative of salir is used to command people to not tell something to someone. For instance: no salgas con ella.

Now that you’ve studied the conjugation charts of ‘salir’, it’s time to learn how to use this verb. Although ‘salir’ means ‘to leave’, it has other applications:

¡Sal de mi cuarto!
Get out of my room!

I’ve created a PDF for you to download containing all of the conjugation tables, characteristics, and uses of salir so you can study it at your own pace!

Practice your ‘salir’ conjugation skills by taking the verb conjugation quiz! Choose any combination of tenses and whether or not you want to practice Latin American or Castilian Spanish.