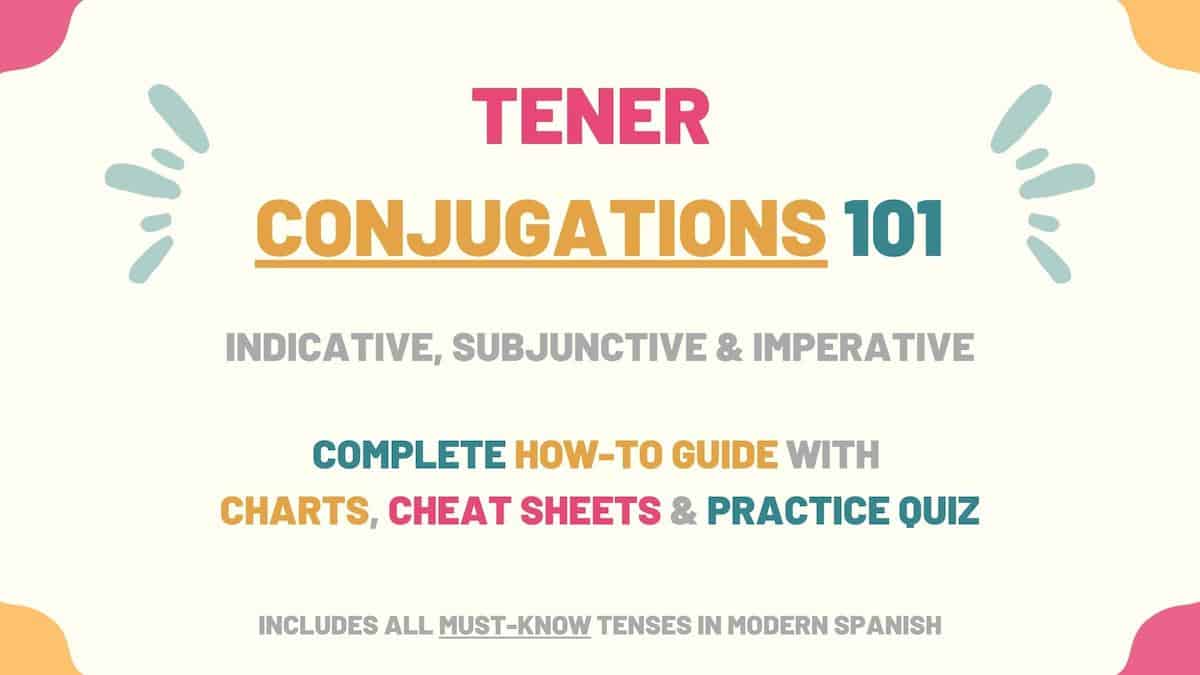 Take Note: Although tener is the direct translation of ‘to have’, this verb is not used to form perfect tenses. To build these tenses, you must use the verb haber instead. If you want to learn more about these verbs, you should check my article on tener vs haber.

The present form of ‘tener’ has stem-changes from E to IE. These spelling changes are not applicable to ‘nosotros’, ‘vosotros’ and ‘yo’. ‘Nosotros’ and ‘vosotros’ follow a regular conjugation.

However, the yo form of ‘tener’ is irregular. For this subject, you’ll use the stem ‘teng-’.  In the present tense, this verb is used to say your age or to talk about obligations or possessions. For instance: yo tengo dos perros.

‘Tener’ in the preterite form is irregular. To conjugate this tense, you must use the stem ‘tuv’. The preterite of ‘tener’ is used to talk about things you owned or obligations you performed in the past. Here is an example: tuve que limpiar mi cuarto.

In the imperfect tense, ‘tener’ is regular. The imperfect form of ‘tener’ is used to say people’s age and talk about possession in the past. For example: en 1991, Sharon tenía diez años.

With tener, the near future is used to talk about things you’ll own or must do in the immediate future. This tense is formed with ir (present) + a + tener and can be translated as “going to have”. Este fin de semana vamos a tener una fiesta.

‘Tener’ in the future tense has an irregular conjugation. To build this form, you must use the stem tendr and add the future endings. The simple future allows you to talk about the age, obligations or things you’ll have at some point in the future. Esta semana no tendré tiempo.

Like the future, ‘tener’ in the conditional tense is formed with the stem tendr. The conditional form of ‘tener’ communicates that someone would must do or would own something if certain conditions are met. Si me ayudas, tendría más tiempo.

Tener in the present perfect is formed with the verb ‘haber’ and the participle form of ‘tener’ (tenido). This tense is used to talk about the things someone owned in a moment close to the present. For instance, esta semana no he tenido tiempo.

To conjugate ‘tener’ to the past perfect tense, you need to use the imperfect form of haber

and tenido, which is the past participle form of ‘tener’. The past perfect of this verb expresses that you had to do or owned something before some other reference point in the past. Hasta ahora nunca habíamos tenido un gato.

The conditional perfect of ‘tener’ describes obligations you would have done or things you would have owned if a past circumstance was met. This tense is formed by conjugating ‘haber’ to the conditional tense and adding the past participle tenido. For example: habría tenido más tiempo si me hubieras ayudado.

The progressive tenses in Spanish refer to actions that are in progress at the moment of speaking. The progressive forms of ‘tener’ communicate what someone is having right now. The structure to form these tenses is estar (conjugated) + gerund form of tener (teniendo).

The past perfect subjunctive of ‘tener’ can be used to talk about what would have happened if you had owned something. These are hypothetical situations that can no longer happen because their time has passed. For example si hubiera tenido…(If I had had).

The Spanish imperative allows you to give affirmative and negative commands, in other words, telling people what to do or not to do.

To form affirmative commands with ‘tener’, you’ll use the stems ‘ten’ (for ‘tú’ and ‘vosotros’) and the present subjunctive (teng) stem for the rest of the subject pronouns. The affirmative imperative of tener is used to command someone to have or own something. ¡Tengan paciencia!

Now that you know how to conjugate ‘tener’ in all tenses, it’s time for you to check its different applications. In addition to the meanings, I’ll include some sentences using ‘tener’ so you understand how to apply this verb.

Si no hubiera terminado, habría tenido que venir el lunes.
If I hadn’t finished, I would have had to come on Monday.

En un año, ustedes tendrán dos hijos.
In one year, you will have two kids.

Hace tiempo tuve un par de gatitos.
A while ago, I had a couple of kittens.

Ayer tuve fiebre.
I had a fever yesterday.

He tenido dolor de cabeza todo el día.
I have had a headache all day.

Memorizing all of these tenses for conjugating tener along with all of the verb’s stem changes and irregularities takes time. I’ve created a PDF for you to download containing all of the conjugation tables, verb characteristics, and uses so you can study it at your own pace!

Now that you’ve learned all of these tenses, it’s time to put them into practice. Take the tener conjugation quiz to boost your conjugation skills and get instant feedback on which tenses you’ve mastered and those that need work.