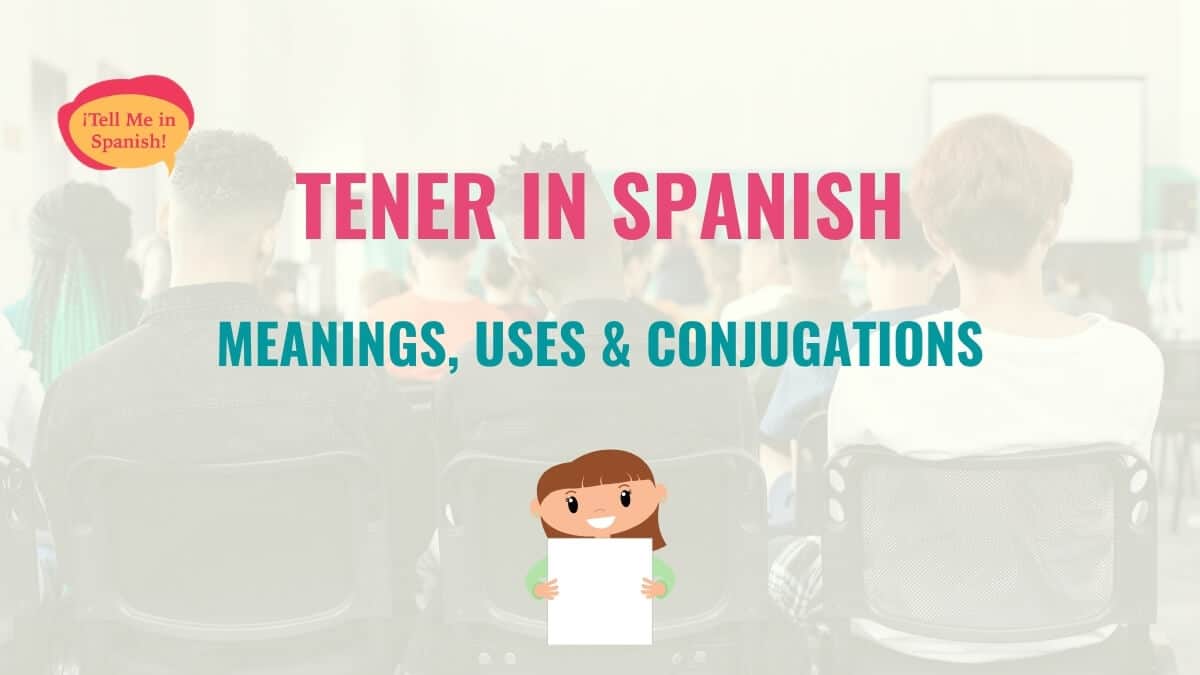 In this short guide, we will cover the following topics for ‘tener’ in Spanish:

What does ‘tener’ mean?

Definition – ‘Tener’ means to have, possess, own or hold. It is used when expressing or talking about possession, obligation, age, feelings or physical conditions. It is most commonly used and translated as ‘to have’.

‘Tener’ has multiple meanings and definitions in Spanish, depending on the context and situation. Below there are the definitions along with their corresponding translations in English:

In Spanish, ‘tener’ is an irregular verb. This means that in all tenses, with the exception of imperfect, the stem of tener changes as shown below by the graphic.

Below there is a conjugation chart for ‘tener’ with the most commonly used tenses.

The stem change for ‘yo’ becomes ‘teng’. The stem for ‘nosotros’ is ten while for the rest of the subject pronouns you will use tien.

In this case, the verb changes its stem to tuv. In order to conjugate it correctly, you need to add the proper endings for each person.

In the imperfect tense, the verb ‘tener’ is not irregular. To conjugate it, you just need to replace -er with the proper ending for each person.

Just like the future, tendr is the stem that you use to conjugate tener in the conditional tense. This stem works for all the subjects, just make sure to use the proper ending.

Tener in present progressive requires you to use its gerund form ‘teniendo’. Note that gerunds remain the same no matter the tense and person that you’re using in your conjugation.

Tenido is the participle form of ‘tener’. This word is used to conjugate present tenses (such as present perfect).

Subjunctive is a more advanced, but yet popular Spanish mood. As an irregular verb, tener changes its stem when conjugated in the subjunctive. In this case, you need to use the stem teng and add the proper ending (underlined in the table below).

To conjugate tener in imperfect subjunctive, you need to use the preterit stem (tuv) and add the corresponding endings for each person. Notice that, in this case, there are two conjugations: -iera endings (tuviera) are more common in Latin American Spanish speaking countries, while -iese (tuviese) is more common in Castilian Spanish

For ‘ustedes’ and ‘nosotros’, you need to use the same stem that you would use for conjugating in subjunctive (teng). However, this is not applicable for ‘tú’.

Take Note: For negative imperative, tú follows the present subjunctive conjugation (tengas). Like any other Spanish negative sentence, you just need to add the word No before the verb.

No tengas miedo
Don’t be afraid

How to Use ‘Tener’ in Spanish with Examples

There are four main uses for the verb ‘tener’ in spanish:

We’ll go into more detail and depth about each of these uses below and help you apply these to your daily conversations with sentence structures you can use and examples to practice.

Tener is often used to talk about possession and ownership of things.

As the direct translation of to have, in Spanish, ‘tener’ is used to talk about the objects that people own. In addition to properties and objects, when talking about possession in Spanish, you can also refer to family and personal relationships.

Cuando era niña, yo no tenía mascotas
When I was a kid, I didn’t have any pets

In Spanish, tener is the verb that we use to talk about or ask questions about someone or something’s age. In order to do this, you just need to conjugate the verb and add the number that reflects the age that you’re talking about. You can use the following phrase structure and examples as a starting point:

Using ‘tener’ to talk about obligations and duties

When working with other verbs (in infinitive form), tener expresses that a person has the duty or obligation to do something. In this case, there is a special structure that you need to follow. Check the examples below:

Ya no hay leche, mañana tendremos que comprar
There’s no milk, tomorrow we’ll have to buy

In Spanish, ‘tener’ is also used to talk about certain feelings or physical sensations (usually related to medical symptoms). Some adjectives that you can use for this purpose include:

¿A qué hora vamos a comer? Tenemos hambre
What time are we eating? We’re hungry

In Spanish, there are many idioms and expressions that use the verb tener and that can help you increase your vocabulary. Some of the most common include:

Tener en cuenta:  This expression is used to ask or let people know that they need to consider some factors or information before taking action. As a result, tener en cuenta can be translated as ‘to keep in mind’ or ‘to take into account’. It can be used in both formal and informal contexts.

Tener ganas de: In Spanish, tener ganas is an idiomatic expression that people use to express that they want or they feel like doing a certain activity. It can also be used to talk about cravings. Depending on the context, ‘tener ganas’ can be translated as ‘to feel like’, ‘to crave’.

Tener sentido: It’s the direct translation of to make sense. Therefore, we use this phrase to express whether something is logical or not.

Tener claro: This idiom is used to express that a person understands something or that, in a certain situation, things are clear. It can be translated as ‘to be clear’ or ‘to understand’.

Tener ángel: We use this expression to describe a charming and graceful person. It means to be charming.

Synonyms of ‘Tener’ in Spanish

Poseer: In Spanish, poseer is a standard and formal verb that people use to talk about possession. In this context, it’s a formal variation of ‘tener’. As a result, ‘poseer’ can be translated as to have, to own or to possess.

Ser dueño: It means to own. It can be used instead of ‘tener’ when talking about property or owing objects. We don’t use it to talk about relationships.

Deber: Depending on the context, in Spanish, deber expresses obligation and duty. In this case, it’s a synonym of ‘tener’. Deber is also used to express that a person has a debt. It can also imply that a certain action or event should have taken place. It means ‘to must’, ‘to should’ and ‘to owe’.