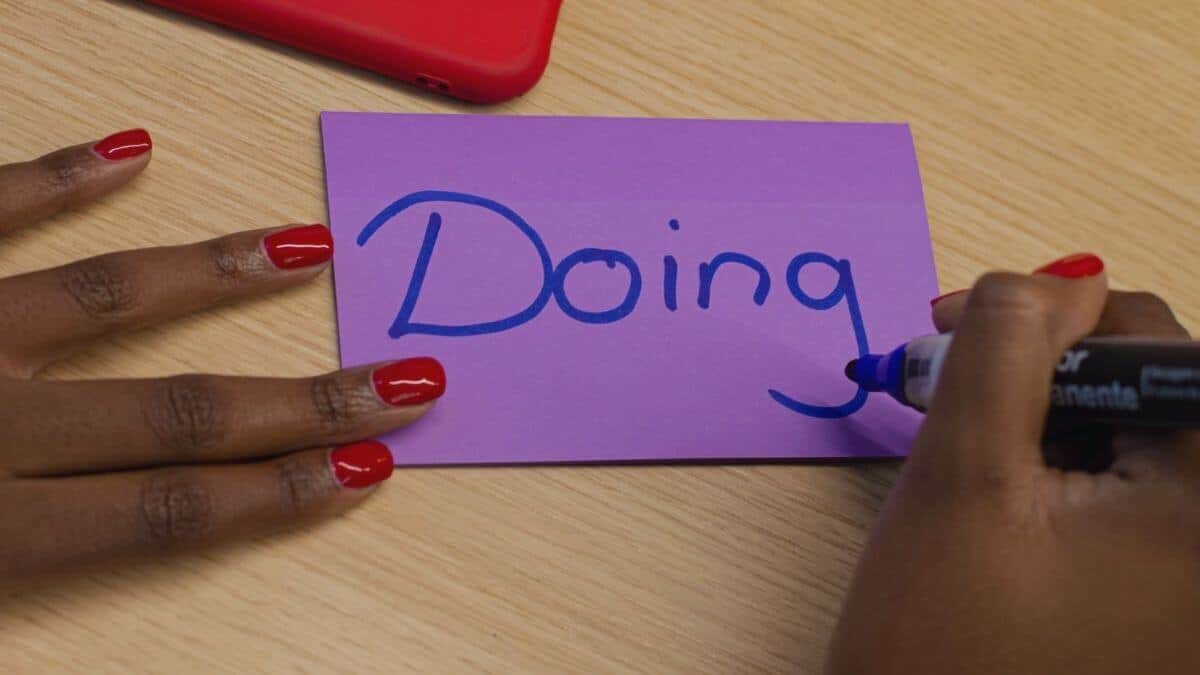 When learning to conjugate in Spanish, most people focus on the present, past, and future tenses and seem to forget about gerundio. Since they may not be very familiar with this topic, many people wonder what does gerundio mean in Spanish and what do we use it for.

In Spanish, gerundio is a verb form that indicates that an action is taking place at the moment of speaking. Spanish gerunds are the equivalent of –ing English verbs. Depending on the type of verb, gerunds in Spanish can have different endings:

Gerunds in Spanish are more common than you think and can help you communicate your ideas in a more precise way. For that reason, in this guide, I’ll show you what ‘gerundios’ are, how to form them and when to use them.

I’ll also provide you with examples and formulas so you know how to use these words in your conversations. By the end of this, gerundios will no longer be a problem for you.

What Are Gerundios in Spanish?

Spanish gerunds are verbs forms that we use to create compound tenses such as the present progressive. When using these words, we imply that the action is continuous or, to put it in simple words, that it’s (still) taking place at the moment of speaking.

Something to keep in mind is that gerundios are impersonal. This means that gerunds always have the same conjugation no matter what subject pronoun you’re using. Gerunds in Spanish are the equivalent of English verbs that ending on -ing. Check these examples:

Niños, ¿qué están comiendo?
Kids, what are you eating?

If you pay attention to the examples above, you’ll see that we only conjugate the first verb and the gerund stays the same. Just like in English, in Spanish, there are only a few verbs that work with gerundios.

In order to form Spanish gerunds, you need to identify the type of verb that you’re working with. Just like any other tense, some verbs have irregularities in their gerund form, so we will explore both below.

So, just like any other conjugation, regular gerund endings vary depending on the infinitive ending of your verb.

So after you remove the infinitive ending of the verb (-AR, -ER-, -IR), you’ll simply add the corresponding ending to form your gerund.

Take Note: If the verb that you want to transform into a gerund needs an object pronoun or a reflexive pronoun, you’ll need to include those pronouns into the gerund. To do this you can either attach the pronoun at the end of the gerund or place it before the conjugated verb.

Below is a list of some common irregular gerunds that you need to know. If you look at this first table, you’ll see that all gerunds are formed with the ending ‘yendo’. We do this with verbs that have a vowel immediately before the -AR, -ER or -IR ending (leer, creer, oír).

Here are some examples of this type of verbs:

How to use Gerundio in Spanish

Many students feel that Spanish gerunds are a challenging topic to learn. However, since they’re used to talk about continuous or progressive actions, gerunds are only used with a small list of verbs and contexts.

The most common Spanish verbs that are followed by gerunds include:

If you learn the verbs above and the situations where you need to apply them, you’ll have mastered gerundios.

Estar + gerund is used to create the Spanish present progressive tense. In other words, this combination allows us to talk about actions that are occurring at the moment of speaking:

Notice that if you conjugate the verb ‘estar’ in past tense, you’re expressing that your action was taking place at a specific moment in the past. In the previous examples, that moment will be all day and when it started to rain.

Remember that ‘andar’ is an informal synonym of ‘estar’. So, when building the Spanish present progressive, you can use ‘andar’ instead of ‘estar’.

¿Andas trabajando o estás libre?
Are you working or are you free?

In Spanish, we use seguir + gerund to emphasize that someone is still doing something. This structure expresses that an action or event that started at some point in the past is still being performed.

If you want to express for how long someone has performed an action, you’ll need to use the structure llevar + gerund. Notice that, in this context, you need to provide the amount of time you’ve performed the action. This information can be placed before or after the gerund.

Take Note: Notice that ‘llevar’ in the context of progressive tenses, is translated as “to have been”.

When not to use gerund in Spanish?

Even though gerundios are the equivalent of English words that end on -ing, in Spanish, gerunds are never used as nouns. In other words, Spanish gerunds are only used to refer to actions. If in English a gerund is used as a noun, in Spanish, you would need to use a verb in the infinitive form.

As mentioned above, in Spanish, we don’t use gerunds to name things or activities (nouns). In fact, we only use these words when referring to the action that we or someone else is performing. Check these examples so you understand this better:

Corriendo es bueno para tu salud. Running is good for your health. Me gusta viajando en verano. I like traveling during the summer.

Notice in this example above that ‘running’ and ‘traveling’ are not referring to an active action that someone is performing: no one is running or traveling here. In fact, in this context, these words are naming activities. So, in this case, in Spanish we wouldn’t use gerunds, but rather infinitive verbs:

Me gusta viajar en verano.
I like traveling during the summer.

Below are some examples of how would you use these gerunds properly in Spanish:

Marco y yo estamos corriendo los jueves. Marco and I are running every Thursday. Estaré viajando a Cuba en dos semanas. I’ll be traveling to Cuba in two weeks.

What is the difference between a gerund and a past participle in Spanish?

Past participles and gerunds are usually confused by Spanish learners since in some context they can both be translated as an -ing word. But, as mentioned before, we use gerunds to talk about actions that are happening (or still happening) at the moment of speaking. Notice that the endings for gerunds are -ando or -iendo.

Mi cuñada está comprándole un regalo a mi hermano.
My sister-in-law is buying a gift for my brother.

On the other hand, Spanish past participles are also used to conjugate past compound tenses such as the present perfect. As a result, past participles express that an action was already finished in the past.

Depending on the context, these words can also be used as adjectives. If this is the case, unlike gerunds, you’ll need to customize the past participle to match the gender and the number of the person you’re referring to.

Mamá, ¿has encontrado tu bolsa?
Mom, did you find your bag?

Gerundios are very useful in Spanish since they allow you to create progressive tenses that help you better express when an action is taking place. For that reason, in this article, I explained to you what these words are and how to use them.

Here are some key pieces of information to kept in mind:

Hopefully, now you have a better understanding of how to use gerunds in Spanish. Si quieres seguir practicando, I encourage you to take this Spanish gerund practice quiz! Good luck!