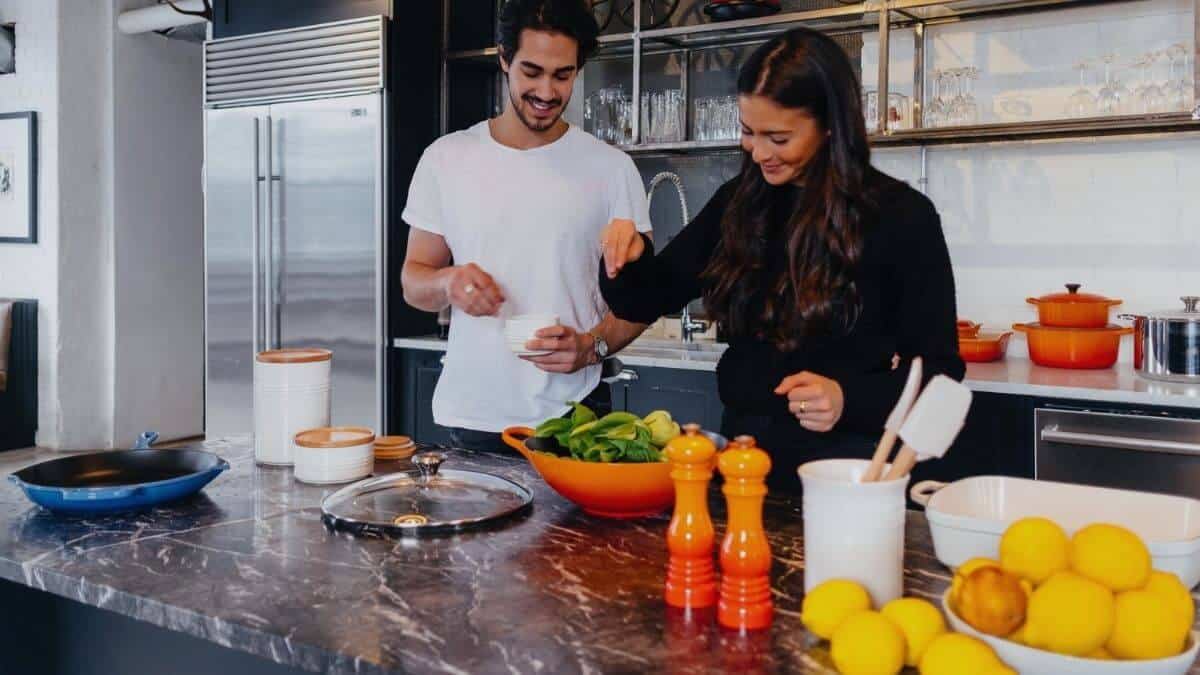 In this short guide, we will cover the following topics for ‘cocinar’ in Spanish:

What does ‘Cocinar’ mean?

Definition – In Spanish, ‘cocinar’ means ‘to cook‘ or ‘to prepare food‘. As a result, we use this verb to describe that a person is cooking or preparing a meal.

In Spanish, cocinar is a regular verb. So, in order to conjugate it, you’ll remove the -AR ending and add the appropriate endings to the stem ‘cocin’. Notice that the future and conditional tenses are conjugated by using the whole verb in its infinitive form rather than the stem.

Cuando me fui, mi mamá todavía estaba cocinando.
When I left, my mom was still cooking.

Si no te ayudamos, estarás cocinando por horas.
If we don’t help you, you will be cooking for hours.

Oye, pensé que ya habías cocinado el pollo.
Hey, I thought that you had already cooked the chicken.

If you notice, to give negative commands you need to conjugate ‘cocinar’ to the present subjunctive. To make your sentence negative, remember to add No.

No cocines el sábado, iremos a comer a un restaurante.
Do not cook on Saturday, we’ll go to a restaurant for lunch.

How to Use ‘Cocinar’ in Spanish with Examples

In Spanish, ‘cocinar’ is mainly used to talk about cooking or preparing food. Below is a clear definition that will help you understand this verb. Read the examples carefully and learn how to use it in your conversations.

Talking about cooking or preparing food

As the direct translation of ‘to cook’, we use cocinar to describe the process of cooking and preparing food so we’re able to eat it. Below are some examples that show you the elements that you need to build your own sentences.

Notice that if you want to talk about the thing that you’re cooking, you can use a noun. Additionally, you can use the following expressions to describe the the cooking method that you’re using:

Cocina los frijoles a fuego lento.
Cook the beans on a low flame.

¿Quieres que cocinemos pescado para tu cumpleaños?
Do you want us to cook fish for your birthday?

Antes cocinaba diario, recientemente he comprado comida preparada.
I used to cook every day, but recently I have been buying prepared food.

Take Note: When talking about cooking, the preposition ‘a’ can be used to talk about the cooking technique or method that you’re using. For example, a las brasas (on the coals), a la parrilla (on the grill), etc.

Here are some expressions that are popular in Spanish that use ‘cocinar’ and that could help you improve your conversations.

Cocinar algo: This expression means that someone is plotting or devising something against another person. It can be translated as ‘to plot or ‘to hatch’.

Meterse hasta la cocina: In sports, this informal expression is used to say that a player has scored easily without being stopped by the other players. In this case it’s translated as ‘to slice or burst through the defense’. It can also be used to describe that a person sticks his or her nose into another person’s business. It can be translated as ‘to meddle’ or ‘to sick your nose’.

Synonyms of ‘Cocinar’ in Spanish

Hornear: Although it’s usually translated as ‘to bake’, ‘hornear’ is used to talk about baking and cooking food in the oven.

Preparar: When talking about combining ingredients and preparing food, we can use this verb which is the direct translation of ‘to prepare’.

Cocer: In Spanish, ‘cocer’ can be used instead of ‘cocinar’ when talking about boiling or cooking meat or vegetables. It can be translated as ‘to cook, or ‘to bake’.

Guisar: If we are talking about the cooking ingredients in a sauce or broth, we can use this verb ‘guisar’ instead of ‘cocinar’. This verb is translated as ‘to stew’.