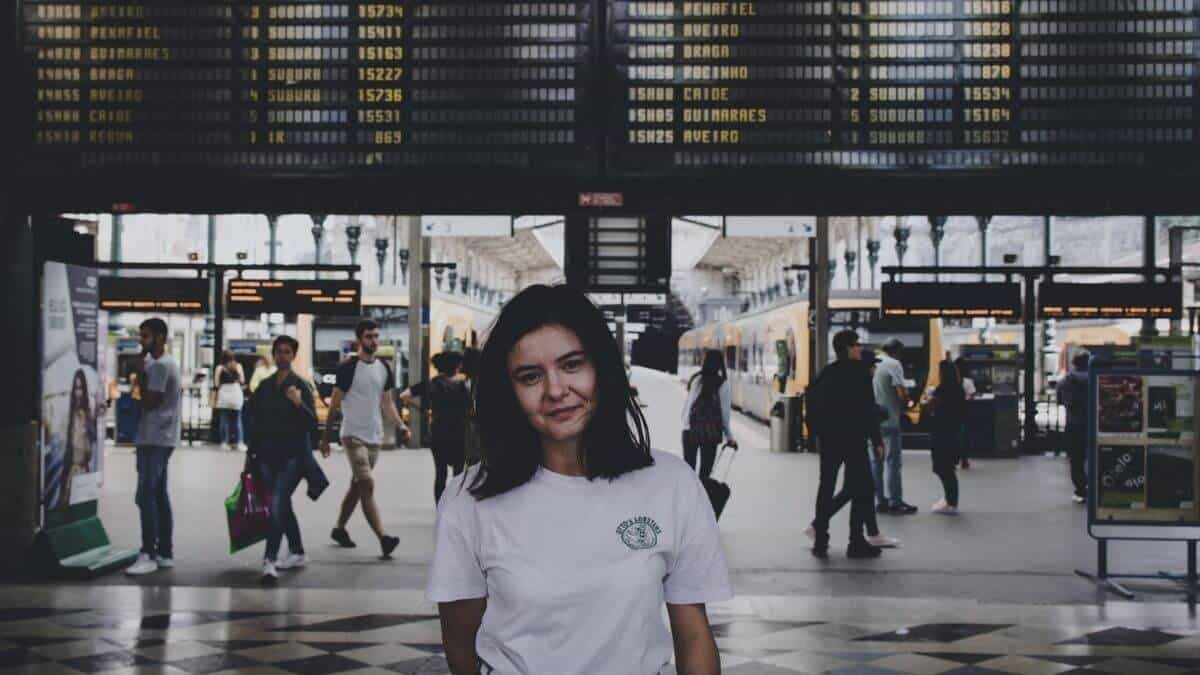 In this short guide, we will cover the following topics for ‘llegar’ in Spanish:

What does ‘Llegar’ mean?

In Spanish, ‘llegar’ has multiple meanings. However, it is mainly translated as ‘to arrive’, ‘to reach’, ‘to get to’ or ‘to hit’. So, as a result, it can be used to describe that a person or thing is arriving at a place and it can also describe someone’s age and distances between two objects.

Below are some of the most common uses of ‘llegar’ in Spanish along with their corresponding translation.

Depending on the tense that it’s being conjugated to, ‘llegar’ may have some irregularities. So, to keep a consistent pronunciation, the regular stem ‘lleg’ will change to ‘llegu’ when the ‘g’ is immediately followed by an ‘e’.

In Spanish, the letter ‘g’ has a soft or a hard pronunciation depending on the vowel that immediately follows this letter. Since ‘llegar’ is pronounced with a soft ‘g’, all the endings that start with an e will change that pronunciation. To avoid that, you’ll use the stem ‘llegu’.

In the conjugation charts below, I’ll explain to you when you need to change llegar’s stem.

Related Resource: How to pronounce letter ‘g’ in Spanish

To conjugate to the present tense, you’ll need to add the proper endings to the stem ‘lleg’.

Notice that to conjugate ‘yo’ to the preterite tense, you’ll need to use the stem ‘llegu’ since the immediate vowel is an ‘e’. Given that the rest of the subjects’ endings start with an ‘o’ or ‘a’, you’ll use ‘lleg’.

When conjugating ‘llegar’ to the future tense, you just need to add the corresponding endings to the infinitive verb.

No tardo, ya estoy llegando al estacionamiento.
I’ll be there soon, I’m already getting to the parking lot.

Todavía no ha llegado mi pedido.
My order has not arrived yet.

Si hubiéramos usado el auto, ya habríamos llegado.
If we had used the car, we would have arrived already.

Espero que Luis haya llegado a tiempo a su cita.
I hope Luis was on time for his appointment.

Si hubieras llegado antes, habrías alcanzado pastel.
If you had arrived earlier, you would have found cake.

Notice that to conjugate ‘nosotros’ and ‘ustedes’ to the imperative form you’ll use the stem ‘llegu’. Also keep in mind that in the negative imperative form, you’ll need to follow the present subjunctive conjugation.

Lleguen antes de las 7.
Get there before 7 o’clock.

No + [‘llegar’ in present subjunctive] + [complement]

No llegues tarde.
Don’t be late.

Laura, no llegues a la tienda, sí tenemos leche.
Laura, don’t get to the store, we have milk.

How to Use ‘Llegar’ in Spanish with Examples

In Spanish, the verb ‘llegar’ has multiple meanings. In the next sections, I’ll show you the main ways in which you can use this verb. I’ll also include examples accompanied by their phrase structures, so you are able to create your own sentences.

To talk about arrivals

When talking about someone or something reaching a destination, ‘llegar’ is translated as ‘to arrive’, ‘to reach’ or ‘to get to’. To indicate the particular place of the arrival you’ll need to use the following phrase structure:

¿A qué hora llegaste a la casa?
What time did you get home?

Avísame cuando llegues a Boston.
Let me know when you get to Boston.

Quiero dormir en cuanto lleguemos al hotel.
I want to sleep as soon as we get to the hotel.

You can also talk about the specific moment someone arrived at a place by adding the date or the time of the day.

Anoche llegué a las 3 am.
Last night I arrived at 3 am.

Llegaremos aproximadamente a las 8.
We will arrive at approximately 8 o’clock.

Related Resource: How to Tell Time in Spanish

In Spanish, ‘llegar’ can also be used to describe the age someone has reached. In this context, ‘llegar’ is close in meaning to ‘to reach’ or ‘to get to’.

Con esos hábitos no llegarás ni a los 60.
With those habits, you won’t even reach 60.

No entiendo cómo llegaste a los 50 tan saludable.
I don’t understand how you got to 50 so healthy.

Me voy a jubilar cuando llegue a los 48.
I’m going to retire when I reach 48.

Take Note: Keep in mind that ‘llegar’ in this context means ‘to reach a certain age’ and is not used in the same way as ‘cumplir años’ which describes someone turning a certain age. This is because ‘llegar’ is used to refer to different stages of your life like youth and old age without specifying a number.

You can also use ‘llegar’ to describe the distance that something or someone has reached. So, in this situation, ‘llegar’ can be translated as ‘to reach’ or ‘to go all the way to’.

Esta carretera llega hasta México.
This highway goes all the way to Mexico.

¿Crees que estos cables lleguen al otro lado del escenario?
Do you think these cables can reach the other side of the stage?

In Spanish, it’s very common to talk about heights by putting them into perspective in relation to another object. To do this, you’ll need to use indirect pronouns to indicate that one height is relative to another.

Mi hermano me llega a los hombros.
My brother reaches my shoulders.

In Spanish, we frequently use the verb ‘llegar’ to give emphasis and point out unusual or unexpected situations. Although it can have a similar connotation as the word ‘even’, its translation depends on the sentence where it’s being used.

Teníamos tantos problemas que llegué a pensar en el divorcio.
We had so many problems that I even thought about divorce.

Él nunca llegó a levantar la voz.
He never went so far as to raise his voice.

Cuando estuve enfermo, llegué a pesar 10 kilos menos.
When I was sick, I came to weigh 10 kilos less.

Although you might not be familiar with this meaning, in Spanish, ‘llegar’ is also used when talking about future goals. In this context, this verb can have different translations depending on the elements that it’s working with. However, it is usually translated as ‘to become’  or ‘to get to’.

Su sueño es llegar a ser presidente.
His dream is to become president.

Me gustaría llegar a trabajar en Hollywood.
I would like to get to work in Hollywood.

To describe that someone received something

In some contexts, ‘llegar’ means ‘to receive’ or ‘to get’. In these cases, you’ll usually see this verb accompanied by indirect pronouns which help you explain what are the things that you’re receiving.

¿Te llegó el correo que te envié?
Did you get the email I sent you?

Paty, ¿les llegaron las galletas que les mandé?
Paty, did you guys get the cookies that I sent you?

Here are some expressions that contain this verb and that are commonly used in Spanish:

Hacer llegar refers to a person sending something to someone else. It means ‘to send’. This expression is used in more formal contexts.

Llegar a fin de mes expresses the idea of having enough money to live on until the end of the month. It is very close in meaning to ‘to make ends meet’.

Llegar a un acuerdo describes reaching an agreement. It can be translated as ‘to come to terms’.

Synonyms of ‘Llegar’ in Spanish

Durar refers to the time that something goes on for. Its translation is ‘to last’.

Alcanzar is translated as ‘to reach’. When used as a synonym of ‘llegar’ it’s used to talk about distances and heights.

Recibir is the direct translation of ‘to receive’. It is used in more formal contexts.