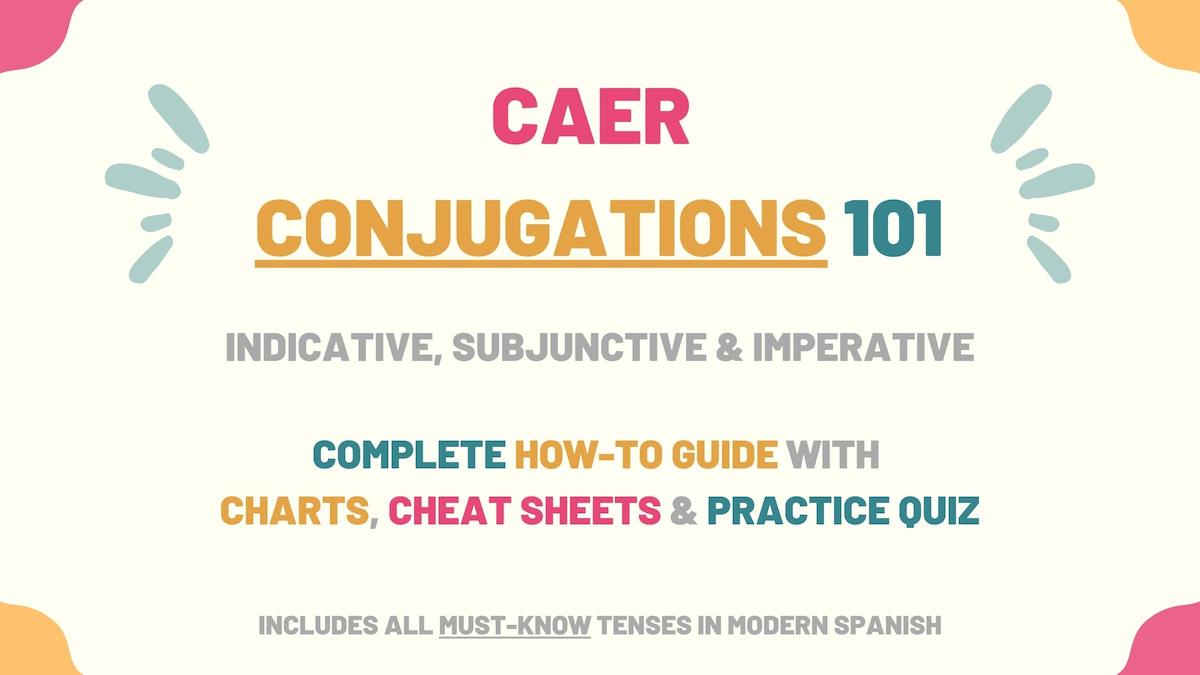 Caer is a common irregular -ER verb in many tenses. However, it’s an important verb that can help you convey useful information in Spanish. So, in this guide, we’ll learn how to conjugate caer in Spanish along with its most common uses. Here’s an overview of what we’ll cover:

Since the verb ‘caer’ has multiple meanings, the explanations and examples for each conjugation chart will only describe its use for one of its meanings in order to keep descriptions brief. However, using its other meaning does not change how it’s conjugated.

Caer conjugations in the present tense are regular, except for ‘yo’. In this tense, caer expresses that someone or something falls. For example: Mi hermanita se cae todo el tiempo.

Caer preterite conjugations are irregular. Notice that most conjugation endings have an accent mark. Additionally, with the third person singular and plural, we must replace ‘i’ with ‘y’ to keep pronunciation consistent.

The past preterite of caer communicates that someone or something fell at a specific time in the past. Ayer me caí de la bicicleta.

Caer conjugated to the past imperfect tense conveys that something or someone fell repeatedly in the past. You can also use these forms when it’s unclear when someone fell. Mi hermano siempre se caía de la cama.

Use the near future of ‘caer’ to express that someone or something is about to fall. For instance: Cuidado, te vas a caer. The near future is formed with ir (present tense) + a + caer and can be translated as “going to fall”.

In the future tense, caer is a regular verb. Use the future conjugations to express that something or someone will fall at some point in the future. Ten cuidado o te caerás.

The conditional conjugations of caer convey that something or someone would fall or like someone if certain circumstances are met. Si fuera más amable, la chica nueva nos caería mejor.

Haber in the present tense + caído (past participle) is the formula of the Spanish present perfect tense. These conjugations communicate that someone or something has or hasn’t fallen. For instance: ¿Alguna vez te has caído de la bici?

The past perfect conjugations of ‘caer’ are used to express that something or someone had fallen before some other reference point in the past. Cuando llegué, la niña se había caído de la silla. To form the past perfect, use the imperfect form of ‘haber’ and the past participle form of ‘caer’.

Caer to the future perfect tense expresses that someone or something will have fallen by or before a certain time in the future. These conjugations are also used to express that something might have fallen. For instance: ¿Se te habrán caído las llaves?

The conditional perfect conjugations of caer are used to convey that something or someone would have fallen as long as a past condition had been met. For instance: Si hubieras tenido cuidado, no te habrías caído.

Use the progressive tenses of caer to express something or someone is falling at the moment of speaking. Or, in the case of past forms (preterite and imperfect), to communicate that a past action was in progress when something fell. For example: Me estoy cayendo de la silla.
Spanish progressive tenses are conjugated by using the formula estar + present participle of caer.

Haber in the present subjunctive + caído is the formula to build the present perfect subjunctive of ‘caer’. When using this tense, ‘caer’ conveys uncertainty about someone falling. ¿Crees que alguien se haya caído?

Use the imperfect subjunctive conjugations of ‘caer’ to refer to past suggestions, wishes or expectations you had about someone or something falling. No quería que los niños se cayeran.

Note: The table above doesn’t include caer’s conjugation for vosotros as this pronoun is not used in Latin American Spanish.

In the past perfect subjunctive, caer conveys that someone or something would have fallen if a past circumstance was met. You can also use these conjugations to express regrets or hypothetical results if someone had fallen.
For example: Si nos hubiéramos caído, nos habríamos roto un brazo.

The affirmative imperative of ‘caer’ is used to command or instruct someone to fall in a certain way. For example: Caed en el colchón. ‘Usted’ and ‘ustedes’ use the irregular stem ‘caig’.

Use the negative imperative to order someone to not fall for something. For example: No caigas en sus mentiras. Since they’re based on the present subjunctive, all the negative commands of ‘caer’ are irregular.

Now that the caer conjugation charts are fresh in your mind, check the following examples to see the most common applications of this verb.

¿De dónde te caíste?
Where did you fall from?

¡No caigas en su juego!
Don’t fall for his game!

Take Note: Use reflexive pronouns (caerse) anytime you want to express that a person falls from one place to another.

Tu novio nunca me ha caído bien.
I have never liked your boyfriend.

¿Crees que le caeré bien a tu familia?
Do you think your family will like me?

Take Note: When used to talk about liking and disliking people, caer behaves like ‘gustar’. To learn more about these verbs, check my guide on how to conjugate verbs like ‘gustar’.

Download a copy of the ‘caer’ cheat sheets PDF. It includes everything you need – conjugation charts for all the tenses, the verb’s meanings, uses, translations, and synonyms.